I've dreamt of this for a long time - sitting in my own house with the doors open onto the back garden with a rum & coke, writing about the mods I've made to my kit car. Ahhhhhhhhhhhhh

It's not even spoilt by the e-mail from my solicitor saying my soon-to-be-ex-wife wants to add a statement to the divorce agreement saying I'm doing SO well I can afford to work part time while she has to get an extra job to support the children. To be clear, she wanted the divorce (utterly devastated me), the "children" are 26 & 23 & both work & I have had little work since December & none at all since April.

Today was mostly spent painting the bonnet of the Quantum, it looks good, I shan't know how well it's gone until the vibration from the engine has cracked the paint - or not, but so far, so good. It'll be up fo sale soon, so maybe I should tke the advertising photos now? 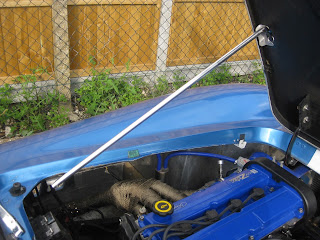 But the point of the title is todays job on the Stylus - I have once or twice called it "the Fury" - is that OK or is it like calling your girlfriend by the previous gilrfriend's name? I must admit to adding a little weight, on the other hand I've gained a passenger seat because I no longer need to carry a 4ft stick around to prop the bonnet open with. This is also a slightly momentus occasion because the Stylus has gained it's first Harrier part, a forged bracket (not a forgery - it was made by being forged) that failed inspection & it now serving as the prop reciever. 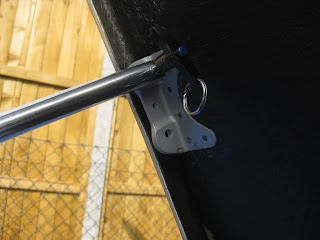 Yesterday I fitted a grille over the radiator - it came with a nice piece of mesh that had been siliconed into the rad intake using at least 1/2 a tube of silicone, the previous owner had removed it, but that left the rad unprotected. When the car was supercharged there was presumably a charge-cooler in fromnt of the rad, I used the threaded bosses to attach a cut-down mesh with sides folded for some stiffness so now any rabbits or pheasants entering the big hole at the front will get slowed down (or possibly diced) before they hit the rad.

Other things I've found out about the car:-

It's really VERY DIFFICULT to get the sump plug out - I managed, but I was expecting the hex to come off it at any moment.

The wheels arn't very safe - the wheelnuts only have 6 turns of engagement, which equates to about 9mm, or only 3/4 of the stud diameter. On the back I've fixed this by removing the wheel spacers (3/4kg each of unsprung, rotating mass) but the front I guess I'll live with by regularly check tightening the nuts until I get the wheels sorted.