And so it begins.


Although the “Rogue Runners” 2015 road trip begins tomorrow, today I drove the Fury (through the rain) to work with a plan to go home via the south coast, the route will then allow opportunities to see the west north & east coasts as we go on our merry way, so four coasts, about 34 counties, 2 ¼ thousand miles – in a week. What could possibly go wrong?
Well – rain for a start. It’s forecast to P-down today, but should clear by the time I leave work with a bit of luck. Also, I need to be at M25 Junction 10 at 04:50 tomorrow, so that’s fraught with potential difficulties as well – and I still can’t decide whether to take a spare wheel or not.

But after lunch the sun came out & I headed south to collect my first coast:-
Right now I'm off to bed - early start tomorrow.
Posted by BlatterBeast at 20:50 No comments:

Once again I woke in time to switch off the alarm before it went off. I had been planning to go to the kit car show at Stoneliegh, but the weather forecast was beyond "inclement". so with some blatt time in the bank I booked myself in with a run going into the wilds of Kent.

For many years I have heard rumour of "the Lydd ring" & "the Military Road" & today was my chance to sample them - they were not found wanting.

I set off from home & while stuck at lights in Guildford, noticed a little smoke / steam from the bonnet vents - what could that be? I pressed on & just after I joined the M25 I wondered if I replaced the oil filler cap when I topped up the oil ............... 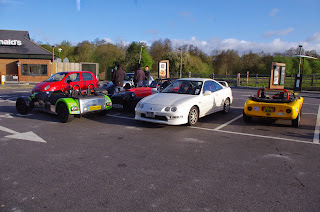 When I left the motorway 3/4 hour later I had the chance to lift the bonnet & sure enough oil had sprayed around the engine bay, BUT the cap was resting on the starter motor!

Cleaned up, I headed on my way & reached the meet point at the right time, topped up the tank & joined the crew.

We headed off at "a good pace" & after a while I was passed by the thunderous roar of the red tractor. I hung onto the coat tails of the two big power cars for a while, but traffic happened & I lost touch. Then the white Teg appeared & we went along together until a new housing estate confused my sat-nav. 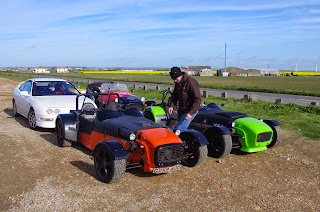 During a short rest near the beach at Camber (when I irritated a Saab driver), we wondered what had happened to the sixth member, it turned out he has requested the assistance of the RAC man but would meet us for breakfast. So we headed back out. 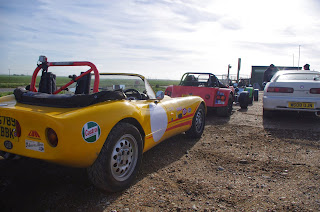 Now the roads were almost traffic free, although I did get dropped again in some. There were more glorious road, some with surprising Transit vans lurking round blind corners to keep the pulse rate up, but then a flash of white on the horizon suggested I'd caught up with the Teg & just as well, as without finding it I'd have driven straight past the breakfast venue.

The breakfast at the Fishery got full marks from me & it was a very good setting, but after the usual SKCC banter & the arrival of our RAC assisted friend, it was time to move on, fortunately for me I was heading in the other direction to the estimated 40,000 motorcyclists heading for Hastings & even in spite of solid traffic on the A3 (which I avoided) I was still home just after mid-day. 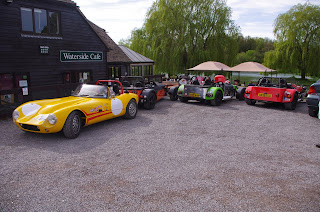 Posted by BlatterBeast at 21:53 No comments: