As promised a picture of the car be-spotted. 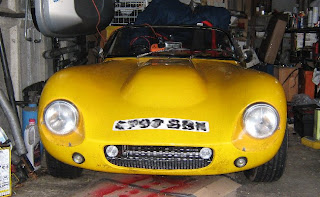 As ever with electrics, there are "issues", I switched on the main beam & my ears were assaulted by an unfortunate weeeeeeeeeeeeeeah noise. I established the this was emanating from the buzzer that goes Weeeeea - weeeea - weeeea in time with the indicators. I wasn't about to try & establish why when it was -0.5c so I put the bonnet down - then noticed that the indicator was on with the lights, not flashing, just on - so I'm assuming that there's an earth problem - shouldn't take too long to sort. I want them working as there's a chance of a Western blat this coming weekend.
Posted by BlatterBeast at 17:07 No comments:

No blatting this weekend - my wife's cousin that we haven't seen for eight years came-a-calling, & as the kids were all out I was duty bound to put in an appearance, not that that was any hardship. probably just as well really 'cos when I tried to start the Fury to get the week's shopping, it wouldn't start (low battery). On the up-side, I've fitted - but not finished wiring - the spot lights. These were an e-bay purchase for the princely sum of £8 from Bulgaria, they are very small & the Fury's main beam could do with - how should I put this "augmenting"? No pics I'm afraid owing to having to pick up No.2 daughter just as the last light was fading. I'll photograph them next week when I finish the wiring.

In other news, another SKCC member has started a blog here:- http://indynash.blogspot.com/ well, I aways was a trend-setter. Ahem.
Posted by BlatterBeast at 18:31 No comments:

For a couple of days I've been struggling with YouTube, the account was registered to my work e-mail, but the firewall won't let us see YouTube & I'd forgotten my password so every time I asked for a new password, it sent the link to work, but it had expired by the time I got home. Anyway, sorted now, here it is. According to the GPS log I didn't get close to the speed limit - which is good.

Posted by BlatterBeast at 18:08 No comments:

Setting off in the cold & dark, I was ½ way there before the sun came up, at about the same time I remembered that I hadn’t torqued up the wheel I’d taken off to do the electrics yesterday, so I pulled over & sorted that – one of many pullings over on the way there, I had to stop about every 10 mins to wipe the inside of the windscreen – cars with deflectors have some advantages then.
I also stopped on Cooden Beach to take a few “B” (beach) pics for the club photo comp. 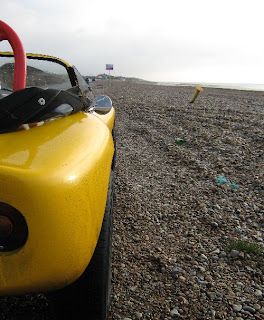 As I arrived at the cafe, so did Freddie, a member of the club that hasn’t been on a run before, we chatted for 15 mins or so until the growling of several none-too-well-silenced exhausts signalled the approach of the rest of the SKCC.
Breakfast & banter was the next task, & was despatched with enthusiasm – I took the opportunity to grab photo “F” (five cars)& then it was back along Cooden Beach, through Eastbourne & up across Beachy Head, a wonderfully alpine piece of road - that is it felt like we were driving over a rockery, smooth is one of several word I wouldn’t use to describe it.
Shortly after that I took my leave of the SKCC & went to visit an old friend in Seaford, after which it was home by the fastest route. 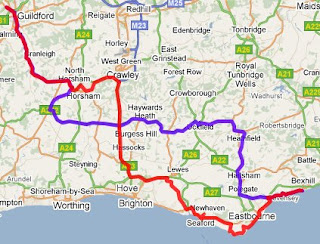 After someone stopped me on the way home to say the Fridge's brake lights weren't working & they'd "nearly driven into me twice" (twice? don't you leave a bigger gap after the first time?) I set to finding out why - in the cold & the sleet (OK, only very occasional, very light sleet) I took off the tow hitch, the bike rack mount, the rear bumper cover - that's the black GRP bit that hides a steel RSJ - & took one of the lights apart. Then struck by a flash of the bleedin' obvious, I checked the connectors onto the brake pedal switch - yes one had come off, so I could've fixed it in 30 seconds from inside the car. Anyway while the back was in bits I took off the old broken "iron cross" high level brake light & set up the wiring for the new small round one that I've lost in the house somewhere. Then I put the car all back together again & went in for a warm. I'm now sorting out the satnav for a blat to Bexhill with the SKCC tomorrow.
Posted by BlatterBeast at 12:13 No comments:

What am I going to do with this? Well if you're not interested in the "odd" end of the motoring spectrum, you're not going to enjoy it much.I intend detailing my motoring life, I like cars - always have, but I'm not overly impressed by anything made on a production line, you've got a Porrari-Marghini? So what. I'm impressed by the engineering, impressed by the Engineers that developed it, but just owning it isn't clever.

So what does float my boat? Hot Rods, Kit Cars, one-offs - things that someone put some inventiveness into, so it you've just bolted a wing & some wheels onto you Golf, or worse still, paid somone else to do it, sorry, that doesn't do it for me either.

Currently I have a Rickman Ranger as daily driver & a Fisher Fury as "something for the weekend" I say "currently" as if it changes, but I've had the Ranger (henceforth known as "The Flying Fridge") since 1996, & the Fury since 2004, though the first six years of that was building it. It passed SVA first time in Feb 2009 (for anyone counting their fingers, the Chassis arrived in 2004, but I'd been stripping the donor car & collecting parts for some time). Recently I've started going on sedate country drives with the Southern Kit Car Club - a bunch of like minded folks who like nothing more than a gentle potter about in lightweight cars, see the SKCC's Page, generally, an early morning wheeled saunter will result in a quiet healthy breakfast at a roadside cafe (I may not be being entirely honest here), Hopefull I'll be able to add a few photos & bit of video to liven it up a bit.
Posted by BlatterBeast at 11:17 No comments: