Once again it's been a while since I've posted, but then nothing much has happened car-wise. I've been on two holidays, my marriage has all but broken up twice & I've met my long lost son - but not much to report car-wise.

However, when I have used the car, I've noticed the oil light come on under hard acceleration, Distressing, as I thought I'd cured this with the sump mods. On the up side, whenever it happened I found the car was low on engine oil & a top-up cured it - for a few weeks.

So why was it using so much oil & where was it going? It wasn't dripping, it didn't seem to be smoking, then I checked the catch tank, it was about full. The catch tank has never filled, even when the car had a cross flow.

Thinking about it, I had removed the enormous Ford oil separator & replaced it with a plate & a banjo fitting, so I looked at that & found a lot of oil inside, could the oil be splashing into the vent & being carried up to the tank by the pressure? There is only a gentle up-hill in the hose, so it was possible. 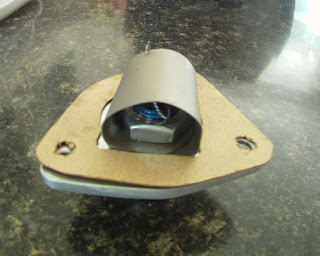 I thought of putting an expansion tank in the hose run, but that would achieve no more than the catch tank, I thought of another couple of ideas, but went off them. Then I remembered a similar blanking plate for the crossflow. The cheap ones are just a plate, the more expensive ones have an "oil deflector" presumably to stop the oil hitting the seal directly & leaking. What if I put a "shroud" over the vent, to stop the oil splashing onto it directly, only the fumes would get to the vent.

So I found some very thin titanium sheet in the garage & drilled it for the  vent size, then wrapped it round as you see here:- 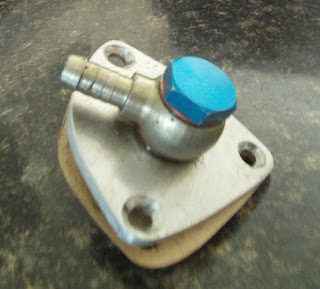 The fitting is still wire-locked inside the sump so can't come apart, so I'm hopeful this will fix the problem I gave myself (sigh).
Posted by BlatterBeast at 13:45 No comments: