Last Friday was Friday the 13th. I had just got the Fury roadworthy again after 6 weeks without rear upper wishbones, also, it hadn't rained for six weeks - guess where this is heading......

In my haste to get the car back on the drive & under cover, I threw the house keys into the passenger seat & pushed the Fury into the garage. As I left, I thought "I'm finished in there, shall I lock the garage? might as well", I walked to the house to find it locked & only then remembered that the house keys were locked in the garage. I sought shelter on a garden chair under a garden umbrella & sent a text to my wife asking when she'd be home because I was locked out & was getting wet. No answer.

After 20 mins I wandered dejectedly round to the front of the house to find her car parked there & knocked on the door - she opened it - apparently her phone was on silent! 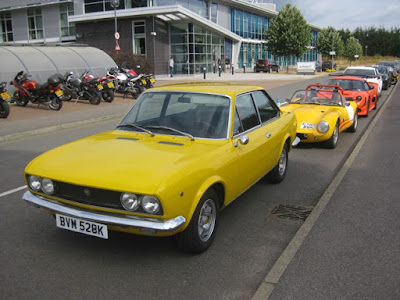 Today, was not like that. Today featured a lot of crane diving, which is good & also my work's "wheels day" where anyone with an interesting vehicle is invited to park along the front of the building & take folk for a ride round the research park in exchange for a donation to charity. There were some brightly coloured interesting cars & some grey German cars - some Porsches & a 5 series Alpina, to be honest I got bored & zoned out while walking past them. There were also some motorcycles - old Triumphs & a Laverda Jota. 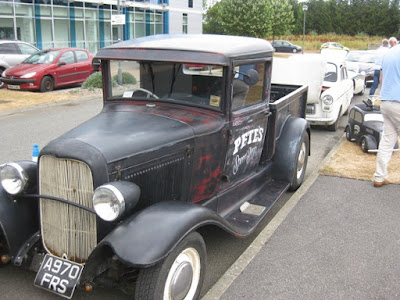 Of the interesting stuff there was a Fiat 124 coupe, a new Mustang, a Noble, an Austin Healey 100 & the Blatter family's show fleet. There was obviously the Fury, there was my Brother's Model A truck, my Nephew's "patina'd"100e Anglia, & the electric "mini pop", which went down very well indeed.

My nephew drove the Fury round the research park & came back with a silly grin saying "that car is so fast" - can't see how he'd know that - it's a 20 limit. 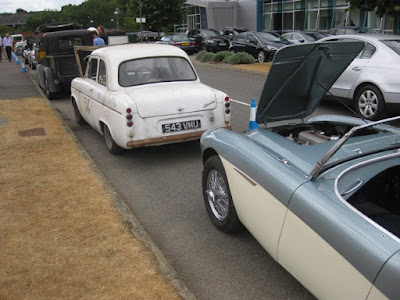