As I may have said, the car is all done except for one front shock "clicking". I had previously looked at the website & seen that Protec would strip - clean - re-fill & re-build shocks for a very reasonable price, so decided to post the front pair off to them.

But in the mean time two things had happened:-

Thing one was I'd gone on the Protec website again to find that the service package wasn't there (it was, I just couldn't find it on my phone).

To ask about Thing one, I called Protec & they confirmed that they do indeed still re-build their shocks & it only takes 1/2 an hour or so, so I decided to drive the shocks there myself.

On arrival I explained the problem to be investigated & went in search of coffee & cake, what I found was that Melksham (where they are based) has fuel at least 10p / litre less than at home, so I filled the Cactus' tank, boot & two of the footwells, and found cake before returning.

True to their word, the shocks had been stripped, checked, re-filled, re-built & re-appeared from the workshop as I arrived. I even got a small discount as I was there in person so they didn't need to post them back to me. 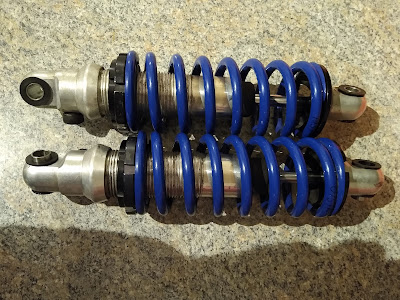 There was no obvious source of the clicking, but one valve looked a little suspect & the valves were swapped for their latest spec ones. They are already re-built with the springs & bushes & I just need to adjust the springs pans back to where they were set & they can go back on the car.

Lovely to be able to report excellent service.

Posted by BlatterBeast at 19:18 No comments: 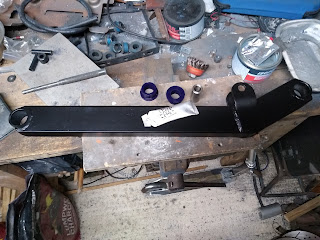 With a couple of evenings in the garage I've finished all the jobs that needed doing over the winter, except for sending the front shocks off for refurb. the last things were to swap the rock hard bushes in the rear lower arms for softer ones & work out why thehandbrake was PANTS & with that done I can relax. The handbrake was (I think) a combination of a badly engineered cable system & the arms on the calipers being sticky, so while I've freed them off, I may need to remove them from the car & give them a proper going over.
Posted by BlatterBeast at 17:20 No comments: