With foul weather promised for the weekend it looks like the CVH Quantum has travelled it's last - long live the Zetec Quantum!

Things have begun slowly, but they have begun. The two new sub-frame rails have been made & the engine mounting has been modified to fit the engine. I need to get some M10 bolts, but that's a small matter & will pop over to Margnor probably on Friday.

My welding is getting better - helped by the steel being at least 2mm think. 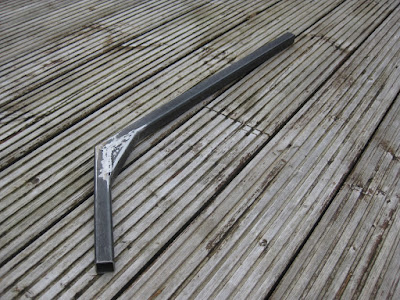 The plan I followed suggested putting a single gusset across the bend in the tube, but if there were to be any flex in the joint, the gusset would be pushing on the flat metal between the corners & would do little to prevent the flexing, so I cut & shaped an off-cut of the 1" box tube so each horizontal web is supported directly, it's not a huge amount stronger, but it is less susceptable to fatigue. It's over-length at the moment, it'll get trimmed to suit when the old one is cut out. 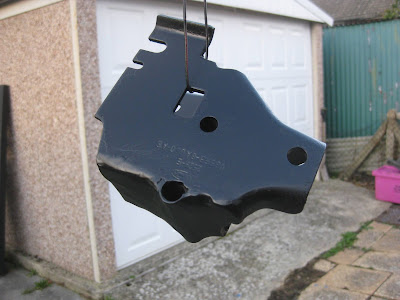 The engine mount is cut, welded, cleaned up & painted ready to get bolted on as soon as I get some bolts.

Posted by BlatterBeast at 19:15 No comments:

Last Run Out Of The Year 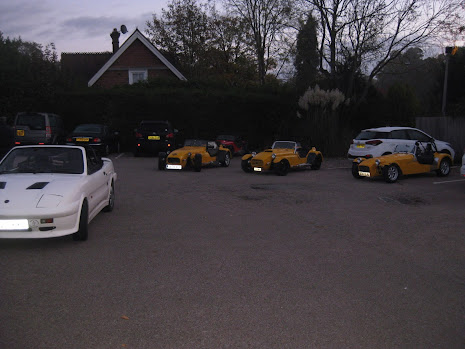 Seems a bit early to be saying I've been on the last run I'll go on this year, but there you go - it's been a funny old year.

The alarm went off at 05:30 & I left the house at 6 - with the roof & side windows down. The meet point was somewhere I'd never been, so I was pleased when I saw the cars in a pub car park & turned round & went back.

After the last of our number arrived, we set off. I went last to avoid holding anyone up, but when we came to a tee junction the five ahead of me got out easily - me, not so much, I kept up (ish) & then at the next tee junction again five sevens got out with a clear road, I wasn't going to make it - but the car on the main road slowed to allow me out! I wasn't really in a fast mood & was slowly dropping back, but then caught up at anothe tee junction, only to have the same happen again, five got out, but the traffic on the main road was a queue of about a dozen. This time I had no chance.

But not to worry, I pootled along hapilly & after a while a voice over the radio said "Tony , can you hear me" & a few seconds lated I found the sevens in a lay by.

After the usual "comfort stop" we set off again & after not very long on a small road I caught up with the others stopped & could see someone standing with a horse at the side of the road. I fully expected that our lead car was getting a berrating, but it turned out he was getting thanked. The horsey person in question had been struggling with a "flighty" horse & we'd gone slowly up the road & waited while they got the animal sorted.

Inevitably I dropped behind again, I just wasn't "on it" that morning, but I rolled into the breakfast venue as they were climbing out of the cars at Sumner's Ponds caravan site. All was not well though. They weren't letting people sit inside, you could only order breakfast by downloading an app & there was no phone signal so you had to connect to the WiFi first. We looked at the A4 sheet full of instructions & decided to go to the Chalet.

I knew I had the Chalet in my SatNav so quickly jumped in the car, did up the three point seat belt started the engine & set off thinking I'd at least be first on one of the sectors. I followed the SatNav along some country lanes & then onto an A road, there was a bit of space ahead of me because I was only doing 45 or so. Imagine my delight when the five sevens pulled out of a side turning ahead of me! Last again. 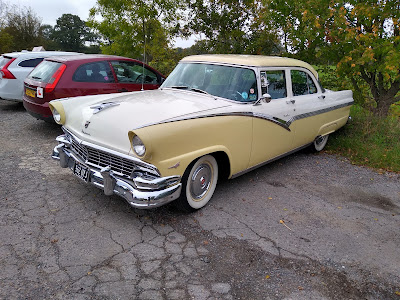 Anyway, there were no mobile phone shenanigans at the Chalet, we sat down indoors, ordered at the till & paid with money. We had our faces covered, we kept a reasonable distance, we licked no strangers - all the sensible stuff & we sat chatting for an hour or so. All very pleasant. As usual there were some interesting things in the car park. 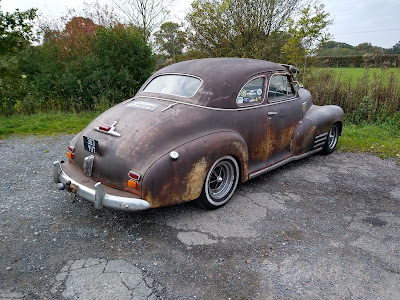 Posted by BlatterBeast at 18:53 No comments: 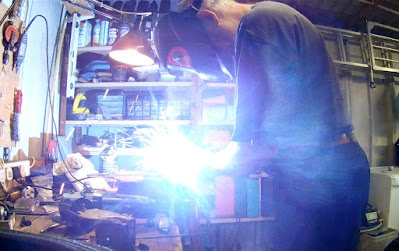 I have been doing some measuring up & I'm pretty sure the inlet manifold that came with the engine won't fit. I have an ebay serch going for the right one, but so fr the only thing that come up is a pair of bare castings - in Italy.

I think I'm going to have to contruct something to take all the parts from the plstic inlet. We'll see what happens, there's time for the right thing to come up yet. 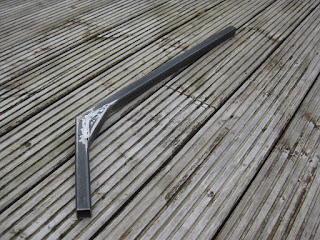 Today I started making up the new elements for the engine cradle. The upper offside tube needs to run straight forwards & turn in, rather than running diagonally. this means it'll clear the cam wheel cover. I wont be cutting out the diagonal one until the engine's out, but I've made up the braced angle so it can be welded in as soon as the old one's out.

There's a car club run tomorrow, so that'll empty the fuel tank & then it can go on SORN from the end of the month

Posted by BlatterBeast at 16:42 No comments:

I never said I wouldn't modify the Quantum.

I never said that.

Life hands us some odd co-incidences, the Fury came from Fisher Sports Cars based in Marden in Kent, Some time after I began it, I was searching ebay for an injected Pinto engine along with it's ECU & injection gear for the Rickman & I found one - in Marden in Kent.

Today, I've picked up an 1800 silvertop Zetec from an Escort GTi (the 130bhp job) along with an ECU, wiring loom, injection gear, starter, engine mount & an ST170 exhaust manifold, that I found on Ebay. It was in Marden in Kent. IT'S ONLY A SMALL PLACE! Getting all this stuff from Kent would be coincidence enough!

So yes, the Quantum is getting an upgrade, installed power going up by oh - about 100%-ish. I was impressed by the car in Wales the handling was really very good - not "very good for a front wheel drive car", just very good, but it ran out of puff on long hills & if I was behind a car doing - say - 50 on an A road, I needed it to be clear from here to the horizon to get an overtake in. If it all works this should give it a similar power to weight ratio to the X-Flow Fury about 175bhp/ton which was good. The Zetec Fury with 300bhp/ton was better, but that car was rear wheel drive.

Not a lot has happened yet, I've done some research & the front subframe needs to be cut & changed - it should be easy enough, the engine goes straight on the gearbox, the ECU will have to be fitted & wired in, the fuel system will probably need a swirl pot & the exhaust will need to be fitted, but in engine swap terms it's small beer.

Since I got it home I've rocked the flywheel enough to know the engine's not seized & I've taken the inlet manifold all to bits. This is particularly annoying because I had an unused one from the Fury's crate Zetec in the garage in Guildford & threw it away on the basis that "I will never need that". The injectors have been tested, one was reluctant, but a little WD40 soon had it clicking merrily, the Idle Speed Control Valve has moved under 12v & the manifold moulding is as I write -in the dish washer. I am supposed to be installing my "spare" dish washer in the garage for parts washing, but I haven't got round to it yet.

So yes, here we go again.

Posted by BlatterBeast at 19:52 No comments: