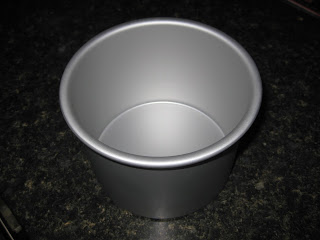 A new part arrived through the post for the Fury today. It's a cake tin, 5" dia x 4" deep, anodised
aluminium. Obviously it's going to get modified & adapted to the purpose I bought it for, but I'm not going to say what that is just yet.

Long story. The car's supposed to look kind of like a barn found late '50s club racer, so the large plastic parts detract from that (yes - so do the blue hoses, I know), some time ago the plastic cam cover got the heave-ho to be replaced by an alloy one which had the "Zetec" & "16v" ground off & was then kind of polished, or polished enough to look like it was polished 30 years ago. 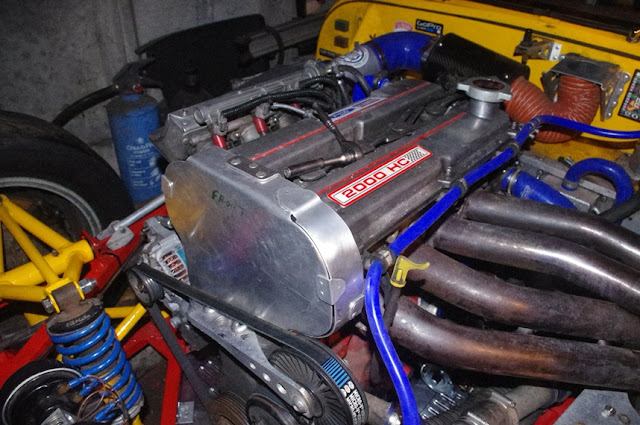 But, there was still a large plastic cam wheel cover. Many people run without them, which was an option, but the thought of a stone getting flicked up & finding its way betwixt cam wheel & belt didn't bear thinking about. But when the bonnet wouldn't close over the plastic one after the winter upgrades (a new engine mount had pitched the engine up / left enough for it to rub) it was clearly time to get out the tools. There's no cleverness about the cover I've made - it'd make a tin-smith cry! 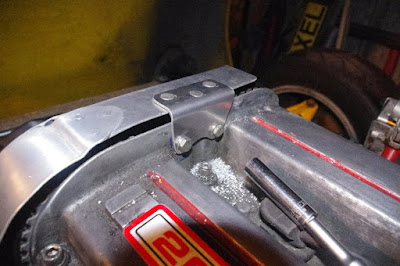 It's basically a plate the size if the cam wheels & a couple of angle brackets holding a flange covering the belt.

It'll need prettying up a bit & it's a few grams heavier than the plastic one, but it does - or at least will - look better, to me at least.

Up at the top there's a nice simple bracket where before there was none, a couple of titanium bolts & aircraft clip-nuts hold the cover away from the belt. 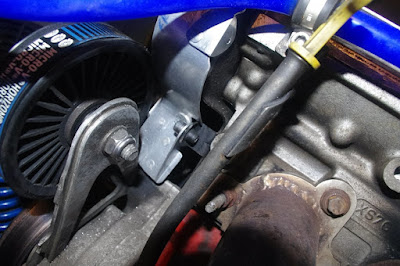 At the front it gets more complex where an angle bracket has to get into an awkward shape, but it's reasonably neat & kind of hidden. I need to work out what to do on the off side where I think I'll need to put in a removable section to make the cover easier to get off than the plastic one was.
Posted by BlatterBeast at 18:22 No comments:

Yes, yes I know it's been a long time since I wrote - a lot of "stuff" has happened, almost none of it to do with the car - which is all you're interested in right?

OK, it's been cold here, properly seriously cold. It hasn't got above 4deg C at all in the last three weeks, most days don't get significantly above zero. S have I been spending long periods in the un-heated garage? No, but with Mrs Blatter away for the weekend, I have sallied forth. Yesterday I fitted a new high level brake light, when I built the car the choice of LED lights wasn't as broad as it is now & I selected a very neat, thin unit which only came in "clear" (it lights up red obv.), but they now make the same item in red which blends better with the roll bar, so as my in-laws had contributed to the car fund with my birthday present, I bought the new version. Fitting it was  bit of a struggle as the wired pass through the roll bar, but not too bad.
Next up was the bonnet prop, the feet of which got pop-riveted this time - last time they were bonded on, but the effort I didn't need to take it off suggested a more mechanical means of fitting it was appropriate. 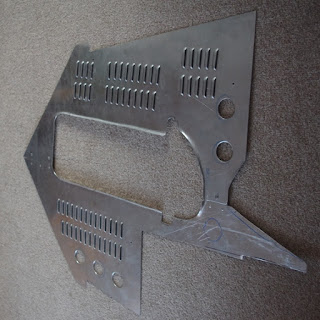 Today I started by bleeding the front brakes as I'd had to remove the wishbones & hubs to do the de-rusting. That done I made a load of small brackets for the belly pan, then did some shaping on the panels for that, made brackets to join the pieces together & generally got it closer to being fitted.

Here it is, still with the mark-up writing on it, just a few more things to do & it'll be getting cleaned & sprayed silver ready to go on the car 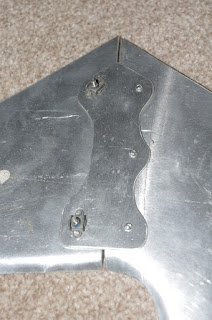 One of the things that took the most time was sorting through my old box of aircraft parts to find fasteners & anchor nuts. I found almost enough, but I'll need to use a different size round the outside edges, which is probably no bad thing.
Posted by BlatterBeast at 17:10 No comments: