I found I photo of my car on a French web site last week - looked like a local news site, so I e-mailed them in google-translated French & asked if I could have a larger version & today he sent it with a reply in google-translated English, so here it is (in reduced form). I like it. 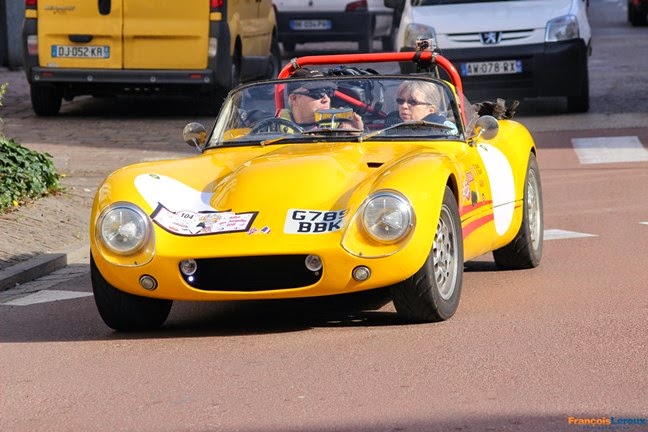 Posted by BlatterBeast at 18:44 No comments:

Today I found this picture on the net. It's a photo of the same ford as I took the Fury through on the same day. This guy didn't make it, all I can say is:- 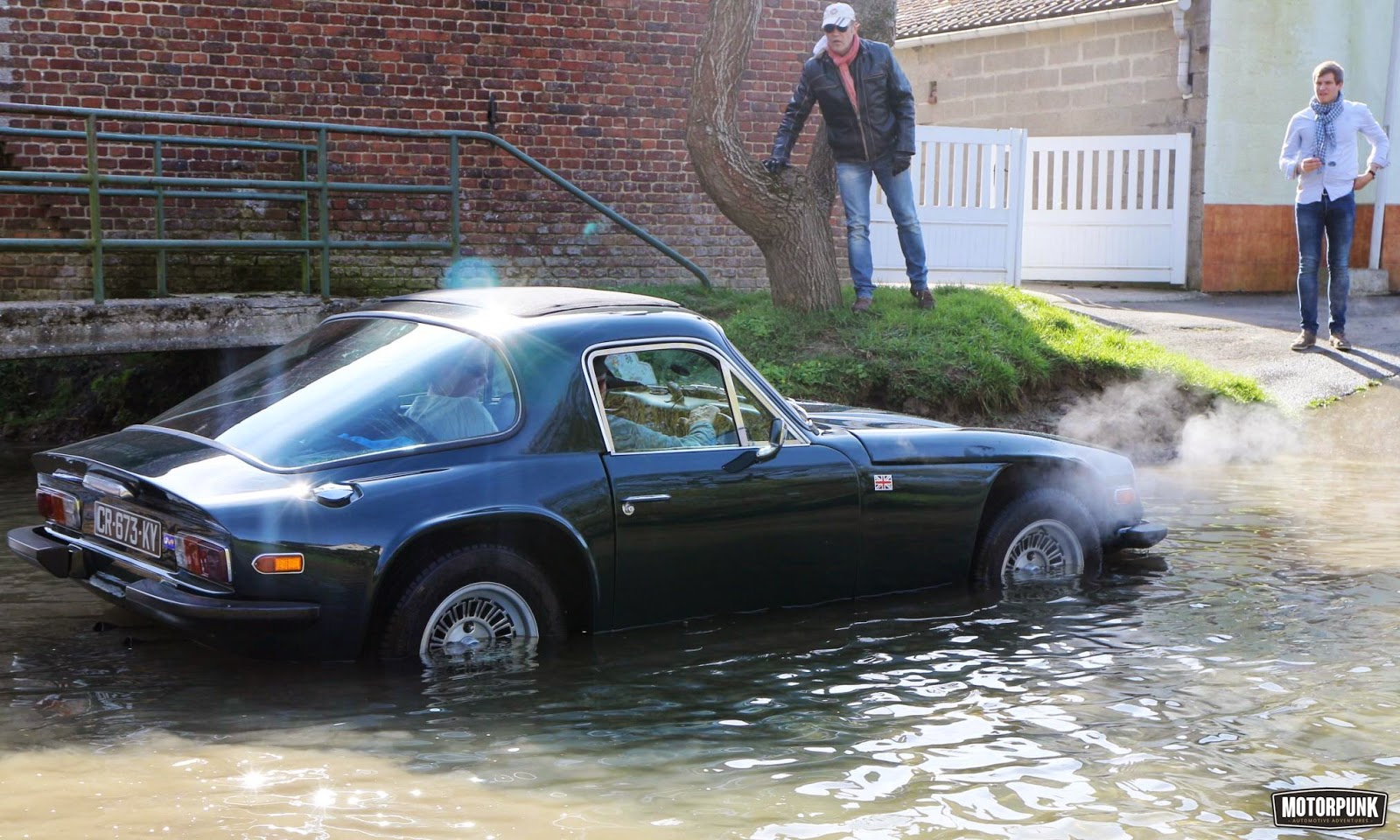 Posted by BlatterBeast at 18:07 No comments:

The weather was typical for this kind of thing, dry sunny & warm Monday to Friday, but the forecast for Saturday morning (when we would be driving a car with no roof across the South-East of England) was dull cold & with a weather front raining exactly while we were on the motorway but dry & sunny as soon as we boarded the train. So, with a wet start in prospect, the alarm sounded at 05:30, not my choice, but Mrs Blatter needed time to collect her thoughts. The car had been packed with the bare minimum the night before, tyre pressures checked, fluid levels topped up, a few tools stowed. At 06:15 I checked “rain alarm” & we were between two bands of rain, one had just passed Folkestone, the other just our side of Bath, hurrah!. So I rolled the Fury out of the garage, left the soft top rolled up & strapped Mrs Blatter down to the passenger seat, got myself in, switched on the toys – the sat-navs, cameras & iPods, turned the key, flicked on the fuel pump & prodded the starter button, the engine fired & we were off – next stop Folkestone.


This part of the journey is dull, all motorway, cold & too much road noise to talk comfortably. But after an hour & a half, we rolled into the tunnel terminal & soon met up with our fellow travellers: Mr & Mrs Mango from Suffolk (Fury), Matt & daughter from Selsdon(ish) (Sparton), Matts mum & dad (Sparton), & the Larks from Kent (GTM). At this point it felt like the weekend had begun properly. Having collected large coffees (thanks Mango), we boarded the train & there were introductions, banter & the breakfast came out, coffee, croissants, pain au chocolat, warming nicely on the bonnet of the Fury just to get us in the mood & before we knew it we were in France, a quick fuel stop & away along the coast. Now we were heading east, away from the rain & Mr Mango had plotted a sweeping route through some fine Gallic countryside. As we sped along I was expecting a sharp prod in my left ribs from Mrs Blatter “encouraging” me to slow down – but it never happened. Excellent, press on.

We were booked into “La Grange Aux Damiers” for lunch, this is the clubhouse for the car club that organises the Rallye, bread, salad & “Rosbeef” washed down with wine & beer – excellent & very continental, while we were lunching it rained, so the covers went on the cars, then it stopped just as we were leaving – perfect. The next stop after more of Mr Mango’s excellent routage was “Le Blokhaus”. Built by the Germans in 1943, it was intended as a self-contained manufacturing & launch site for the V2, but being this close to the UK, it was bombed regularly & never became operational. We wandered round gawping at the size of the reinforced concrete walls & a few vehicles, wondering at the suffering of the forced labour & staring at the size of the crater made by a single “Tallboy” bomb to one side of the Blokhaus, even 70 years on it’s still 60ft deep.


At the time it exploded in the ground beneath the blockhouse & shook it to its core.

After that we moved on along smooth, empty, winding French roads to the hotel & a well-earned rest. 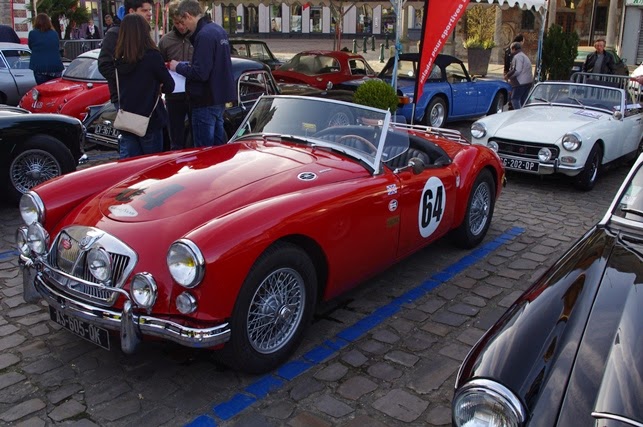 The meal at the hotel was good, with ten of us sat around the table & the usual SKCC banter flowing, the time flew & we retired to our respective rooms. But before we knew it, the alarm was chiming for the trip to Aire-Sur-La-Lys & the Rallye start. Covers were pulled off cars & luggage strapped down – then I realised I couldn’t find my car keys. We searched the room, the car, the luggage – nothing. I even asked the man on reception in case they’d been handed in, but the reply was a Gallic shrug & “Francaise?”, fortunately I'd thought to put the 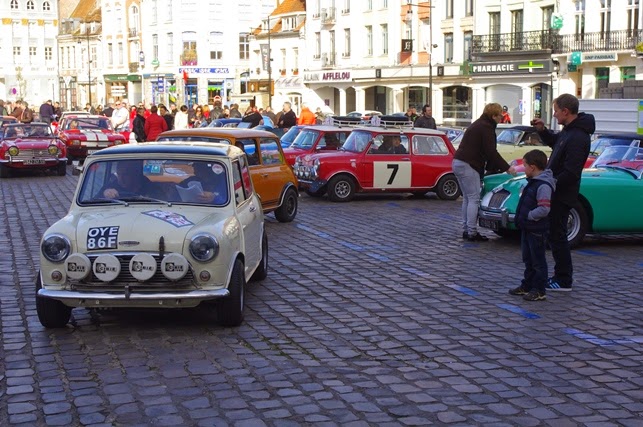 spare keys in the car, so it wasn’t a problem.
As usual there was some “confusion” finding the main town square, so Mrs Blatter & I found ourselves some way from everyone else as we parked up in the town square ready for the off, this meant we were pretty much at the back when we did eventually leave trailing smoke (the Fury has a - ahem - “small problemette” at the moment). But in the mean time we walked round looking at the metal on display & we ate some croissants. 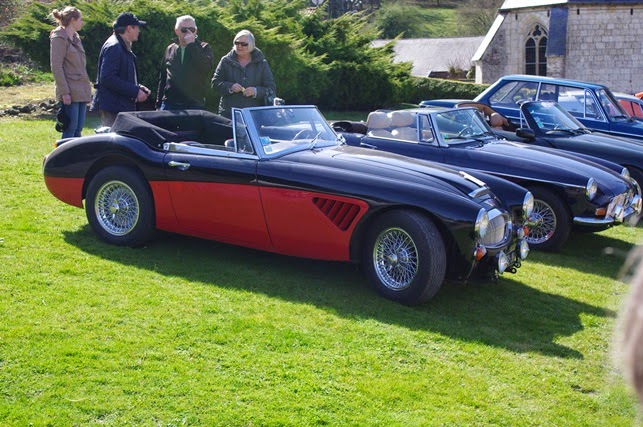 Of course we got lost, this is to be expected on the rapid left-right-left getting out of town, but we looked out for interesting cars to follow & soon regained the thread. After about 1 ½ hours & a great deal of turning round, we pulled in to the Abbaye de Belval for the drinks stop. As we arrived the place was awash with 150 cars parked higgledy-piggledy, we had a drink, bought some more drink from the gift shop & suddenly we were about the only car in the place, we left hurriedly. 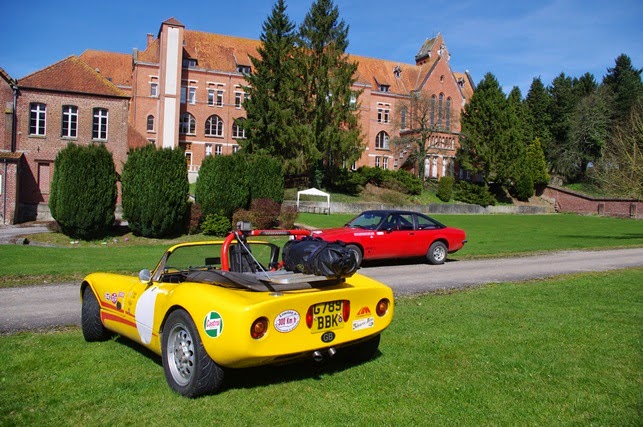 Once or twice we thought we’d caught up with a bunch of cars, only to find that there was a loop in the route & the cars we were seeing were on their second time round, we

rumbled round, at one stage following a Mach 1 Mustang, until it ran out of petrol, we took his position to hand to the organisers in the hope they could get some help to him. We also saw an Exige with a very battered front, but it was surrounded by kindred Lotii, so there was nothing we could do there. When we collected the route book, I noticed “route with ford” & “route without ford”, when we arrived at this point, I rashly decided to go for it & plunged in, I felt the steering go light, I felt the wheels scrabbling for grip & we emerged on the far side. Shortly after this I noticed my trousers moving in the corners – odd. When I had chance, I looked down into the foot well & saw ¾” of water sloshing about.


After about an hour we were flagging & had just decided to stop, set the satnav to the lunch destination & go direct. As I pulled over, Mrs Blatter looked up & said “that sign over there – isn’t that where we’re going?” It was, we followed the signs for 300yds & arrived – but we were late reaching the lunch stop. Fortunately our compatriots had saved us a couple of seats & a couple of starters - & some wine.
The food was very nice & the talk of our adventures flowed, but before long it was time to hit the road for the final stage. Being so late has its compensations & we were in the upper car park, so we were one of the first to leave. The third stage seemed easier, there were more road names to confirm you were going the right way & we were one of the first to arrive back in Aire-Sur-La-Lys ....... albeit from the wrong direction! We parked up & awaited the arrival of the rest of the SKCC. Sadly, there were no prizes for us this year. 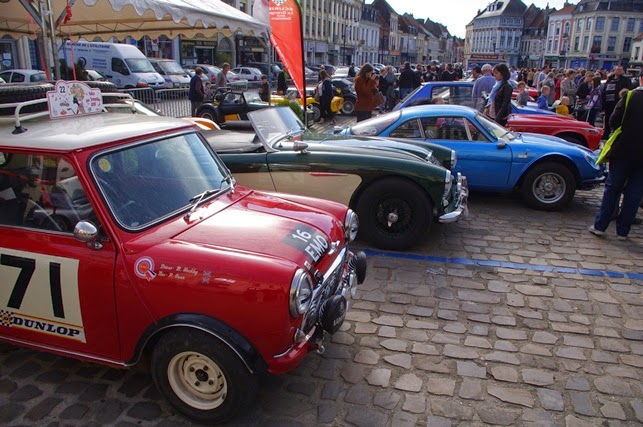 We were all pretty short of petrol by now, so arranged to meet at a local Carrefour before heading home. Mrs Blatter & I extricated the Fury & followed the Satnav, re-fuelled & waited – no sign, after a while I called Mr Mango who’s Satnav it seemed had taken him to another Carrefour, so with little chance of finding them & time ticking towards the tunnel check-in, we again ended up separated, with the Spartans taking the motorway, the Mangos & the Larks on a blatting route & Mrs Blatter & I on the A road with campers & farm machinery. 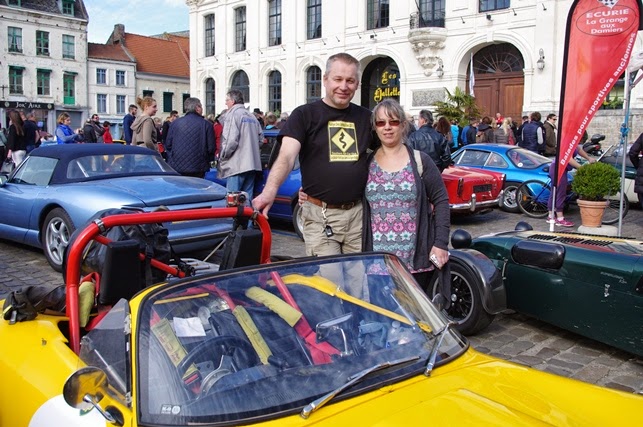 Strangely, we pulled into the terminal directly astern of the Mangos, then waited a full hour to get through UK passport control & onto the train, while the Fury smoked those around it like kippers. 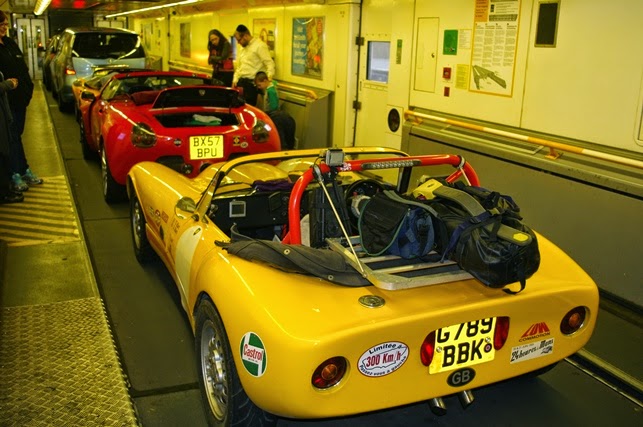 However we did eventually board the train & told each other of our further adventures, before going our separate ways. Even the M20 / M25 didn’t seem too arduous on the way back, but we had no trouble sleeping.


So in short, a thoroughly pleasant weekend, with good driving, good food, good weather & good company plus a certain amount of excitement. As usual the Rallye organisation was faultless, basically there was 3 ½ hours scheduled for driving, 3 ½ hours for eating & drinking.

Now that’s French planning for you.
Posted by BlatterBeast at 18:28 No comments:

A Bout Of Severe Decorating

Only a week to go before the Rallye des Jonquilles & the car is about ready - the esteemed Mr Mango has provided routes which are being loaded to the Satnav even as I write, even Mrs Blatter appears to be looking forward to it , but as every husband will confirm - there is always a price to pay, & on this occasion the price is decorating the front rom over the Easter weekend.

It's always been called "the front room" in spite of the fact it runs from the front of the house right through to the back & it actually at the side of the house. The last time it got decorated was last century, but it has become the lair of teenagers, so I was lothe to take it out of action because then they'd come & talk to us grown ups - well I say "talk".

There was a gas fire in the front room, in the years BC (before children) it had been the boiler for the central heating, but had been condemned & disconnected many years since, but the fire still hung there forlornly. Until I ripped it out a week ago, back boiler & all. So what the do with the gaping hole in the chimney breast. It was decided that if a new thin TV was purchased it could be screwed to the wall & all the cabley gubbins run down inside the chimney to a box in what was the fireplace where the electronic gadgetry would sit (& a nice new vase - apparently).

So I bought some ply - I'll avoid saying I went to Wickes & got wood - & manufactured a box millimetre perfect for the chimney. so perfect that when I slid it in upside-down, it just touched in all the same places because it was dead square. This has "bloke appeal".

Mrs Blatter was obviously impressed, she said "Wow - all those skills you've picked up during an engineering apprenticeship & since, that's REALLY goo....." no, of course she didn't, she said "you're obviously pleased with yourself because you've made a box.

Anyway, I've nearly finished it, so I can get on with more interesting things - like watching the paint drying.
Posted by BlatterBeast at 19:37 No comments: