Another Week - Another Interview.

This week I was interviewed by GKN Aerospace, but this time for the Woking office. Getting this would be "a good thing" as it's the sort of work I'm used to, in the area I'm used to & most importantly at the salary my family is used to. On the same day I was pushed into a descision by my current employer so I declined thier offer of a small pay rise - so I'm REALLY hoping the risk works out!

In other news, I checked the Isle of Wight ferry tickets for this weekend & realised that I'd booked the right days, at the right time, with the right car - just in the wrong direction. I called Wightlink & it was sorted out without fuss. The weather while not sunny, is at least forecast dry, so we should be doing the trip in the Fury, which will be nice - for me - my wife doesn't seem to share my enthusiasm for taking our smallest, noisiest, smelliest, least weatherproof car for a weekend away.
Posted by BlatterBeast at 09:07 No comments: 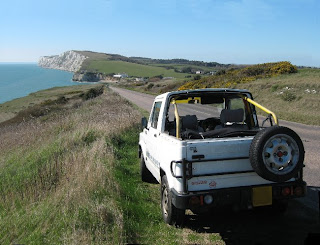 As the more observant reader will have noticed, I am under threat of redundancy at the moment, so yesterday I took the Flying Fridge to the Isle of Wight for an interview with GKN Aerospace as a Design Team Leader. I got there very early & as the sun had his hat on, I drove round the island with the roof down - which was very nice - a bit like being on the set of a Miss Marple mystery. After a picnic lunch on the top of the cliffs, I went for the inverview, which went very well, there's little doubt I could do the job, the only real question is do I want to live on the Isle of Wight? Or perhaps more to the point, do I really want to pay the enourmous ferry cost whenever I leave the Isle of Wight?
Posted by BlatterBeast at 09:13 No comments:

No blatting this weekend, I set about beginning the decoration in the dining room - & the grass needed cutting - & I took the hard top off the Rickman ready for the summer.

To console myself for this lack fossil fueled fun, I've bought the Fury in to work today, not really a blat as such, but better than nothing.

Interviews tomorrow & the next day - GKN & BAES. I hate wearing a suit.
Posted by BlatterBeast at 15:57 No comments:

So, the excitement hadbeen building for a few days, I'd given the car a fluids service & taken the afternoon off, the weather was bright & sunny - perfect. The plan was to go straight to Kent & meet an SKCCer or two, then on to the Brands "taster session", but I'd received an e-mail saying Mark's car was off the road, so I thought I'd set off at 14:30, & trundle round the motorway instead. I sent him some Rickman info & almost straight away got an e-mail back, I was in the process of shutting the computer down & though it'd just be a "thanks" message, but then I thought I may as well read it anyway - the session at Brands was cancelled due to weather (I looked at the the bright sunshine flooding in through the window) WHAT?

I called Brands & apparently the circuit was shrouded in fog, so they didn't want a bunch of beginners going round - which is fair enough, but another 30 seconds & I'd have been on my way & mightily P'd off when I arrived!

Not to be denied a little "me time" I repaired to the garage & made some mods to the car in preparation for the trip to the Isle of Wight, now only two weeks away. I took the near side side pod off & adjusted the exhaust, made a flap seal for the hand brake slot as my wife had complained about the fumes when driving with the roof up, & removed the transmission tunnel belly plate to allow the engine bay to vent a little easier.

So, roll on the end of March.
Posted by BlatterBeast at 07:36 No comments:

I arrived at work today & looked at the SKCC forum to discover this excellent pice of work posted by one of the new members.

Posted by BlatterBeast at 08:29 No comments:

So, a big meal last night with my brother & his wife led to me wandering the house at 3:00am, then the realisation that with the dawn would come the first blat in a few weeks, made sure that sleep eluded me for some time, but when the alarm did go off at 06:10, it got no further than three bars of "Sweet Home Alabama" before my hand shot out like a striking cobra & hit the off button. 20 mins later I was ready to go, so I set off for the allotted meeting point just before the Spitfire Roundabout on the A31. I hadn't been going long when I realised the meet time was 08:00, not the 07:15 I'd get there by. So I waited & I waited, & after 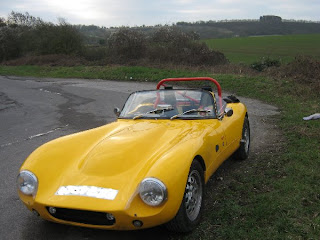 quite some time New Members Andy & Terry turned up, followed by the rest of the posse. We were off!
In spite of being at the head of the queue, I ended up second to last & we rumbled through the Hampshire countryside. We were doubly blessed, the roads were not only clear, but for the first time this year, dry! There were a few "issues with sat-nav interpretation, but nothing serious & after a quick refuel at a garage where the lady behind the counter said "is there something going on? a bunch of cars like that stopped in here a few minutes ago". We set off in pursuit.
A couple of miles after that we caught up at the top of Zigzag Hill, a wonderfully Alpine stretch of tarmac, which reached the summit all too quickly & there arrayed before us was the rest of today's crew. We parked up & discussed the day so far while looking at the view (& having a pee behind the bushes).
After a few minutes we mounted up & headed for breakfast at Compton Abbas airfield, where a group of parked up Lotii suggested that our idea wasn't very original. As usual, breakfast was good, the cafe was surprisingly busy for Sunday morning at an aerodrome miles from anywhere.
When we returned to our cars, I determined to swap groups & run with the big boys - this was potentially adventuresome as the least powerful car in this group was 1 1/2 times more powerful than mine, but keep up I did & we had a whale of a time passing through villages & twisty roads. Unfortunately I switched the GPS logger off when I thought I was switching it on, so I am unable to report how fast we were going - though I sure it was well withing the speed limit, naturally.
Then we entered the New Forest, which while beautiful & one of my very favourite places, it's not conducive to blatting as there's likely to be a "damn great 'orse" - or deer, cow, or pig stood in the road round any blind corner. So we soaked up the scenery with the sunshine that had now taken over the whole sky. We pottered into Bucklers Hard & had a refreshing drink overlooking the river. Until I noticed the time. I was going to be late home, so we mounted up again, & this time I led the small convoy (only four cars by now) out to the motorway - which was the last time i saw them, there was a bit of a melee of tin-tops behind me & the sevens were lost from sight. Oh well, what a glorious way to spend a Sunny Sunday.
Posted by BlatterBeast at 21:27 No comments: