Today we werr joined by the “other” SKCC the Scottish Kit Car Club. We’ve been meeting up with one or two of them for joint blatting over the last few years & their local knowledge has given us some excellent roads to sample.
So after breakfast 10 cars set out on a loop out to the west, returning to Selkirk. The roads were AMAZING, free of traffic & constantly winding, with mostly good surfaces & good scenery. Lunch (by which I mean cake / ice cream) was taken in a small café overlooking the Clyde estuary with Ailsa Craig in the distance (it’s an island, not a swimmer)


The throttle was holding together, though I was being careful not to go over about 50% or kick it too hard. 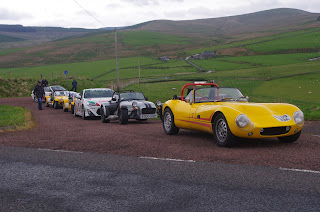 By this time we’d heard that two of our No. had returned to the hotel, Matt had split the sidewall of a tyre on a particularly vicious pot-hole & Linda had escorted him as he tried to repair the split with a puncture repair & then found somewhere with a tyre the right size. They did get out later for a mini blatt, so thier day wasn’t entirely lost. 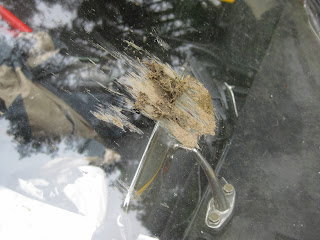 The thing I remember most about the afternoon, was a Cow Pat. I was following GB at a reasonably low speed when his car passed over something & some chunks were thrown up. I watched in increasing horror as the largest of these chunks – about the size of a jam doughnut - arced through the air towards my car, landing with a sound that can only be described as “SPLUG” on the screen about 6 inches from the top. Equally impressive was its consistency, any drier & it would’ve bounced off, any wetter & it would’ve been easy for the wipers to get rid of. 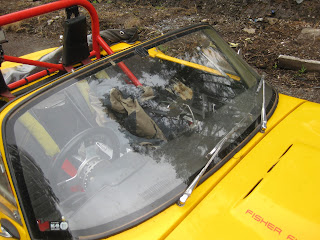 But this lump landed with just enough force to weld itself to the screen, but not enough to deform it such that it could be wiped away.
The other thing that stands out was some wonderful accidental choreography. We were making “good progress” along a timber road (a road for moving timber, not made from timber). There was nothing in sight ahead or behind – a good thing as the road was very single track. However, as the scenery opened up a little a very large, very laden timber lorry (a lorry for moving …… you guessed?) hoved into view. There would be no easy way round it, but just before the lead car reached it, it turned left & the lead car hardly had to slow down. It was worthy of Wallace & Grommit. 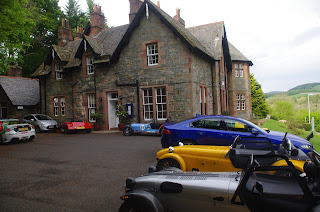 Tired from almost 300 miles of back-roads, the hotel – more specifically its bar – was a very welcome sight. A shower, a meal, some re-telling of stories of the day’s events & we were set up ready to do it all again tomorrow.
Posted by BlatterBeast at 21:45 No comments:

After a fitful night’s sleep caused by the attic room I’d been allocated being too hot & a bunch of shouting drunks shouting, we were informed that there would be a film crew from channel 4 making a spin-off programme from “gogglebox” filming while we ate breakfast. We did our best to take no notice. 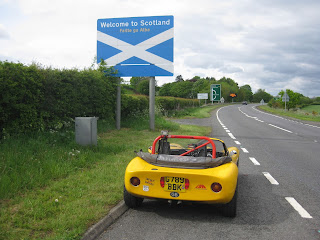 The weather was bright as we left town, but the inevitable traffic soon split us up & as is often the case, small groups formed & re-formed at fuel, rest & lunch stops. Lunch consisted of ice cream at a very secluded café in the grounds of a ruined castle – very pleasant. But I was on my own as I crossed the border. 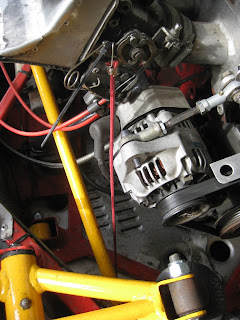 The throttle was still playing up. It was working but felt “notchy” at each stop I slightly re-bent the spring to make it better, but after a few miles, it would be worse again, until I was following a Golf who had wanted to play, but had either given up or decided he wanted to see more of my car, he waved me past & just like with the Audi yesterday I floored it & found the throttle stuck open – this time on a B-road. At the next junction I took a left & parked & watched while my compatriots turned right & drove off. 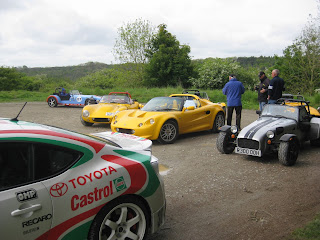 I managed to rig a workable something from the re-located pedal return spring & a bungee , & drove the last 25 miles very gingerly. 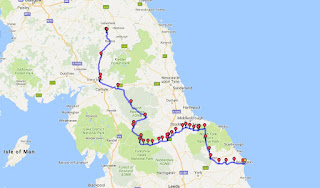 I arrived at the hotel & opened the bonnet. I opened the boot & rummaged for something springy. I thought I’d cracked it when the spring from a mole wrench fitted perfectly, but opening the throttle showed that for a spring, it wasn’t very springy. Back to the drawing board. The hotel owned said there was a Halfords in the next town & a cycle shop in Selkirk, so it looked like I was out of the following day’s blatting until I could find a suitable spring, but then Matt arrived & being a practical sort of bloke I thought he might carry a “box-of-useful-stuff” like I do. He did & unlike my box, his contained a couple of springs, one of which was a good fit, but not quite strong enough to return the throttle to idle, so it got backed up with a bungee & to my surprise it worked perfectly for the rest of the trip.


The Hotel was a good find, we had all but one of the rooms, so the bar was pretty much ours in the evening & with a good menu, food & service, we were rather well looked after.
Posted by BlatterBeast at 21:25 No comments: 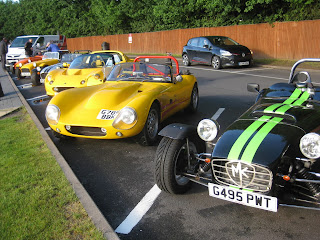 As usual with SKCC tours there were some “issues”, the menfolk met successfully at Lakeside, topped up the tanks & said hello, but one of our number had a problem, a digital dash with a mind of it’s own, he decided to err on the side of caution & take it home to fix, promising to catch us up later.


So we pulled out onto the M25 with me leading. There were four lanes & an Audi RS4? (all look alike to me) in lane 3 doing 65, I moved into lane four floored it, & felt something odd under my foot, I lifted my foot off the throttle, throttle stayed down – not good. I turned the engine off & back on (no Idea why), then off again & pulled across into the hard shoulder Radioing my compatriots to carry on.


A mile covered, two cars down. I opened the bonnet & found the throttle return spring snapped – fortunately at one end, so a little work with pliers saw it elongated & re-fitted. I tidied up, got back in the car & set off in pursuit.


But all was not well, the throttle seemed OK when driving but “notchy” at idle & the engine would vary idling speed at random. I caught up with the others & opened the bonnet again when we stopped for breakfast, the return spring was just catching a bolt head as it moved – easy fix.


After that we met up with our token female as arranged & made the lunch stop at lunch time.


The sky got darker & darker as we luncheoned & as we set off there were spots of rain in the air. It would probably come to nothing. What it in fact came to was a hail storm just as we reached the outskirts of town.


There were a couple of other downpours en-route, but as we passed over the Humber Bridge I lost sight of the cars behind me, arriving at the hotel a good ½ hour ahead of them.
So after a pint in the hotel & another couple over tea, I'm now very ready for my bed.
Posted by BlatterBeast at 22:01 No comments:

More On The Throttle Linkage 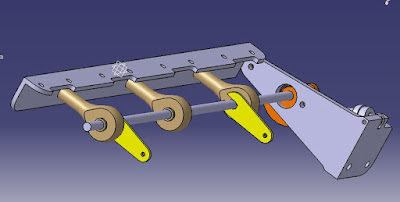 So here's the initial idea. The long angle replaces one on the TBs, it keeps them in line relative to one-another, but nothing more. The new one will do that, but will have three aircraft control rod ends / rose joints screwed to it. Through these runs a length of M6 studding, at a couple of locations this has a flat cut into it.
The yellow things mate with these flats much like a spanner so when the studding turns, they turn, the holes in the other end will have push rods (radio control car track control rods), two each, that will open the throttles. Using the track control rods means the action of each throttle will be individually adjustable.

At the back of the picture is a bracket which will bolt in place of the existing linkage bracket. The big hole will have a ball bearing for the studding to run in, a couple of pulleys, the mounting points for the twin cables & open & closed throttle stops & a return spring.

This is still all at an early stage of development, but it looks like it should work.
Posted by BlatterBeast at 21:38 No comments:

It's been a while since I posted on here, so what's been happening? Well, not much really. The oil pipe noted in the last post is working - there was a slight weep from the banjo bolt, but a little extra torque seem to have fixed that.

Last week the clutch pedal got very stiff & looking round the engine bay I noticed there was an inch of free play in the cable, I assumed the locking nuts had backed off, but no, they were still tight. Can't explain that, but While looking for a cause I realised the clutch pedal was bending the steel floor of the pedal box. Last year I fitted a brace to stop this, then over last winter in my wisdom I decided it was no longer required - I was wrong, so I had to make a new one & fit it. 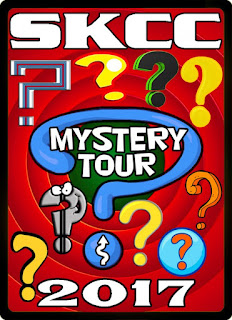 The big news though is that next Saturday is the start of the SKCCs "Rogue Runners" trip 2017 (Hurrah). This year's format is a little different as we'll be driving to the Scottish borders & staying in one hotel while going out on a number of loops, then heading into Wales & doing a loop there before returning to the south east.

This is what I'm "quite excited" about as the trips are always great fun.

But I have a dilemma, last year I had bold red "stripes" on the car (actually closer to Hot Rod "scallops") & in spite of the Ebay ad saying the vinyl I used was "guaranteed 7 year outdoor rated" a year later the are very definitely pink in spite of being in a garage for most of that time. I have a plan to re-produce them with paint, but not before next Saturday, so do I strip off the offending items, leaving the car bare? Maybe I'll see how much they upset me on the trip.

I've also started thinking about next winter's upgrades (every Spring I think the car's how I want it, by Summer I have other plans). This winter I'd like to make a "proper" throttle linkage. At the moment the Fury has the throttle linkage that came with the throttle bodies - straight off a Suzuki GSXR motorcycle - you would've thought that something like that couldn't be improved upon, but I guess to make is possible to fit a similar set up to one, two, three & four cylinder bikes, the TBs are all separate & each one drives the next from a linkage on No. 1.

This would work OK - though it's a git to adjust so all the butterflys open at the same time, but the Throttle Position Sensor (TPS) is attached to No. 4 - as far from the linkage as it's possible to get, so any backlash in the system really messes with the settings coming off idle.

So, my plan is to use radio control car parts to make a linkage that drives each TB individually & which will be fully adjustable, so they'll open together. Wish me luck!
Posted by BlatterBeast at 12:01 No comments: