Today was supposed to be the Fury's inaugural run out with the SKCC after it's enforced lay-up, but the British weather dealt it's cards & the outlook was not good. The run was moved to tomorrow, but sadly I can't go out to play. Instead I cut out & fitted the support beams in the driver's footwell. When I built the car there were horror stories about Furys failing the government SVA test because the bulkhead flexed when the brake pedal was pushed. I made a beam from sheet aluminium to back up the plain steel sheet & it passes muster with no comment at all. However my local MoT man has commented on the flexing a couple of times & I noticed when messing with the clutch that the bulkhead flexes even when I moved the brake pedal with my hand. Time to fix it properly. 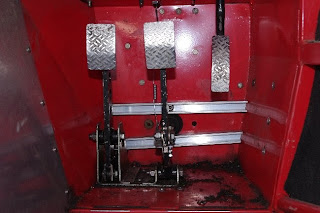 I'd ordered some alloy channel from Forward Metals through Ebay & it arrived from Birmingham in less than 24 hrs, post free, it looked awfully short, but after measuring & cutting it for the two beams, there was less than an inch spare. I took off the mastercylinder & the sheet metal beam off the outside & attached the two new beams to the inside with the master cylinder attachment bolts. Next time the engine's out I shall drill through the old beam attachment holes & pop rivet the new beams on, but that won't contribute anything to the strength.

Anyway, I put it back together & took it out & the brakes were much improved. Not in stopping the car, but they feel more positive - which is good.

Postscript - on the Costwold Curves run there were a couple of occasions when I floored the clutch & it stayed floored for a second or two, so there's a little adjustment needs doing.
Posted by BlatterBeast at 21:12 No comments:

Yes good people, I've been to Scotland. Mrs Blatter had never been to the Highlands, so we pointed the turbo diesel north & set off.

To break the journey we did a stop-over in Falkirk, which Mrs Blatter was expecting to be as pretty as Edinburgh - her only other experience of Scotland. We stayed in the salubrious surroundings of a Travelodge & were rewarded by being kept up half the night by a party of Northern Irish pipers shouting at each other. But there was a point to the Falkirk stop.
We went on this:- 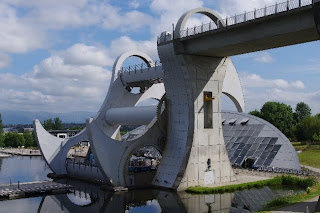 The Falkirk Wheel is a piece of modern engineering on a scale that would impress Victorians, if you look at the gondola nearest the water, that's a boat in there - floating. Its actually double the width of a narrow boat, so it's not a small item & as the arms rotate, the boat & all the water is lifted to the canal above - for the energy equivalent of boiling three kettles. Fantastic thing & at £8.50 for the boat trip including two goes on the wheel, something of  bargain. 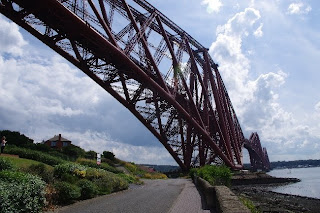 Following the ride on the wheel, we detoured east a little to see another impressive feat of engineering. In a former life I'd stood under the Forth Bridge a fair bit, as it was close to my first set of in-laws house, but it NEVER fails to impress, particularly when you hear a train & look up to see a tiny thing trundling through the trusses & you realise that this thing is REALLY big. There's a memorial at the side to the guys that died building it. Quite a few did. If you ever find yourself in southern Fife, I urge you to get down to North Queensferry & just stand under the bridge & marvel at it. F you look closely at the bottom of the nearest foot, you can see a whit smudge smaller than the diameter of the tubes - it's a portacabin.

Next we drove to Fort William where we'd rented a small bungalow / called Moidart Cottage. Mrs Blatter rented it for the view from the back.
This was it:- 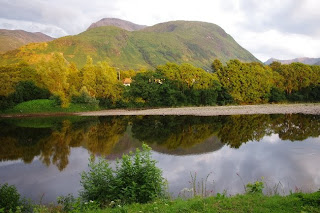 Stunning yes? The greyish hump to the left of centre is Ben Nevis (more of which later). You could lose hours just watching the light changing on the mountains. To top it off Oystercatchers would come & roost on the shingle bank opposite.

So what did we get up to? It was mostly mountains & waterfalls (being a particular favourite of Mrs Blatter) we did about 1000 miles getting there & back, with another 800 miles touring while we were there. 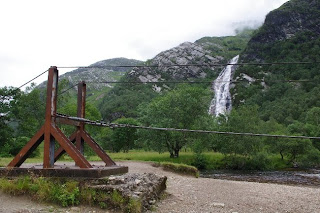 The next day we tromped off Up Glen Nevis (the glen at the foot of the mountain. The idea was to walk to the Steal Waterfall, which turned out to be a hard - but rewarding slog up a narrow gorge with a torrent cascading through it which suddenly became a high meadow between mountains with a lazy river & wildlife with no fear of people at all. Oh, and a truly magnificent waterfall all down the side of a mountain. We elected to not cross the river as this was what constituted a "bridge". Some girders & three lengths of steel hauser.

That was supposed to be a rest day after the journey, because the following day we took "the Jacobite" to Mallaig. 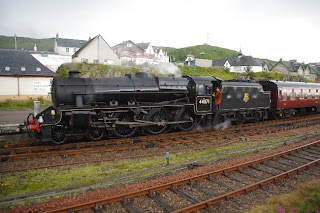 Also known (very unofficially) as "the Harry Potter Train" because it runs over the curved viaduct shown as Harry & Ron were trying not to fall out of the blue Anglia. The ride as a whole was spectacular, pulled by an old "Black Five" engine (they have three) the scenery was breath taking. So why were half the passengers - who'd paid £35 return - playing cards instead of looking out of the window? They all jumped up when we passed over the famous viaduct, but most ignored the stunning views of silver beaches, mountains, waterfalls, islands. 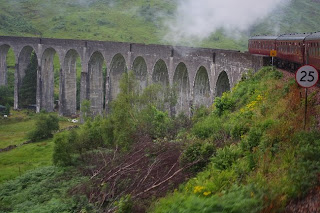 While in Mallaig we had a tea of spectacularly good fish & chips washed down with a heather beer - & we sheltered from the rain.

The next day was a wildlife boat trip south of Oban, so another long, but beautiful drive, ending on the island of Easdale. It really is only just an island, here the Atlantic Ocean is about 20 feet wide & there's an old stone bridge over it. Again I was perplexed, as a bloke walked up onto this fantastic old bridge over an Ocean to take a photo of his Mercedes off-roader in the car park. 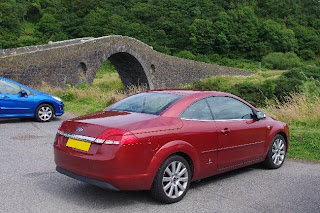 OK I'll admit to taking a photo of Mrs Blatters Focus CC, but at least I had the bridge in the background.

The trip itself was something of a disappointment from the wildlife point of view, we saw some porpoises & some awks, but mostly the wildlife wasn't coming out to play. Again fantastic scenery though, cruising round the inner Hebrides. Rum, Muck & the others.

Of course we couldn't not make an attempt on 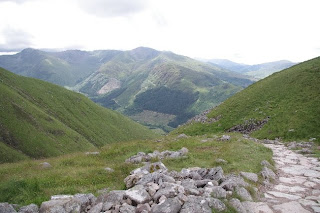 Ben Nevis. The plan was to walk a mile or so along the path & go home, but the views were so good we kept going & only turned round just below the clouds at 650m. as we got to the highest point we reached, a bunch came down the mountain carrying a sofa. This was part of a stunt for children-in-need, Mrs Blatter asked them how we could donate & I SO wanted them to say "just leave some coins down the back of the sofa" but they didn't. There was a website - BORING.

We were running short of days, but I had another big trip planned. I wanted to go to Skye. Don't know why, I just had always wanted to. We drove to Malaig & took the ferry to the Sleat peninsular, then north - west - south to Elgol, where there is a hamlet with a jetty, & a fantastic view of the Black Cuillin Mountains. 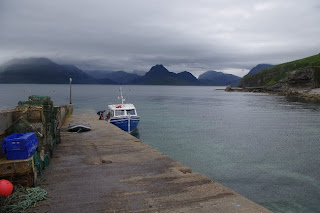 They were certainly brooding that day. We had another boat trip planned, just across the bay but on that short trip we saw Dolphins, seals, all the seabirds we'd seen on the wildlife trip & more, but we did get VERY rained on on the way back. I'd planned to drive from Elgol back over the Skye Bridge - another bridge over the Atlantic. But Mrs Blatter had other plans & wanted to see the "Fairy Pools", so north again, west again, south again, down a single track road to a place not marked on the map (she'd asked the lady in the harbour where they were) a small - & I MEAN small - sign at the side of the road 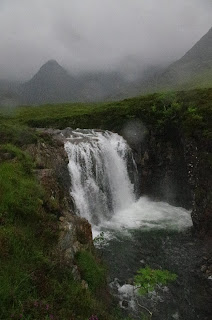 pointed the way & off we trouped. We were rewarded by what must be described as a flight of waterfalls, perhaps 15, each more fantastic than the last. We didn't get to the top, it started really raining, we got soaked - again. But mere photos can't convey the beauty of the place. We WILL be returning.

By this time it was rather late & we had 100 miles to go, so we sped though a range of mountains the we really should've taken our time over, but needs must. We stopped off for tea at a large inn festooned with tartan at the end of a glen & I thought this could be good, or very very bad. On a main road in the middle of nowhere they will not get much repeat custom & what there is will be trippers, so won't need to care much about the food. How wrong was I? That was probably the best meal we had & we didn't have a bad one anywhere in Scotland.

So that was about it really, we cruised with the roof down alongside Loch Ness - just because we felt we ought, then it was time to come home stopping off everytime a few gallons of water was seen tumbling off a ledge - which was often given the weather.

So yes it rained, yes we got wet - though I still got home with more of a tan than the elder daughter got in a week in Malia! - & the whole trip cost about £2000 for the three of us including food, fuel & the walking boots I had to buy there because I'd bought the wrong ones with me. But we all thoroughly enjoyed it which is the main thing. In a last desparate attemps to bring this back to the subject of cars, the Focus CC 2.0 turbo Diesel AVERAGED 49.1mpg either winding round lanes or cruising at 70 on the motorway. Quite impressed with that.
Posted by BlatterBeast at 14:12 No comments: