The Fury's been in three car shows in about a fortnight, the first to by invitation!

There was the Clandon Classic Car Show (in Aid of MacMillan) A baking hot day & I got bored by about 2:00 & left, but there were some interesting cars there including a very standard looking 109e Classic with a Rover V8 superbly engineered into it. Then there was "Wheels Day" at work (in aid of the teenage Cancer Trust) where I gave a very nice young woman a ride round the Research park, she was petite & fitted perfectly in the Fury & giggle appreciatively when I briefly floored it in second. Made an old man very ........ ratty that he's quite so old.

The third show was the "Summer Action Festival" at Castle Coombe race track, the Fury has only been on a race track once, for some slow parade laps at Brands Hatch - & then we were taken off after only two laps when a guy lost the back of his MkII Escort, so this was to be mine & the Fury's first foray.

I arrived way too early, went & got some petrol & when I went back Crunchie had arrived & had made a new friend - a guy who was hard put to believe the Ultima's engine was 7 litres, then enquired if it was a diesel & finally told us that a while ago - some time ago - maybe last year, he'd seen a Ferrari (spoken in hushed tones as if he was describing seeing a dragon). So, in for breakfast & await the others, the breakfast was good, the café was VERY Irishwith green painted walls & Gaelic proverbs, Guinness posters Leprechauns etc. Strangely the music was mid 50's pop & rock, not the "diddly-diddly" music I would've expected from the décor.

Arriving at the track, Crunchie & I parked on an empty stand next to some other kits. When Neil arrive he commented that we were on the wrong stand & after a short investigation I ascertained that we were, in fact, on the Caterham club stand. We decided that was OK & re-arranged some signs to make it look like we were in the right place.

I took the Fury down for a sound check & was told that it had "just passed" which I took to mean it had just failed but they weren't going to make an issue of it, back to the stand only to realise time was short for my track session, so off to the driver's briefing & dash about to get the car into the queue - where we sat for 40 minutes wondering how they had got so late when they'd only been running for 1 3/4 hours. Perhaps the time slots were organised by a team of doctors?

The track session was OK, quite slippery, but there were only a couple of opposite lock moments, the R888Rs coping admirably & I did get up to 90 at least once (only looked at the speedo once). However, on looking at the video when I got home, it shows me in the wrong bit of the track, in the wrong gear most of the time I like 100es - generally I like them more subtle than this one which was a drift car. Posted by BlatterBeast at 18:42 No comments:

An Evening In The Meon Valley 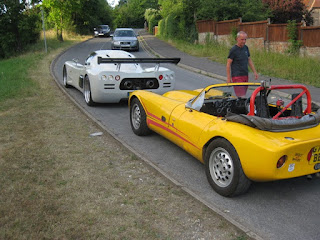 A call went out on the SKCC forum - there was to be an evening blatt, so having got the route I took the long way round to the Shepard & Flock roundabout where Crunchie was already waiting, his newly returned Ultima sitting at the kerbside ticking as it cooled. After a chat the other two in our party turned up & we set off. Luckily I was at the back as my satnav immediately told me to go the wrong way. I ignored it & followed the light-aircraft-grey Ultima. 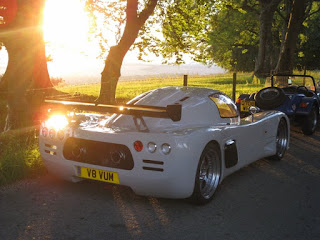 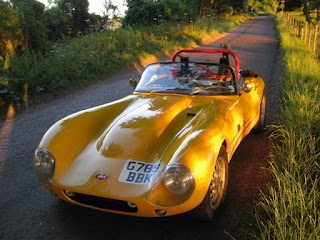 There was a fair bit of traffic about & it was mostly dawdling, but occasional gaps gave the opportunity to open the car's up a bit. We stopped on a country lane high on a ridge with the sun setting - it was a beautiful spot, but soon enough we were zipped up & back in the cars. there wasn't far to the Pub-With-No-Name (it's called the White Horse) but there was no traffic as we swept through the villages & countryside, the Ultima in these settings looks like it's just arrived from another planet & locals were looking at it bemusedly as it rumbled past.

Then some bikes came from the other direction & in the middle of them was a red Ultima, guess who'd just turned the camera off & thus missed the chance to have a photo of the back of one in focus, with the front of the other blurred - RATS.

We pulled up in the pub car park & went it. I was last in this pub 30 years ago, it seems to have quietened down a little, though maybe that's just because it was a Wednesday. I said to Crunchie that the Ultima sounded really good, when we were accelerating hard I could hear the high pitched whine even over my own car - he said "I wasn't accelerating hard" - Ah. 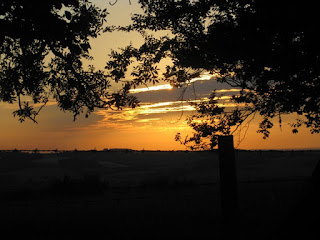 Posted by BlatterBeast at 17:21 No comments: 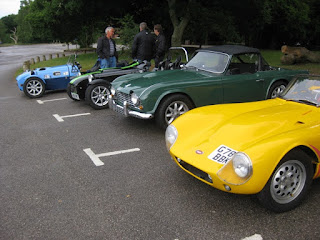 Not a huge amount to report, today I went on an SKCC run from Newlands Corner to a pub called "The Bull" near my Dad. They are trying to establish a "breakfast club" type event, so there were a bunch of Hot Rods & yanks from the "Blood sweat & gears" group, four kit cars & a TR4. As the TR4 was being driven by Matt's Dad, the pace was more relaxed than can be the case. The route was pretty good, considering we traversed the South East of England, there was little traffic & plenty of thatched cottages. If it wasn't for the pot-holes I would've thought we were in Devon. Well, the pot holes & the hoards of Lycra Louts cycling four wide & getting in the way. But the pub was good & the car park looked like this:- 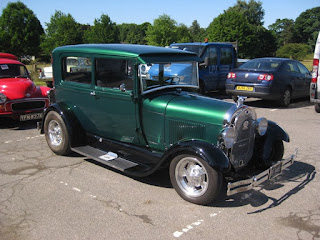 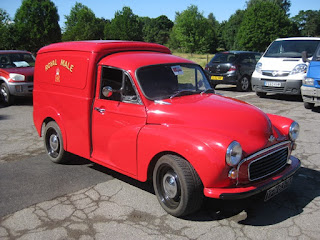 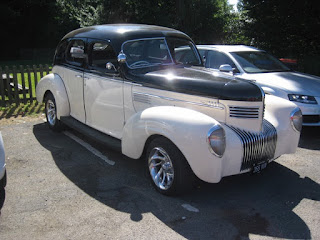 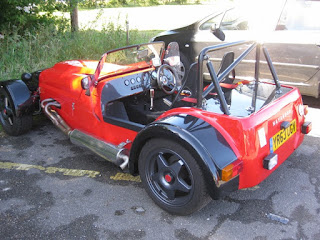 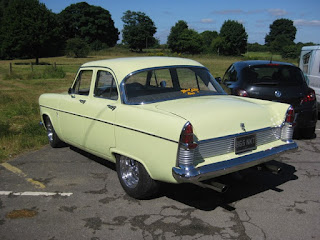 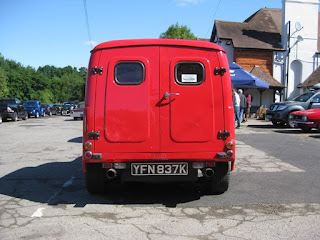 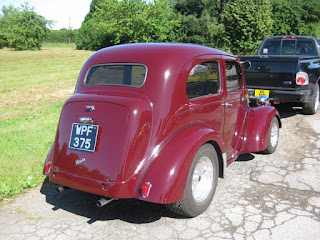 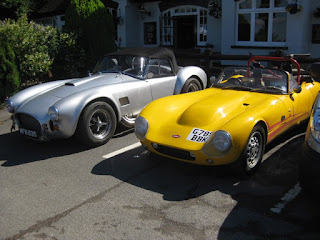 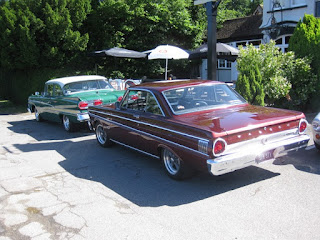 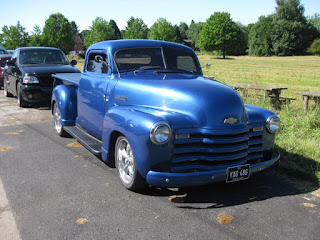 Having some time to spare when I got back, I decided to tackle the high idle. The car idles fine when it’s cold, but at about 1200RPM when it’s hot. I’d faffed with things a couple of time with no success & had tried to balance the throttle bodies only the other day, but found that No4 was screwed right in. Thinking about this, I wondered if the wildly over-complex throttle linkage was holding No.4 butterfly slightly open, making the idle screw redundant & meaning there was too much air getting into the engine when all the screws were adjusted to balance No.4. This did indeed seem to be the case, but the engine was still running too fast. Doing a similar adjustment to No.3 made all 4 idle screws effective & had the engine idling nicely at about 900RPM. When I make the new throttle linkage, all this faffing will be a thing of the past – Hurrah!

Posted by BlatterBeast at 17:50 No comments: