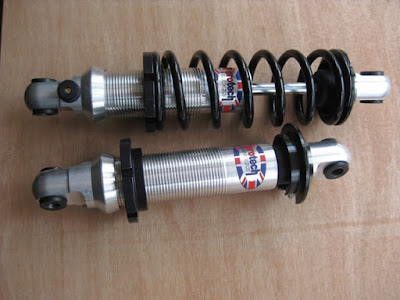 Yes, the new shocks have arrived in all their aluminium shininess. So hopefully on Saturday the old steel spaxs will be coming off & these will be going in their place. The front springs will get transferred onto the new shocks, but there are a pair of slightly stiffer (150lb vs 130lb) springs to go on the back & hopefully keep the car off its' bump stops. 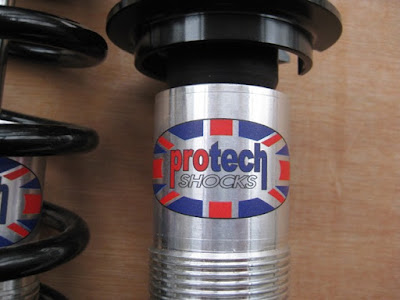 Posted by BlatterBeast at 16:46 No comments:

Well I think a corner has been turned. I've taken the Fury to work each day since the snow (yes, even in -3C) & so far nothing's gone pop. In fact, since I did some fettling last weekend it's all settled in nicely. But I'm getting ahead of myself.

I'd had all sorts of problems with the brakes. They'd got air into the master cylinder when I fitted the new reservoir & I thought the air had scuttled off to the back where the brakes were new & the slave cylinders were dry. There was a further problem in that the brakes on the Fury are fitted 90deg to how they were fitted in the Sierra, so instead of the bleed nipples being at the top, they are at the side, so any air is trapped between the upper piston & the nipple.

So I started bleeding the front callipers - this was laborious as NONE of my family were available to push the pedal. Tiny tiny bubbles were coming out, as if I'd filled it with prosecco. But slowly slowly the pedal came up to the top & is now, not perfect, but good enough to drive.

The throttle has been a revelation, originally it was "geared" 1:1 off the throttle, but this resulted in the car being very sensitive & jerky in traffic, meaning I had to slip the clutch & coast at anything below 30. With the non-linear linkage, the first 10% of pedal movement open the butterflies 5%, so bimbling along is now easy & smooth.

Similarly the clutch, in spite of what I've said above about having to use it a lot in traffic, was HEAVY to the point of hurting my foot. The new linkage was much lighter - much MUCH lighter. I took the car round to Sainsburys to fill the tank & found I had to push the pedal right to the bulkhead to change gear - this would not make for speedy changes. On the way back I seemed to have to push it as far as it would go & the gears still clunked - the cable was slipping - Eeek.

I got home OK & set about taking the pedal out & moving the pull rod to the bottom hole in the pedal (meaning I had to cut a little more bulkhead away). Then found the clamp bolt on the cable wasn't tight. Had I not tightened it, or had small movements in the cable loosened it off? I fitted a wire locking lug & fitted two nuts to the clamp, the top one of which is wirelocked back to the lug. The next time I took it out the clutch operated over 50% of the pedal travel & has a little more "heft" to it (which is a good thing) & the cable seems to have stayed put.

The car was still hesitating coming off idle though, I noticed that as the throttle opened, No.4 lagged a little (No. 4 drives the Throttle Position Sensor). I took off the airbox & adjusted the link for No. 4 & it's all much improved. So I'm a happy bunny.

..........while fitting the rear brakes I'd noticed the rear shocks needed replaced, so in a day or two, four shiny new ProTech aluminium shocks will arrive with slightly uprated springs for the back, then there's a geometry check & corner weighting session at Boss Racing & THEN I'm ready for the road trip. 😂😂😂😃
Posted by BlatterBeast at 21:28 No comments: 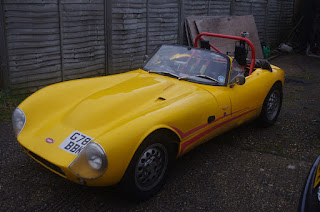 This evening I taxed the Fury & took it down the road to get some fresh fuel. The throttle feels really good, progressive & smooth, the clutch is also much lighter & more progressive, but to fully disengage it needs to be pushed right to the bulkhead, so when I get some time, I'll move the pull-rod to the outermost hole in the pedal, which will add weight & reduce travel. 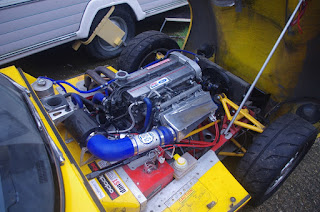 But the main difficulty is the brakes, the pedal has way too much travel, but the handbrake has hardly any at all, so it's not just out of adjustment. I need to get someone helping me bleed them.

Posted by BlatterBeast at 20:29 No comments: