Let me tell you about my FIFTH kit car.

A very clever man called Jeremy Phillips designed a series of kits, the Striker was (I think) the third, then the Striker chassis got wrapped in a beautiful 1950s looking shell & named Phoenix. But people wanted more practicality, so a full screen & doors were added along with a 1960s styling update & the Fury was born. I built one, there's details elsewhere. But people wanted yet more practicality, so the Fury got an early 70s styling update, bigger doors, a one piece shell & a boot - that's the Stylus. Way back last century a colleague called Chris Chapman (you'll see him mentioned a few times), built a Stylus & his experiences influenced me to build a Jeremy Phillips car. There are some words elsewhere about my life in 2019 - not a good year & one of the worst things to happen was I crashed the Fury - propely. Broke my heart.

Time moves on & by 2021 I once again had a house with a garage, a little money & a desire to build another car. It needed to not be a Se7en, it needed to be cheaper than a Cobra - so that was 90% of the current kit car market out - I needed a windscreen & roof for touring - so that excluded the other 10%. I decided that buying second hand was the only real option & a Stylus came up for sale at about the right time.

It was originally very well built indeed, it needed to be with 250bhp of supercharged Zetec, but somewhere along the way the supercharger had been removed, leaving the car with a beefed up gearbox, limited slip differential & huge brakes, but a much more manageable 160bhp (ish - no idea really). It's a little shabby having done next to no miles over the last few years & my plan was to give it a light refresh & get it back out on the road.

However, the more I looked, the more I wanted to improve & when the dash came out to reveal something of a bird's nest of wiring, I decided drastic action was required. A LOT of money had been spent on the car in 2017 & tastes vary, I didn't like the blue anodised billet alloy parts - they're heavy & way over-engineered, so they came off, there were other parts that would have been wise on a supercharged car, but didn't make sense now it wasn't, like an oil stat, remote filter & 12 row oil cooler. Needless to say the 20mm "Carlos Fandango" wheel spacers found themselves on the for sale list as well.

Then on the car's first blatt, a badly fitter radiator sprung a leak, but the temperature sensor was in the water rail, not the engine so the gauge never showed an over-heat & I carried on driving. A new engine was required.

If the engine was out it was surely worth doing the work I had planned for the following winter, so the chassis & suspension got re-furbed, the fuel system got reconfigured & all those little jobs in the back of my mind got ticked off.

So the interior had the 20 year-old flocking scraped off & replaced with some cream vinyl (not a brilliant job, but I'll get round to improving it), the seats were upholstered, the engine was swapped for a 65,000 mile black top with the light flywheel, sump, cam cover & water rail moved across (with the blue paint removed), new silver & orange 13 x 5.5" wheels replaced the all black 15 x 7s it came with, requiring a brake shrink - a retrograde step some might think, but the master cylinder had never been changed to match the big brakes, so they didn't work well anyway. After all this work I am feeling that the car is now truly mine & so far has proved itself up to the adventures I have planned for it. 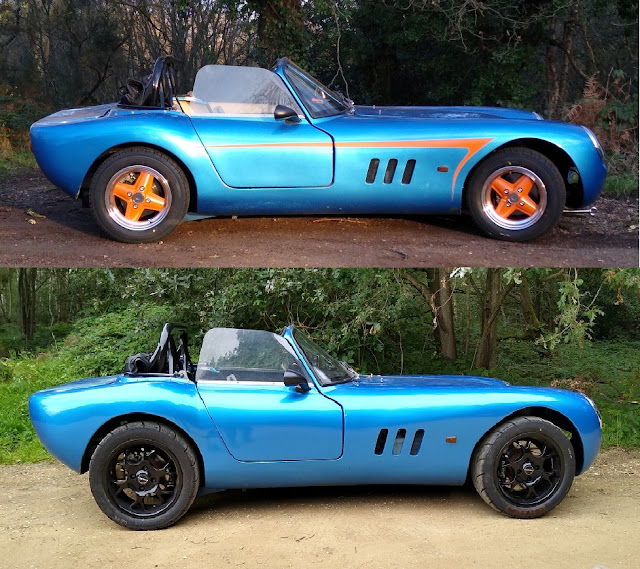