Bezel Is A Good Word

Today I took the driver’s side pod off & mended the screenwash – it was just a blocked valve, Then I thought I’d clean off the peeling powder coat & repaint it with red hammerite, this meant taking the screenwash tank off – no problem & I did the painting, put the tank back on, then the side pod, THEN thought to test the screenwash. It wasn’t working – I’d forgotten to put the earth back on one of the mounting bolts (sigh). 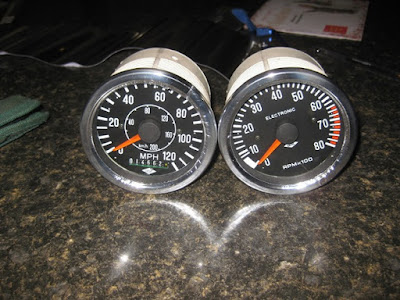 So, pod back off, cut the wire-locking, fit the earth, re-wire-lock the bolt, put the pod back on. I then took it round to Sainsburys to fill the tank. On the way home both the speedo AND the tacho stopped working. On getting home I took the dash out & found the earth had separated in a connector (bad day for earths obviously), but while the dash was out I removed the clocks & attempted to chrome wrap the rims. It is NOT as easy as it looks on the TV, however after many many failed attempts where the wrap just wrinkled up or tore, I did achieve this >>>
It’s nowhere near as good as it looks in the photo & the small clocks will need to be a great deal better (they're not shaded by the dashboard "peak"), but I am learning.
Posted by BlatterBeast at 18:53 No comments: 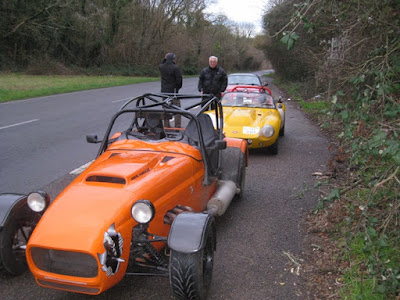 Last Sunday saw the first run of the year & while it was good to be out, it wasn’t without its’ problems. The speedo wasn’t working, the screenwash wasn’t working & while the new coms gear worked well with crystal clear sound, the Press-To-Transmit button would stick down until the radio’s voice said “Transmit Overtime”. This was an irritation to those around me as they could hear what was going on in my car. 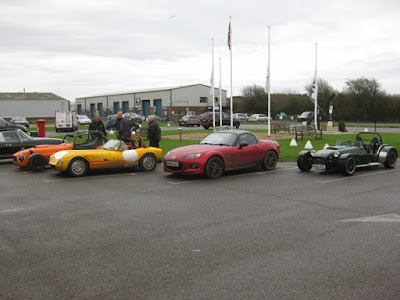 Of more concern to me was the screenwash, at this time of year the roads are filthy & the screen was getting covered in cack, from time to time the car in front would go through a puddle & I'd get a few wipes in. This evening I’ve sorted the PTT button by cutting the rather cheap old one off & attaching the nicer one from the old headset, it was a fiddly job as the wires are TINY, but it's back together & working, so fingers crossed & tomorrow I'll look at either the speedo or the screenwash, probably the speedo as it's forecast to Pi55 down all afternoon.

But back at the run, breakfast was served at Shoreham Airport, a very art deco building, packed with folk taking breakfast, but no planes flying. I'll come here again, it must be a great place to have breakfast when the sun's out.

Posted by BlatterBeast at 18:29 No comments:

On the first I raced home from a friend's where I'd spent new year's eve, taxed the Fury & headed off to Brooklands for the new year's day meet. After about 2 miles the car stopped & refused to start. I took out the fuel cap & there was a rush of air - AHA! the tank vent valve isn't venting. I took the locking insert out of the filler & after a while it fired & off I went again.

Brooklands was mobbed with a two mile tailback waiting to get in - a wonderfully interesting tailback I'll grant you, but I decided to turn & try to find a way round it, then the engine stopped & refused to re-start. I wobbled the wire on the fuel pump & it came away in my hand. Thinking I now had two faults I called the RAC & got a tow home.

I cleared the vent valve & moved it to a place that was easier to get to in future & found the connector that had separated & replaced it with a soldered joint. I also took out the wire providing power to the rear USB sockets & replaced all that with a wire from the transmission tunnel.

After a day or so I went to fill it with fuel ready for a Sunday run with the SKCC. I wouldn't start.

The engine was getting fuel as I took out No.1 sparkplug & it was wet, so electric then, I took the connector off the coil pack, no sign of 12v, I turned the ignition off & on again & the circuit tester lit up, there was a click & it went off.

After a lot of searching & testing I eventually found that the ECU allows the fuel pump to run for 2 sec to prime the system, then shuts it down to save power for cranking, then on again when the engine is running. It does this by switching the earth to the fuel pump relay. My car doesn't have a fuel pump relay & for some reason I'd wired the live feed to the coil pack this way instead. With the fuel having been in the tank all winter it had "gone off" & it was taking longer that two seconds to start, so the coil pack shut down. On the odd occasion when it did fire, the ECU turned the coil pack back on again & it ran just fine.

Bizarre - but it's been like that for SIX years

While it was in bits for me to do all this I also added a new indicator buzzer & a new connector just for the centre portion of the dash & taken out an unused relay, so I've got a few improvements from the fault finding.
Posted by BlatterBeast at 20:28 No comments: