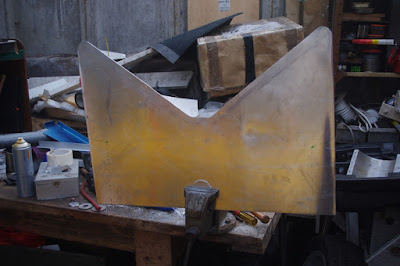 After a very nice break in the New Forest with Mrs Blatter, my plan today was to get the Coanda panel which leads into the main flat panels. The theory behind it is that air from the lower half of the radiator is sent under the car, where (hopefully) the Coanda effect will result in that air being dragged through by the airflow under the car, which will in turn drag more air through the radiator - we'll see. 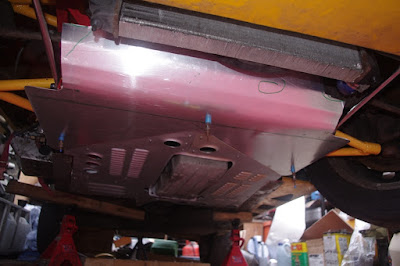 It was already shaped when I started, but needed brackets & lightening holes – sounds simple, but it still took all day. It still needs the chassis brackets riveted on (ran out of sealed rivets), the anchor nuts fitted, & a coat of paint.

But it's done - the car has the flat floor I've always wanted. 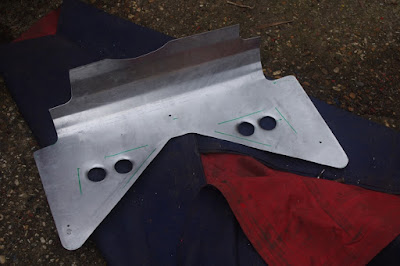 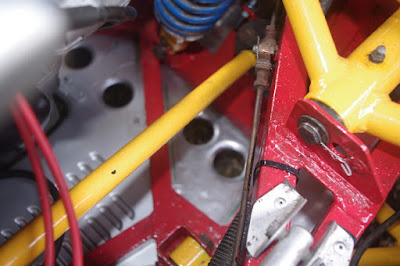 Posted by BlatterBeast at 18:15 No comments: 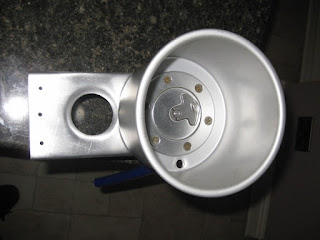 Still with the sheet metal work this PM I've finished off the filler support / splash bowl (except for trimming the splash bowl to fit the boot lid). It's gained a small bracket holding a stainless pipe in a grommet, the pipe aligns with a belled down hole in the splash bowl, so any rain or splashed fuel will pass down the hose & get dumped overboard. In the first pic you can see the bowl drain at the 6 o'clock position, in the second you can see the drain hose. 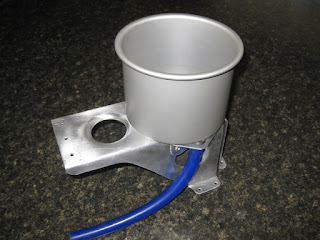 Posted by BlatterBeast at 15:19 No comments: 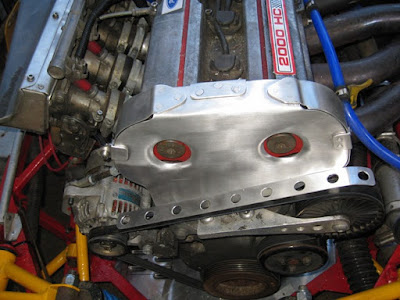 This morning I finished off the cam belt cover. It gained a couple of flanged lightening holes, a finger guard for the alternator belt & a rub over with Scotchbright.

I need to make another small guard on the inlet side of the engine, but that can wait until the weather improves & I can get round that side of the car.

The quality would make a tinsmith cry, but it was designed & made in my garage with nothing more than a vice & hand tools, so while it could be better, I'm actually very pleased with it as it is.
Posted by BlatterBeast at 16:19 No comments:

The fuel filler support is just about done, so I thought I write down how I done it.

First I drew it on the computer to see what looked right, then I printed out two paper copies of the flat pattern, one to fold up & put in the car as a last check & one to make to.

The paper pattern fitted OK, it just needed a little more on the ends of the flanges, so having adjusted the "make to" copy with a crayon I selotaped it to the aluminium sheet & drew round the edge with a magic marker (disappointingly they're not actually magic - it's just a fat felt tip!).

To cut it out I used a jig saw with a very fine toothed blade, this can be a bit worrying - I still have no feeling in my left index fingertip after the jigsaw jumped & stabbed it a couple of times. Cleaning the cut edges with coarse & fine files stopped any further bloodshed & at this stage it looked like this:- 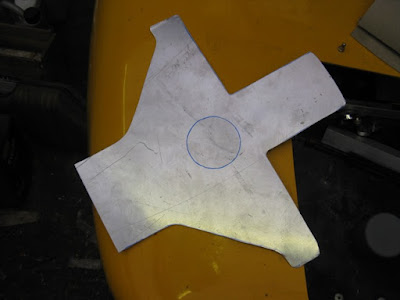 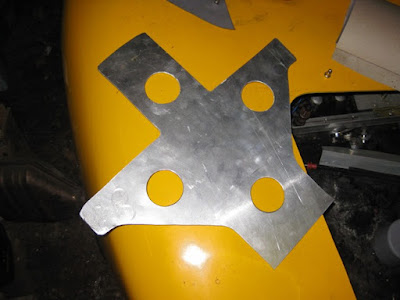 So out with the hole saw & my bracket looked like this:-

At this point I made a bit of a mistake because I got all enthusiastic & flanged the holes, which made bending the side walls down a bit of a git - but I digress. 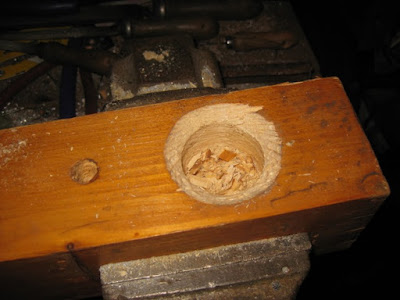 At work I'd noticed that the really big sockets had a curved "neck" - just the right shape for pushing a lightening hole, I used the hole saw to put a hole the same size as my lightening holes in a lump of soft wood, then chiselled the edge away to make a sort of "bell-mouth", it wasn't pretty, but it was very soft pine from some cheap furniture, so it would deform nicely.


So I placed the sheet over it & clamped it down, placed the socket in the hole & whacked it several times with a mallet. 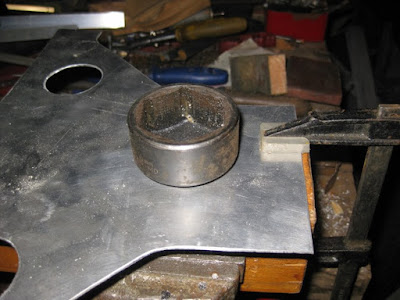 Here's the male tool in place, about to get whacked with a mallet (note:- NOT a hammer - a mallet). 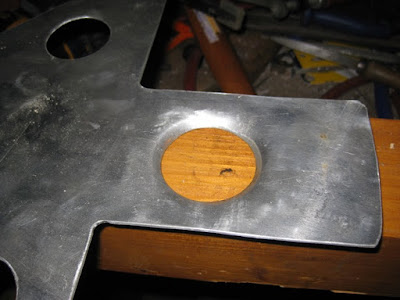 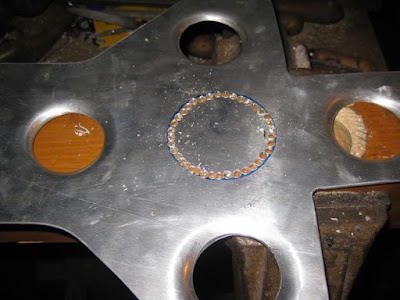 Next job was chain drilling the hole for the filler - really not one of my favourite jobs, but not too bad in aluminium as it's soft enough to cut pretty easily. 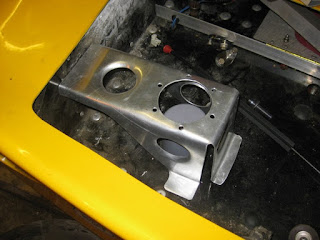 Then I bent up the sides & tried it in the car. I think it'll be OK when it's riveted down. It needs a loose angle to attach it to the boot side wall, & a drain made up to stop it filling with water & I'll trim the bowl to height when the boot lid's fitted, but so far, quite pleased with it - 2 1/2 hours well spent 😊. 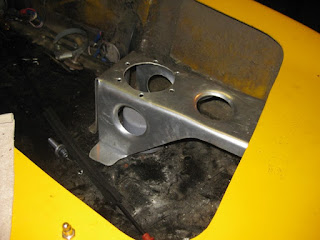 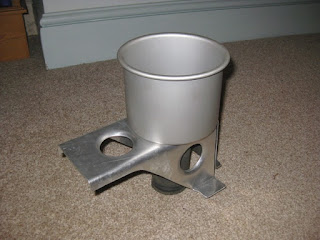 The only things left to do were clean up the filler hole, drill the holes it bolts to (which will also attach the bowl to the bracket) & see how it looked. Quite '50s techie I think - which is good 'cos that's how I wanted it to look.

Posted by BlatterBeast at 19:29 No comments:

More On That Cake tin 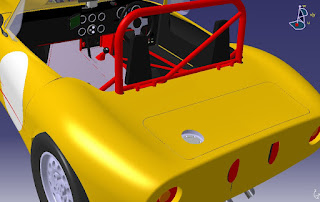 I've been doing some drawing, & here's what the cake tin mentioned yesterday will become.

Having cut the boot lid out, there's nothing to support the fuel filler, so I designed a bracket to hold the filler just below the boot lid surface, but that would let the rain in yes? well the cake tin will become a "splash bowl" around the filler & will have a drain to the outside under the car somewhere. Like this:- 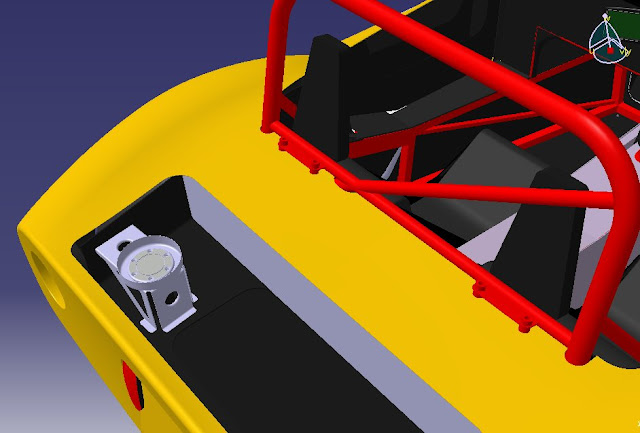 Posted by BlatterBeast at 21:14 No comments: