Red Is The New Pink

Some time ago I came up with the idea of decorating the car with 1950s scallops & bought some "guaranteed 7 year non-fade vinyl", made up the scallops & applied them. They looked good & faded to Barbie pink in 18months almost entirely in the garage. 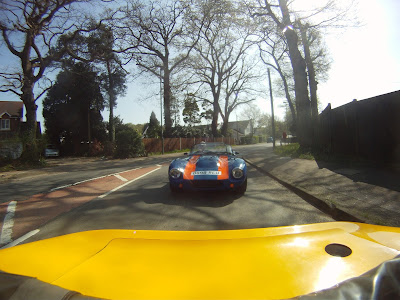 So last Friday I masked around the scallops (& added a third line at the top), peeled the vinyl off, roughed up the surface a little & sprayed new red stripes, the following morning I was admiring my handiwork when Neil arrived with his blue Fury. We went out for a short blatt, but I chose a route poorly & we suffered from traffic. Then I realised I wouldn't get home in time to give the younger daughter the lift to work I'd promised her, so it all got a little fraught. I'd intended taking pictures of the two Furys together, but there just wasn't time so this GoPro grab is as good as it gets. 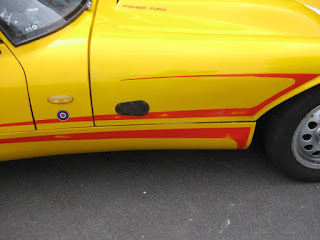 The following day I took some wet & dry to the red paint - the "style" of the car is "early '60s club racer found in a barn & bought back into use" so I've distressed the scallops to look like they've been polished for years & years. There's some age appropriate decals in the post to set it off too.

Also this week I started fitting the new shocks. FSC had told me they fit 12 1/2" to the back & 12" to the front, so that's what I ordered. I had my doubts so I put the 12" ones on the back & they bottomed over speed humps unless the back of the car was raised like a late '70s Cortina. Fortunately the VERY nice man at ProTech has offered to swap the 12 1/2" shocks I ordered for 11 1/2" ones. When they arrive I'll swap the ones on the back onto the front & fit the new shorter ones on the back. Then I'll have some shock travel & the ride height I want. It is already noticeably better with the ProTechs on the back, so hopefully there's more improvement to come.
Posted by BlatterBeast at 17:24 No comments: 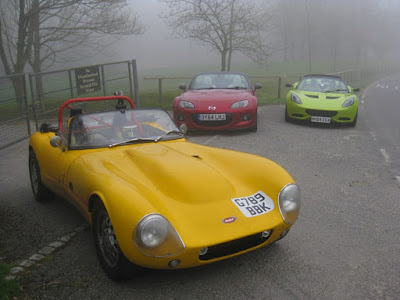 First club run of the year, not the first run for the car, but the first “high performance” run, but before that the speedo had stopped working, I took the dash out & found a broken wire – easy fix, I put the dash back in but couldn’t test is as there was a car on the drive. So on the day of the run I set off in the misty early morning to find the speedo still wasn’t working & neither were the rear fogs or the screen heater. But I enjoyed the run & the car is now significantly better to drive than it was last year from a pedal point of view.


There were also lots & lots of interesting cars about I was particularly taken with these two.... 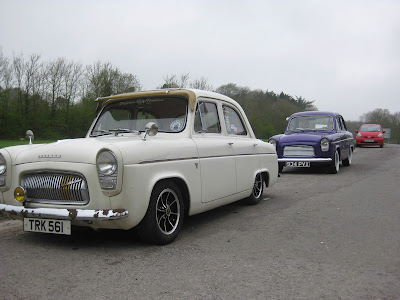 After breakfast I drove further east to my son's house where we put the last of his house's electrical gremlins to bed. This also presented the opportunity to take him out in the car for the first time. I think he was a little shocked by the difference to his wife's Hyundi I10.

Then when we were finishing off, his wife said "it looks like it's raining" so it was a wet drive home with the roof up.

This evening I've taken out the dash & mended the speedo & the switches, I also found out why the radio wasn't working yesterday - the volume was turned right down - DOH!
Posted by BlatterBeast at 19:38 No comments: