Another gap has formed in the writing – for which I humbly apologise. There are a number of reasons, firstly I’ve done very little to the car – because it needs very little doing (this is a good thing), also I’ve been to Iceland for a week – which was fantastic.


Iceland is a surprising place, it’s the size of England & Wales put together, but while we have about 55million people, 10million of whom live in the capital, Iceland is home to 1/3 of a million people, 120,000 of whom live in the capital. The people are very friendly & all speak very good English, which is nice because my Icelandic is a little rusty. The English speaking was put into sharp relief home when after a week in Iceland having no difficulty at all understanding any Icelander we came across, Mrs Blatter completely failed to understand the waitress in the coffee shop at Gatwick airport. Hmmm.


Iceland has the biggest waterfall & the biggest desert in Europe & is perched on the rift between the American & Eurasian tectonic plates, which is why the whole country is powered by steam. We saw waterfalls, walked on a glacier, watched geysers, made snow angels on a black beach, swam in a hot open air pool in a snow & hail storm & saw the northern lights. Not your usual kind of holiday then.


On the car front, I’ve purchased a cam cover from a Silvertop Zetec, these are made of alloy rather than the plastic one the engine came with, so I’ll be attempting to polish it to make the engine bay look more “period”. Of course if (when) I get bored I’ll buy some red crinkle paint & do it with that. If all goes well, I’ll need to mess with the cam pulley cover. It touches the inside of the bonnet & is quite a bit bigger than it needs to be, so I might model it up & see what can be done.


I also need to re-attach the rear valence after I broke off one of the fixings last time I took it off. I’ll probably move the GoPro mic from the passenger door shut to the back as well otherwise Mrs Blatter’s screaming will drown out the engine noise.


BUT, the big news (relax- it’s not that big) is that the date & location for the 2015 Rallye des Jonquilles has been published & my form has gone in, so with a little luck Mrs Blatter & I will be going on that on April 12th. I have a certain amount of “dressing up” to do (on the car) before then – there’s some stickerage to put on to emphasise the ‘50s styling on the car. But for now I’m saying nothing more on that.
Posted by BlatterBeast at 21:38 No comments: 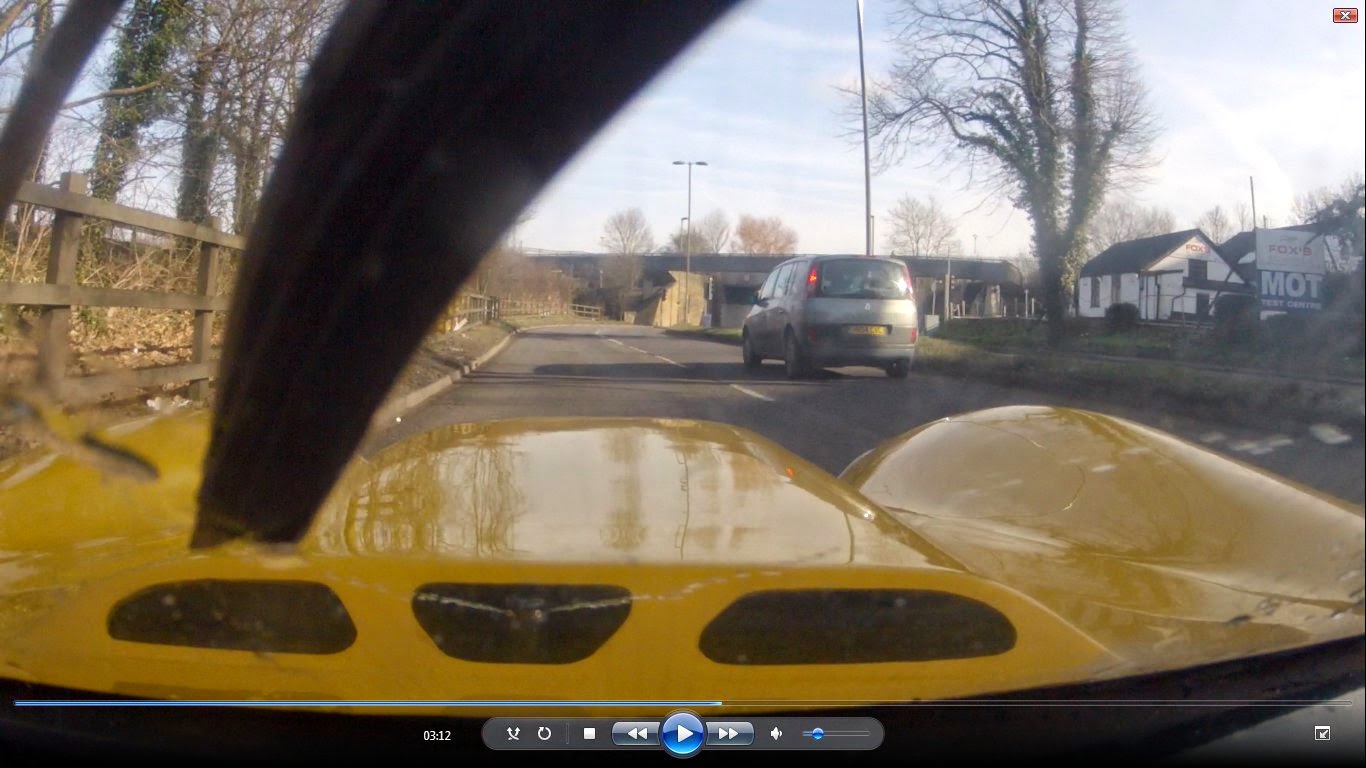 I've just come back from a test run in the Fury & I can report that it all works - well, everything I've been messing with recently. The image in the right is the view from the new 3D printed GoPro mount , showing the windscreen washers during what could be called "the money shot" & as you can see they hit the screen 1/2 way up - perfect (the big black thing is the wiper blade). Also, the view in the rear view mirror is much improved & when I topped it up with fuel, the gauge went to the "F" rather that 3/4 of the way there, so that also was a good thing. I know I have a gallon left when it hits empty, so I should have a gauge I can rely on. Just the speedo & the oil pressure gauges to sort out now.
And there are signs of spring in the air!

Posted by BlatterBeast at 13:33 No comments:

Plinth - What A Good Word


As Cinderella might have said if she had a speech impediment "my plinth has come".

Fitting it was a faff as I had to lift the dash top & get my fingers  squished between the dash & the top cover, but in the end it's fitted & it seems to work. I can't be sure until I take it out on the road, but it looks like I can see over the folded soft-top on the back of the car


Then I put the dash back together, & trial fitted the GoPro (yes I know I don't need any more places to fit it) & Bob is your uncle.

Some Day My Prints Will Come

I was approached this morning by a man holding a piece of black plastic in the shape of my centre mirror plinth / GoPro mount fresh off the 3D printer – and I saw that it was good.


The finish around the GoPro “fingers” is a bit “steppy” due to the limitations of the process for reproducing radii, but the (empty) GoPro case I’d taken to work slid into it snugly and the nut fitted in the hex socket and the bolt fitted and when tightened it gripped the GoPro case without snapping off the fingers – Success!


If it’s not below freezing when I get home (frankly unlikely) I’ll see if I can fit it to the dash top, though I’m unlikely to have the right size bolts.
Posted by BlatterBeast at 19:57 No comments: