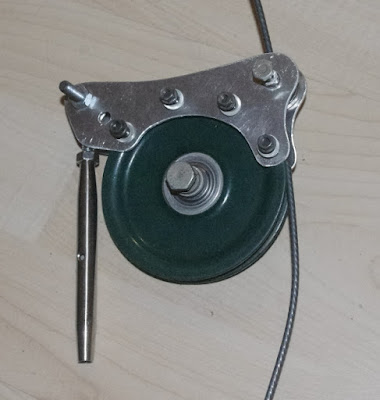 Today I finally got some half decent garage time & made up the pulley / lever. Seems to work quite well with 2mm aluminium plates bolted on either side of the pulley with a rod end one side of the lever & a "nipple clamp" made from an M8 bolt the other ("nipple clamp" because it clamps the cable & acts as a cable nipple at the same time).

I am a little concerned about the bearing strength of the 2mm aluminium, but it's all bolted together, so easy enough to re-make the plates in steel if it deforms - we'll see. I'll be doing LOTS of testing as soon as the weather warms up.

Next job is to make up the chassis mount to attach this bit to the car & make it all work.

Don't know if you can use this pic & the ones in the last post to see how this works, but the turnbuckle (the stainless cylinder) is pulled by the pedal (vertically down in this picture, that pulls on the lever attached to the pulley which rotates about the centre bolt. so the cable clamp is moved round the radius pulling the cable round the pulley as it goes. The other end of the cable is attached to the clutch lever in the conventional way. So the only metal to metal movement in the whole system will take place at bearings designed for the job. Should be good - fingers crossed
.
Posted by BlatterBeast at 17:53 No comments:

For the first time in many many years I'm not suffering from a deep, dark depression in the run up to Christmas - Hurrah! 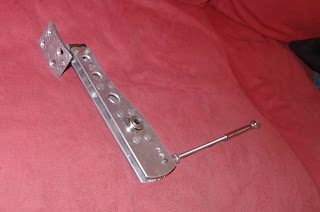 The clutch pedal has been made & fitted to the car - that sofa is BURGUNDY by the way - the pedal has been trimmed a little more since that photo, with some more metal removed & it now resides in the car where it moves just the right amount. The pull rod in the picture fits through the hole in the bulkhead at the moment, but when the next part of the system goes in I may need to enlarge the hole & I have a rubber boot ready if that's the case. at the bottom end of the pedal you can see three holes so the weight & throw of the clutch can be adjusted. 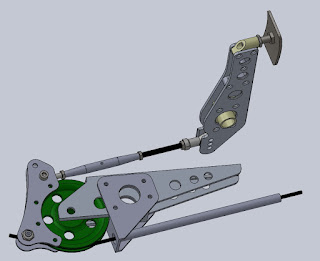 The other parts are drawn up & look like this, (the final shape of the pedals is in this picture) there's a turn-buckle between the pedal & the lever for adjustment & the lever is made from an ex-aircraft control cable pulley so the bearings are of very high quality. The lever then clamps the cable & runs through to the clutch. The bracket will be bolted through the pedal box side wall & to the chassis.

It's pretty difficult to show this even with the CAD model, but in this picture the body & engine are hidden & the chassis shown transparent so it's as good as it's going to get. I know how it's supposed to work anyway & that's the main thing. This picture also shows the mods to the brake master cylinder that's the next thing on the list. 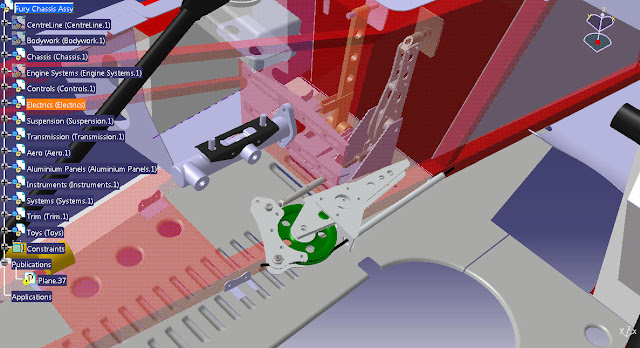 Posted by BlatterBeast at 10:16 No comments:

Some time ago I decided that something needed doing to the clutch actuation. It was way too heavy to push & operated over far too small a travel, making it awkward to drive slowly in traffic. Two of last winter's mods were swapping the Zetec clutch for a pinto one & ball-racing the pedal. These actions certainly helped, but didn't cure the problem.

One of the problems was the clutch cable. It leaves the pedal, passes through the footwell front bulkhead, then loops through 180deg to the clutch fork about two inches from the bulkhead exit point. So there's a lot of drag on the cable outer. I hatched a plan to do away with the cable outer altogether. In plan one, the cable (without the outer) would run from the pedal, directly forward to an aircraft control pulley, then back to the clutch fork. There were risks, the cable would be pulling the engine forward on it's mounts, would that matter? The cable may transmit vibration to the chassis or pedal. Engine movement might make slipping the clutch impossible. 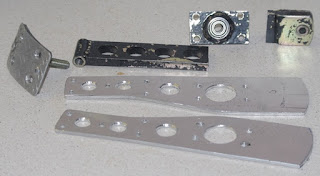 I made up a prototype system & tested it on the car - none of these things happened, so the design has been refined to have a pull-rod on the pedal, pulling a rocker, which pulls a cable, which pulls the clutch fork - that's the plan anyway.

I've also started re-making the clutch pedal with a little more leverage (pronounced leeeverage). It'll use the ball-raced centre section of the old pedal to support two new side plates. Looks good so far.
Posted by BlatterBeast at 20:19 No comments: