Did some tidying up this evening. I sorted out a belly pan bracket that’s had a pair of jig-pins in it for a year, set up the clutch pull-rod & re-fitted the pedal, then re-fitted the brake master cylinder & re-attached the pipes. Lastly, I made a new bracket for the brake fluid reservoir, as the one it came with weighs more than the new bracket AND the reservoir combined.

The new bracket’s the one on the reservoir. 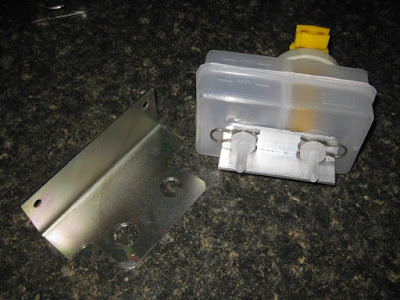 The steel bracket that came with it weighs 225g, the reservoir + the new bracket weigh 205 & that's before any lightening work.

The controls are very nearly back together & the car will soon be drivable, then a few minor jobs, like the cam belt & new exhaust wadding & I shall be back on the road in time for spring
Posted by BlatterBeast at 17:23 No comments:

Well - it's been an interesting day, snow this morning, then meeting my ex wife for the first time in 30 years (long story, it was arranged by my son), but strangest of all was a sheet metal bracket I'd made fitted perfectly first time!!

Usually I make things fit by drilling to suit on assembly, but the bracket that had to fit the brake master cylinder has to fit - no chance to "adjust" to suit - and it did, here's the proof:- 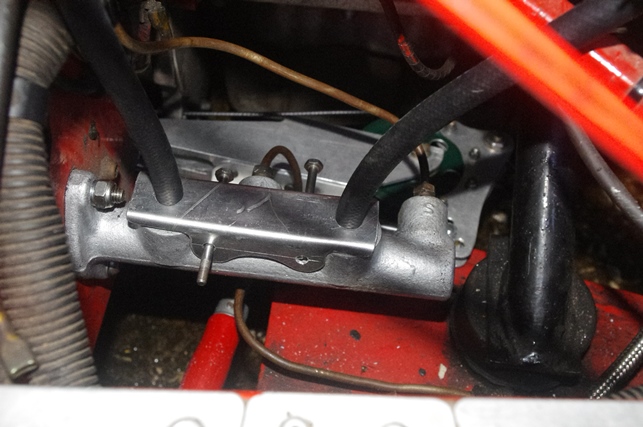 The old master cylinder was fitted with a couple of roll pins & I'm tempted to re-use them, but bolts the right size would be better. I also need some hose clips, but basically that's the brake master cylinder mod done - as long as it doesn't leak.

Posted by BlatterBeast at 16:49 No comments:

Braking Back On The Agenda

The work on the car's controls continues at a snail's pace - but at least it is still moving on. 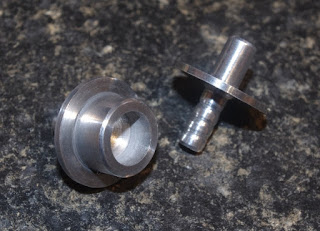 Today I went to my brother's house with a lump of alloy, two drawings & a hopeful expression on my face. He set to on his lathe he made me these exquisite items (it's an engineer thing).

Stop me if I've explained this already, but the brake master cylinder on the car has a built in translucent reservoir so you can see the level of the brake fluid. Except on a Fury it's WAY down at floor level & you can only see it at an angle of 45deg the far side of some chassis members, wiring, hoses & the steering column. 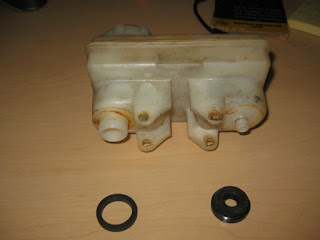 This means that to check the level, you have to take the filler cap off. This is not-a-good-thing as it can allow dirt & moisture in. Obviously the sensible thing is to leave it as it is & be carful when I check the level, buuuuuut I can't help thinking & I took the reservoir off to find this:-

It struck me that if I had two "bobbins" the same size as the output pipes on the reservoir I could use a remote reservoir & mount it almost anywhere - which is where the two exquisite items made by my brother com in - they are the bobbins. 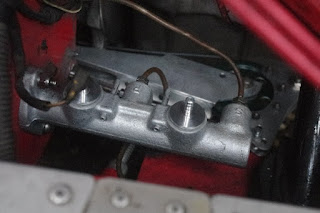 Here they are fitted in the master cylinder, but they will need to be retained or they'll work their way out & the brakes will fail, so I've made the bracket in the last photo (not quite finished) which will fit over the bobbins & attach to the same holes the original reservoir attached to. 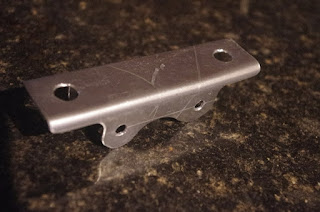 A hose will go onto each of the bobbins & up to the new reservoir & presto - a much better set-up than the car had to start with.

Posted by BlatterBeast at 17:03 No comments:

Yes, I know the clutch is taking far far longer than it should, but it is coming together at last. Today I've made & fitted the brackets that will hold it onto the car & it's clamped in place. I was hoping to drill the chassis & have it bolted on, but the angle drill battery is - for want of a better term - shagged. Been on charge for ages, managed to turn the chuck at about 2RPM. I'll borrow my Brother's tomorrow when I go over to make up the brake master cylinder adaptors. 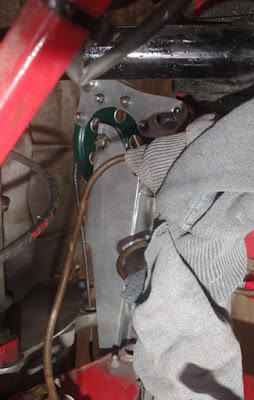 But back to the clutch. here it is clamped to the chassis from above>>
The front of the car is at the TOP of this pic which is taken looking down & inboard. The fabric is a rag stopping dirt getting in the brake master cylinder as the reservoir isn't on it. 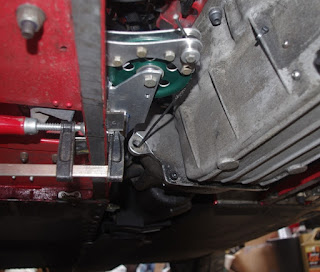 <<< This one's taken from under the front of the car looking up & rearwards, that's the sump on the right & you can see the clutch cable disappearing off into the bellhousing.

So what still needs to be done? Well - drill some holes & bolt it to the car obviously, test that it works, assuming it does, make up another bracket for the cable outer & fix it all together.

Then the brakes, then I'm onto the lesser jobs that can -if necessary - be done when it's back on the road.

Posted by BlatterBeast at 16:03 No comments: