More Progress - And a DELIVERY!

Yes the exhaust has arrived - ordered 24 days ago on a two day delivery, it was eventually listed as "missing" an a new one sent. In the mean time I've very nearly finished the Stylus.

The weekend saw the new polybushed ends put on the rear suspension upper links & panhard rod, then the lower arms were removed, the nasty blue paint removed & replaced with etch primer & matt black (the can be seen from the side of the car, so need to be camouflaged), the new poly bushes are in one & it's re-fitted, just waiting on the pain drying on the second & that will go on, the car will be dropped onto it's wheels while I change the exhaust on my daughter's car & then it's just get the front shocks refurbed & it's all done ready for the spring - maybe late winter.
Posted by BlatterBeast at 18:36 No comments:

Today the Stylus has mostly been a foot up in the air.

The reason for it's elevation was the handbrake - I needed to get into the transmission tunnel to take it off the car & re-drill the cable pull point closer to the pivot so the handbrake works a little better. It was a struggle, but it's done now & I think it's worked, but until I get it out on the road it's hard to tell.

I also trimmed the throttle pedal - odd you might think, but the brake & clutch pedals are alloy, the throttle was black powder coated steel & a couple of times I'd caught it with my foot on its way to the brake. With a lot of power & little weight, the car shoots forward in an alarming way - only for an instant, but still not good, I cut the sides off the pedal & added an aluminium pad, so it's a little lighter, narrower & matches the other two.

After that I took one of the lower rear suspension arms off the car to confirm the size of the polybushes & get some softer ones on order. I've now spent around £400 on new bushes, so I'm really hoping they do what I want them to do. They could arrive mid week, in which case I'll fit them before the weekend. If not I'll have to drop the car onto its wheels & drive it out so I can get my daughter's car in, then do it all again.

BUT, the car is very nearly done. a little paint on the suspension, new bushes, get the front shocks refurbed & it's ready for the new season.

Posted by BlatterBeast at 17:07 No comments: 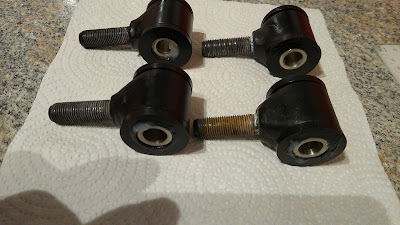 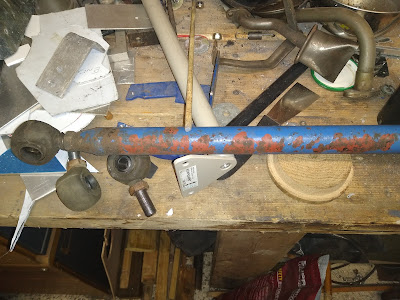 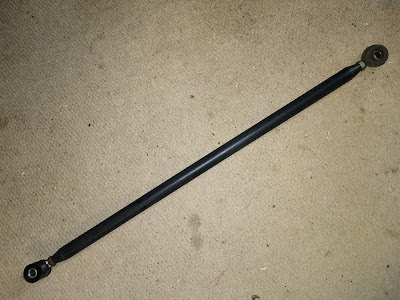 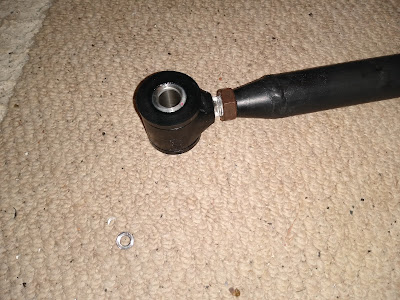 Posted by BlatterBeast at 16:29 No comments:

I contacted Fords about he exhaust I ordered for my daughter's car, apparently it was "delivered" some days ago, but obviously not to me. (sigh)

So I was left with a dilemma, to wait for the delivery & delay immobilising the Stylus until after I'd repaired my daughter's car, or just get on with it. I decided on the latter.

I cleaned up the axle control rods & gave them a nice coat of matt black, & added a new bracket the the fuel tank to support a filter. 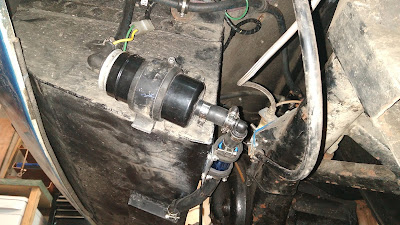 Then I cleaned the rust off the chassis - in fact there was just about none, what there was, was only on the fuel tank support angles, so a good wire-brushing & a coat of POR15, followed by CBS' "Wunderseal & I was ready to put it back together.

So now the pump & filter are tank mounted, the hoses & wiring are all clipped away from the axle travel & the car is back mobile (though everything is only loosely bolted together) should the exhaust arrive. The next job is to get the polybushed ends for the control rods made up. Then it's just a refurb of the lower control arms & I'm about done.

Posted by BlatterBeast at 22:11 No comments:

I serviced my daughter's car last weekend, the centre exhaust needs to be changed because the flexi section has broken up. Euro car parts haven't had any in stock for months, (it says "any part for any car" - it doesn't say they can sell you one) but I found just the thing on the Ford spares site & ordered it. After three days of silence I e-mailed to ask when it would arrive & got a reply saying I'd get an e-mail when it was going to arrive - followed an hour later by an e-mail saying it had been dispatched - they hadn't forgotten it then?

On the up side, I did get something useful done in the garage, I found the source of a light "clunk" in the front suspension, one of the pro-tec shocks make a noise when the shaft changes direction so there's something loose in there, so (again) when it goes up on stands, I'll send the shocks off to Pro-tec for a re-build.

Posted by BlatterBeast at 09:49 No comments: