....... Mostly because they either work, or they don't. If something mechanical breaks or won't work I can generally take it apart & mend it, or at least see why it's not working, often it will "sort of work". Not the same with electronics is it?

Take the Fury's speedo, there was an imbalance between the sender & the speedo which meant the speedo was showing 45% of the MPH the car was actually doing, so I looked at the interweb & found I could get a widget that would correct the pulse rate to anything I wanted. It wasn't cheap, but I ordered one.

I wired it in - it didn't work, the speedo didn't respond to the test signal, I contacted the makers.
"Add a resistor between these two wires" they said.

I did that & the speedo responded to the test signal - great, I started the engine & the speedo went mad, the needle flicking about like a mad thing, I contacted the makers.
"Add two capacitors between these two wires" they said.

I did that & it made no difference. I contacted the makers.
"Add a transistor & another resistor into these wires" they said. 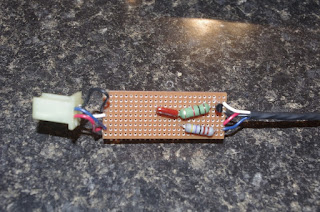 I did that & the now complex bunch of components fell to bits. I ordered another load & a board to solder them to & made the whole assembly again. Being board mounted it was much better (see picture), but once on the car it's still made no difference (sigh).
I will shortly be contacting the makers again.

I have now taken the whole damn thing out of the car & put the dash back in so the speedo will be running at 45% again.


NOT a happy bunny.
Posted by BlatterBeast at 20:03 No comments:

You remember I said it was taxed from the 1st Feb? Well in the wee small hours of that day my Wife woke me up to say there had been a power cut – what she actually said was “uh – s’bin … pwer cu’ ……. ‘laams not on …… se’ c lock ……. (snore) & handed me her watch – a ladies one with tiny tiny hands. So I , being equally ½ awake, re-set the clock & the alarm & went instantly back to sleep.
The next thing I knew was Daughter-the-younger coming in the bedroom to use the shower – which meant I was 20 minutes late having mis-read the tiny tiny watch hands & set the alarm to the wrong time. This meant I would miss my car share, it was dry so I resolved to take the Fury – HURRAH! It went well after its winter hibernation.
I e-mailed 12 O’clock Labs (who made the “SpeedDRD” speedo calibrator) & got an e-mail the same day saying I probably needed a “4.7 K ohm pull up resistor” which of course meant nothing to me, but after some googling & another e-mail to confirm what I’d discovered, I was stood in Maplins purchasing a resistor for the princely sum of 49p. I took the dash out (again), poked the ends of said resistor up the bullet connectors & joy of joys the speedo responded to the first test signal. But what to do? I couldn’t insulate the wires of the resistor & just wiring it between the bullet connectors would result in the resistor wires fatiguing off in no time.
I ordered a four way connector & fitted the resistor & wires to that so everything is all held rigid which neatly solves the problem & after a quick test, everything seemed to be still working. Until that is I started the car - the speedo went MAD flicking about all over the shop (sigh). So the dash is back out of the car & I made a video to show the guy at 12oclock labs what's happening. To their credit I got an answer back on the Saturday, they'd seen the video & think it's picking up interferanve on the input side & possibly the input signal is out of range for the unit, Either way they seem to think it's an easy fix. If it is, then I just need to take the car out & calibrate the SpeedDRD & everything on the car should work for the first time in quite a while.
Posted by BlatterBeast at 16:02 No comments: