I had to work down the A3 again today, so took the Fury, with tools, document folder & safety shoes IN THE BOOT!

Getting the boot lit on was  bit of a struggle, so when I got home I dremeled some GRP off the mating face & adjusted the latch pin & it now fits like this:- 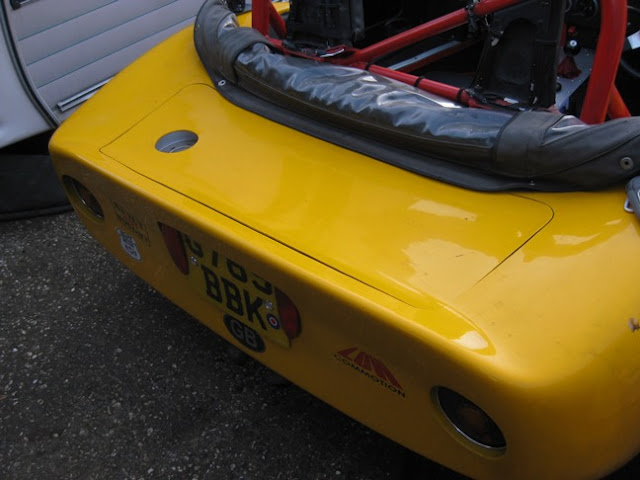 It's maybe not as good a fit as I'd hoped, but it's a better fit than I'd feared & I've not spent much time faffing with it yet, so it could conceivably get better, though I'm likely to get bored & move on to something else.
Posted by BlatterBeast at 21:02 No comments: 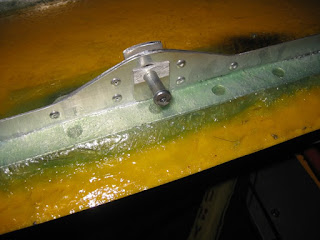 With a lot of hours to lose at work & parts than needed dropping from one site to another, I found myself with an afternoon at home.
I mixed up some GRP resin & put some mat under & over the aluminium beams. I also put some mat round the two big foot fasteners that will (hopefully) pull the forward corners down. 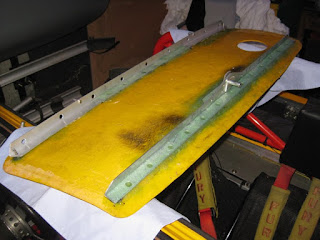 There are gaps under the rear beam, with the GRP forming a thin "skin at back & front. This is deliberate, when I’ve confirmed the fit, I’ll fill the void with expanding foam.
With a very low temperature in the garage, it took ages for the resin to go off & needed a helping hand from the hot air paint stripper. But go off it did & it's currently resting across the screen & roll bar to harden up properly. 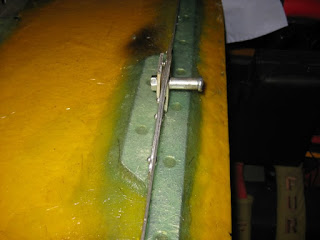 Posted by BlatterBeast at 19:20 No comments:

This weekend I made up the latch-beam for the boot lid, measured all the edge distances & sikaflexed it in place, just at the ends in case I needed to take it apart again. Then, this evening I took the clamps off, flipped it over & adjusted the latch pin AND IT WORKS!

At the moment the front corners stick up & the centre of the back does too, but both the beams are only attached with PU sealant, so it needs them bonding on rigidly with GRP & a proper adjusting, but engaging the pins & leaning on the centre of the panel gets a satisfying "click" & on releasing the latch the rear edge of the boot jumps open 1/2", which is very pleasing (it's a bloke thing).

So the Fury now has a proper opening boot lid with no visible fasteners 😊
Posted by BlatterBeast at 18:36 No comments: 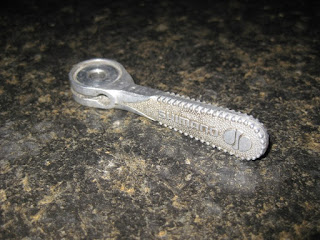 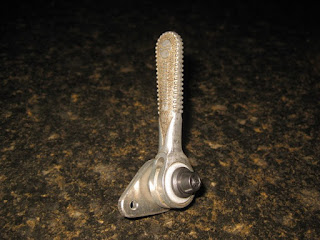 So I built it up into an assembly with a couple of PTFE washers so it turns smoothly & can be attached to the car. 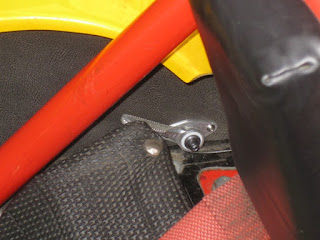 Then today I attached it behind the driver's seat 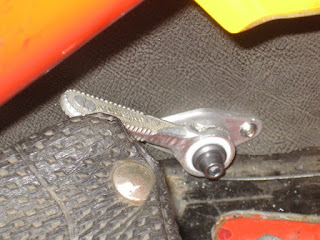 With the cable inner fitted it releases the latch perfectly, so after re-latching & un-latching that a few times (OK, quite a lot of times) I turned my attention to the other side of the latch - the boot lid.

A large aluminium extruded angle had arrived in the post, so it got cut to length to fit between the boot landings, & clamped at each end, I marked a hole to line up with the latch & drilled it for an M8 bolt, so with the hole drilled & a bolt fitted I could latch what will become the rear stiffener of the boot lid. Now I need to shape (lighten) it& find a way of fixing it in place so I can attach the lid skin without any fasteners passing through to the outside. Hmmmm
Posted by BlatterBeast at 16:11 No comments:

Yesterday I had a shocking day, felt absolutely lousy, but I did do some inspired engineering.

I was looking at how to trigger the boot latch & found an old bowden cable outer, presumably left over from the Sierra & a gear change cable from one of the bikes. I made up a small bracket to hold a cable adjuster from a mountain bike brake lever & riveted it onto the rear aluminium edge member where the latch is, then cut a slot in said edge member for the cable to pass through. The cable will run round the back of the boot under the carpet that's not there yet & round to the boot front bulkhead. But I still needed a pull handle, but as ever eBay was my friend & offered up a 1970's Shimano road bike gear shift lever for a few £, so that's on it's way.

Today I looked at the route & how to get the cable through the boot front bulkhead. I looked at the adjuster I'd used at the latch end & wondered if I had another one in my bike spares box. Of course I did (there are advantages to never throwing old tut away). I took the adjusting nut off, reversed it & after drilling a suitable hole, bolted it in as a fairlead through the alloy panel. I also took the Fury to Bordon for work & found when I got home that the front wheel nuts weren’t tight. Eeek!

There will be photos of all this when the lever arrives & gets fitted.
Posted by BlatterBeast at 18:34 No comments: 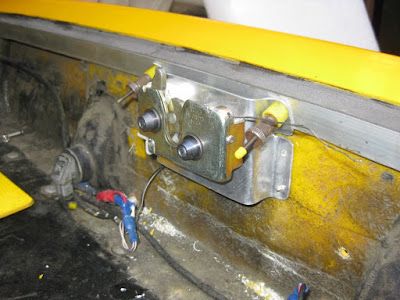 Yes, boot latch, not for the Fury a pattern of Dzus fasteners, or bonnet pins pressed into service, it will (I hope) have a proper cable operated boot latch. 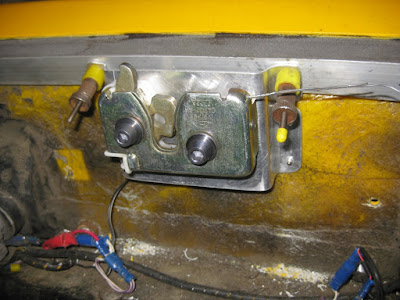 I bought one from a Ford Puma a while ago & have been modifying it, first to remove the fore / aft cable & levers, then to fit a new release method. At the moment the rear boot landing is a shaped aluminium angle extrusion, bonded on with sikaflex, it works, but it needs a mechanical fastening, so I drew up a bracket that would both hold the latch in place & properly fix the rear landing to the car. This afternoon I've drilled the car to take the bracket (just jig-pinned on at the moment) & bolted the latch on to it. It's all looking pretty tidy at the moment.

Yes, it needs some trim or possibly carpet to hide the wiring & GRP.
Posted by BlatterBeast at 17:19 No comments:

Took the Fury into work yesterday & today it went for it's MoT. It's never passed an MoT first time, but today the man could find nothing wrong with it. So it passed right? well - no. Turns out I'd taken it in one day early, so I asked them to fail it on a side light & tomorrow I'll take it back with the side light "mended" so I can get the full 13 months.

On the upside, I was allowed under the car to take proper pictures of the belly pan.
﻿

Posted by BlatterBeast at 16:57 No comments:

Back On The Road Again

Well well well, it's past the 1st of March & the Fury's BACK.

Last weekend I re-fitted the off side pod, fitted the belly pan panels & tidied up the space where the boot lid will go, today, I took it into work for the first time. The boot tidying involved not just removing a load of hand tools, rags & swarf, but also making a couple of retainer pins & an angle to hold them, trimming & fitting a bulkhead to separate the boot from the cockpit - with two grometted holes for the afore-mentioned pins, then clamping the angle to the car, laying on blobs of sikaflex, then putting the boot lid in position & weighting it down.

By the morning, the angle was glued in position - I'll need to glass it on properly, but it's in the place it needs to be. Today I've drawn up a rather neat little bracket which will both hold the rear landing in place & mount the boot latch. It'll be a while before this gets made, but it shouldn't be long before this last of the winter mods is complete.

On the way home the car was popping & "sneezing", a quick look at the hoses that block off air bleeds in the throttle bodies showed one had popped off - again. They are silicone hose which isn't fuel proof, so I suspect they are slowly turning to jelly.

I used the carb balancer to balance the throttle bodies, then went indoors & ordered some small bore fuel hose & some spring clips, which should resolve the problem with the silicone permanently. Other than that it was excellent. No problems with the new clutch, the now fully enclosed engine didn't overheat, nothing rattled more than it did before, so I'm quite pleased.
Posted by BlatterBeast at 20:53 No comments: