I'm kind of moving away from the "barn-found '50s racer" theme the car's had up to now & moving on to a more "classic spots car" sort of theme. Central to this plan is the back of an old sofa (bear with me), is was cream & it wore out through being jumped on by kiddies, the back however was pristine cream leather - see where this is heading now?

The leather has been out in the garage for a year, just to make sure it doesn't crack or fall apart in the cold, so with my marriage crumbling around me (looks like I'll be needing a new garage - preferably with a house attached) now was the time to avoid the family & go to the garage!

﻿ At first build I'd used plain black Renault Megane door handles - they'd have to go & guess what - the Clio had handles with the same foot-print, but shiny chrome levers & a pair (Brand new in the Renault packet) were £8 delivered, so with the old sofa back & a sharp knife I set to work:-


I was quite pleased with the result, & a day or two later did the driver's door to match, only noticing some time later that I'd glued it on with the seam facing the opposite way DOH!

That'll have to wait now to see if there's enough left to replace it when everything else is done.

There's a bit of a dash refresh going on too. the dash will also be covered in ex-cow, but I had some messing about to do first. It is possible to get the dash out of the car, but it's not an easy thing, so as it would be getting re-covered, I thought cutting the dash into three seemed like a good idea. 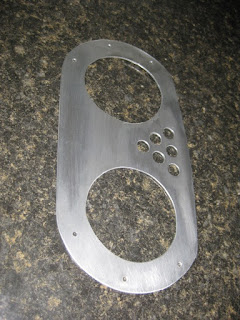 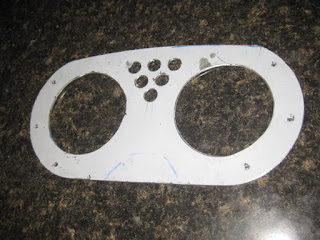 I made the new centre section for the clocks & warning lights, clamped it to the dash & drilled the mounting holes (to ensure everything aligns when it's three pieces). Having got the shape & made quite certain that the clocks & lights fitted in the holes, I peeled off the plastic coating & gave the aluminium a nice brushed finish - that doesn't show up in the picture on the right - with a scotchbrite wheel. 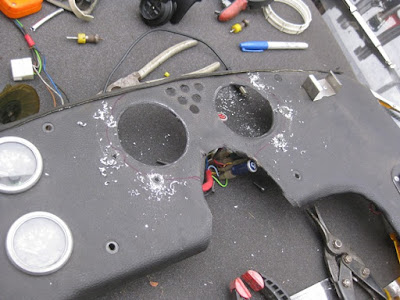 Then I cut the centre out of the dash (eek). There was no risk in doing this as the two parts of the old dash each bolt to enough points to keep it in the right place & furthermore, it was all drilled to match the adjoining piece before it was cut.

But it still felt like a brave move to take the aviation snips to the dashboard.

So with a brave pill swallowed I separated it & rounded off the edges to clear the clocks & make it all neat.

The three parts were offered up & the bolts inserted (all of them, before any wee tightened), it was a bit of a struggle as the warning lights are still on the main dash loom so needed to be un-plugged one at a time fitted & re-plugged - I'll be getting a multi-plug for this to make it easier.

but after donating only a relatively small amount of knuckle skin, it was all in & sorted. 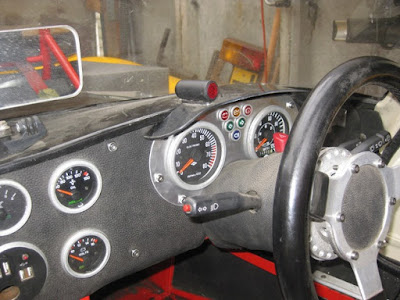 I can't help thinking it looks a bit garish at the moment, but I'm hoping the new dash covering will tone it down a bit. I may need to reduce the amount of aluminium around the clocks by half, but I'm in no rush

Then there was the problem of the Sat-Nav. I broke the TomTom XXL trying to modify it & as the maps were so old that as I got near the coast the voice said "here be dragons" I invested in a new(ish) TomTom 5100 which comes with a cradle dock which is quite neat. I thought "I'll get one for each car" - 'til I saw the price, £35!!

The SatNav doesn't need the cradle, it'll work just fine with a micro USB plugged in, so I started wondering about cutting the RAM mount I had for the XXL to fit, Or just having a clamp arrangement. Fast forward a couple of days & while browsing the interweb for ideas I noticed a side ad for Halford's sale & an official TomTom air-vent mount for a 5100 for £10 - which is much more like it. I ordered one on "Click & collect" from Farnborough as it was out of stock in Guildford. The following day I trundled the 12 miles to Farnborough & requested my shiny new mount. It was stuffed into a box which had clearly seen better days. I took it out to the car park & tested it - nothing. I stuffed it back whence it came & marched back into the shop. The nice young lady apologised & said they had another in stock, then took 20 minutes to fail to find it. I helpfully suggested that maybe it'd been given to the person who returned the one I had. While this was going on, no fewer that three assistants tried to offer me just the vent clip, without the dock claiming it was the same thing. Oh how I laughed

She called another branch who said that they had one - but it was broken too, she then called Bracknell who even though the computer said they had one, they could find neither hide nor hair of it. I was refunded my £10.

On the way home I was thinking that I should've just kept it as a dumb mount & plugged in a microUSB, so on arrival I fired up the trusty laptop & joy of joys there was one showing in Godalming Halfords. I placed the order & set off.

I was greeted by another nice young lady who looked at the order & found me the vent clip without the dock. With sinking heart I pointed out that this was not the thing I'd ordered & she scurried off out the back of the shop - & returned triumphant!! It was the clip with the dock, the packaging was sealed & back in the car park it worked!! So my "bargain" had saved me £25, but cost me four hours of my life, two gallons of fuel & 90p in car park fees.

So I had a mount that worked & was wondering how to butcher it to fit. It works by having two rubberized prongs to fit over a vent grille bar & a large rotating disc which pulls them together, thus clamping the grille bar. I unscrewed it all the way, the prongs fell off & inside was an M5 thread that does the pulling. 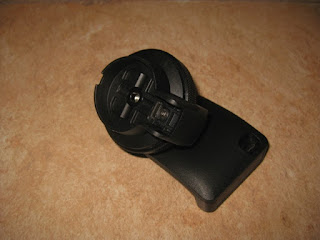 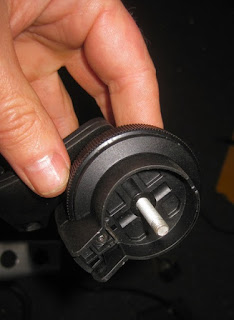 I put some M5 studding in that, flattened off the face it clamps up to, drilled a hole in the dash, penny washer & nut on the other side & Bob was my uncle. 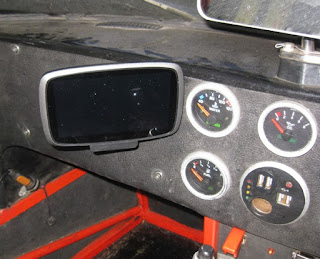 I think it looks quite neat. 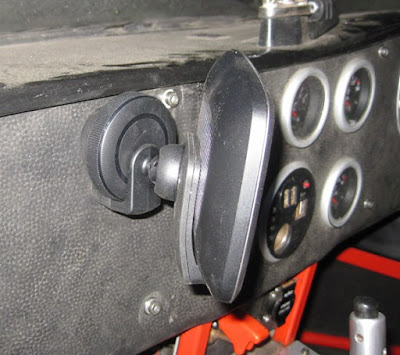 This is the rear view, again, it looks quite "OEM" (ish).
Posted by BlatterBeast at 21:57 No comments:

Not a great deal has happened since the last post, none of it photo-worthy, but progress has been made.

I took down the near side pod, took the over-wheel section of the exhaust off & re-shaped it further forward & upward, so it now clears the wheel by a much larger margin & the car should be tyre-smoke-free on right hand bends with a passenger (fingers crossed). This of course involved WELDING - a thing I'm not very good at, but after blowing a lot of holes in the pipe, I bought an auto-darkening welding helmet & was then able to heal-over all the holes. Not pretty, but job done. As the pipe is now further forward & further out, I had to re-cut the trailing edge of the pod to fit round it & noticed the upper face was all cracked where it bolts on, so made up an aluminium plate & fitter the anchor nut to that & pop-riveted it on so the area's all nice & reinforced.

It all went OK until I tried to start the engine & it just turned over & over & I realised I must've got the cam timing out by one tooth (DOH!). This morning I took out & cleaned all the plugs, left 3 of them loose in the car so I could turn it over, locked the cams & CAREFULLY rocked the crank back & forth until I was happy No.1 piston was at Top Dead Centre (TDC), then CAREFULLY threaded the belt round the pulleys again. This time it fired straight away, so I'm happy all's well.

Like I said, nothing very interesting or exciting, but it needed doing.
Posted by BlatterBeast at 17:09 No comments: