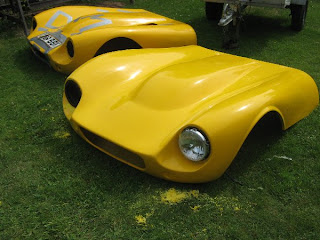 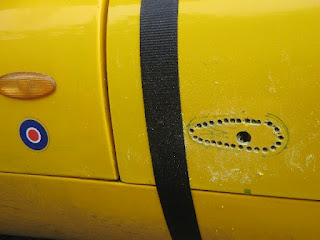 Next was cutting the sides for the aero-catches& trimming the bonnet flange, then stiffening it again with an alloy bracket. I started with a large "sighting hole" to make sure I was in the right area, then marked the catch profile & chain drilled the hole to suite. The latching isn't as good as it was before, partly because the bonnet is more flared than the old one, maybe making it from thicker GRP makes it "spring" when it leaves the mould? Anyway that's done now, just needs a little adjustment I hooked up the wiring & tested the lights - all OK, then I had to stop as I was bushed & making silly mistakes. Would you believe I've spent TWO DAYS on this? & there's probably still another day to do.
Posted by BlatterBeast at 21:10 No comments: 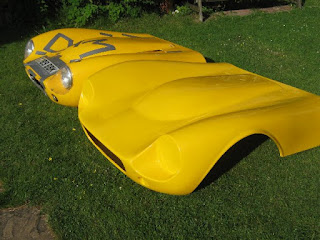 With the new front in my possession & the women-folk away, it's time to get down to some fettling. I've stripped the lights out of the old bonnet, fitted the new hinge frame, & trial fitted the new bonnet.

The new bonnet seems much stiffer to move about, but isn't noticeably any heavier - which is good, there's no point weighing the bonnets as one has cut-outs for the lights etc, & the other hasn't - yet. It seems to fit better too I couldn't get the old one to sit straight & true when I fitted that, but this one seems a lot closer straight out of the box. Nice to see that Fury Sportscars are improving the quality of parts.
Posted by BlatterBeast at 11:42 No comments:

After what's seemed like a very long wait, I picked up the new front for the Fury today. Nuff respec to Fury Sports Cars, it was available when they said it would be (unlike the fuel tank that I'm STILL waiting for), & appears to be higher quality than the Kit Car Workshop era front the car has, the lay-up of the glass fibre is better, the grille slot is pre-cut, & the general finish seems to be better. I haven't had time to put it next to the car to check the colour match & on the down side they must've refurbed the mould because there are now flares over the wheel arches - personally I preferred it without, but we'll see what it looks like on the car.

Very definitely improved is the hinge frame, now made in polished stainless rather than plated steel, the welds are a thing of beauty, & it sits on the floor with all four legs touching, which would suggest that it's straight.

So, happy days - I've booked Monday & Tuesday off work so I can get on with it, & I shall be almost woman free as Mrs Blatter & daughter-the-younger are away in the caravan.
Posted by BlatterBeast at 18:19 No comments:

Flattery Will Get You Anywhere

Last weekend a couple of Mrs Blatter's friends appeared on the drive because they were local when their daughter came over all queasy, so while she was fussed over in the house, I chatted cars with "Mrs Blatter's-friends-husband" who it turns out has a Porsche.

One thing led to another & ignoring his daughter's plight, we took the fury out, & during the trip he uttered the words "this is quicker than the Porsche". Ah, music to my ears. OK his Porsche is only a Boxter S - a car with the same power / weight ratio as the Fury pre-Zetec, but still nice to hear.

With the sudden arrival of summer (the jetstream's moved north apparently) the Fury has been my conveyance of choice for getting to work. The new bonnet should arrive on Friday & the new fuel tank is overdue (forecast this week), so things should be happening on that front shortly.
Posted by BlatterBeast at 07:32 No comments:

I'd been working on a plan for a while, link up a load of roads I liked & that had some memory attached to them into a route - that would be good wouldn't it?

Starting at Newlands Corner, the route went south to Cranliegh & picked up the Dunsfold Aerodrome to Godalming road, then across to Farnham, up to Fleet to take in Teweseldown, back west for the Pirbright Ring, then the wiggly roads south of the Hogs Back, the Ranmore common to Box Hill, Ending at Redhill Aerodrome for breakfast.

Unfortunately, my plan was ill-conceived, the roads I chose, while windey enough to be entertaining were not really wide enough for blatting & there was far too much suburbia between the entertaining bits. Another thing there was a rich abundance of was traffic, motorised in the west, man (& woman) powered in the east - the Box Hill section was something of a disaster, I'd unwittingly picked a lot of roads from the Olympic cycle race route, so we were driving in amongst cycle clubs for all told about ten miles & while we tried our best to stay behind them & overtake only where there was plenty of space, I'm afraid low & loud cars are always perceived to be going considerably faster than they actually are. This was particularly evident at the top of Box Hill. We had weaved our way through a small gaggle of brightly coloured cyclists (mostly riding two & three abreast) & accelerated ONLY where there were none in evidence, but at the top one of our number was pulled by a gentleman of the police - which was fair enough in the circumstances, but every cyclist who passed by felt the need to interrupt the ensuing lecture to tell the policeman that there were three cars all doing at least 150mph.

Anyway, two things were not a disapointment - the breakfast, the weather & the car ..... three ....... THREE things were not a disapointment. By the time we got to the airfield a number of other SKCCers had arrived - sensibly ingoring my route & heading straight for the food. So there was a sizable table of us tucking into our full English. From ordering to eating was no more that five minutes so top marks for service go to the Redhill Aerodrome Cafe. The weather was wet just before we set off, but dry for the entire run & even bright & sunny at the end & the car didn't cause any heartache. So that's all good then.
Posted by BlatterBeast at 16:28 No comments:

Cruising, But Not As We Know It

Mr Mango had created a route north west towards Oxford and the forecast was for rain around Guildford, dry round Oxford, so why not!

At the appropriate time I sauntered out to the garage, Mrs Blatter had left her car to one side, so no problems there, I pushed the Fury out into the sunshine, strapped in and turned the key – nothing. I checked all the switches, then got out and checked the fuses, the usual suspect had blown.

I tried to text Mr Mango that I wouldn’t be attending, but the phone had no signal, I mean NO signal, I walked up the road, no signal anywhere. Then, with time ticking away I thought if I took the brake microswitch out of the circuit, all should be well and indeed it was, so fuel-up and head out to the carpark just off the M3 were we were meeting up. Nick, David T and new guys Aaron & father-of-Aaron were there, so we were only waiting for the very local MangoDave. At this point I was distressed to note that my ancient phone still had no signal, had it finally died? After a couple of minutes, Mr Mango appeared and under darkening skies we set off.

I was more than a little concerned by the oil pressure gauge, it was showing 4bar at decent revs, but dropping to 0 at idle. As will happen on these occasions, I thought the water temperature gauge was rising, I thought the pressure was dropping more when cornering and I fancied I could hear a tapping coming from the engine, after a few miles I found a petrol station and pulled over assuming the engine was short of oil. The dipstick said otherwise and turning the engine over on the starter made the oil light go out instantly, so assuming it was a gauging fault we set off again.

It seemed we were following the rain, there were puddles of increasing size as we went along, but apart from a section flooded to a depth of 4” and an emergency brake caused by a duck, we arrived at the pub (another “The Lamb”) without incident and after gawping at the rather spectacularly proportioned young lady behind the bar for a while, we went and sat outside before we got a slap.

After the usual banter, we noticed the approach of heavy clouds and quickly mounted up. Not quickly enough, the large splats of summer rain began as we were pulling out of the car park – I hadn’t put the hood up because we were in a hurry to leave and it would at worst be a short sharp shower, however I hadn’t bargained on a few things, first our leader turned the wrong way out of the pub, so after 50 yards we had to turn round, then the route doubled back on itself through the rain again, THEN the route ran along the weather front, keeping us in the shower for what seemed like ½ an hour, but was probably only 28 minutes.

If you can keep the speed up, most rain is lifted over the car by the screen, but when it’s raindrops the size of ping pong balls, it’s dark, the road meanders and the screen AND your glasses are steaming up, speed isn’t an option. Eventually the MangoFury pulled over and a large umbrella appeared, I drove on and after a few miles found a closed petrol station to shelter under and dry the screen / mirrors / seats and put the roof up, but of course by then the rain had stopped, and after waiting a while for the SKCC – who didn’t appear – I set the satnav for home and went but the most direct route.
Posted by BlatterBeast at 15:52 No comments:

What summer I hear you ask. Quite, I've just cancelled another run out due to weather & the long range forecast isn't getting any better. This was to be my "Memory Lanes Blatt" taking in some of the best roads around north west Surrey, but the weather's killed it again. This one's time bound too as it went past Farnborough Airfield, & it's the airshow next weekend, it also passes up Box Hill as there's no speed humps at the moment because it's on the Olympic cycling route.