Realised I'd not put the latest news on here. While staying at my brother's (long story), he got the belly panel punched for venting 😊. They're not fitted on the car yet, but they look like this:- 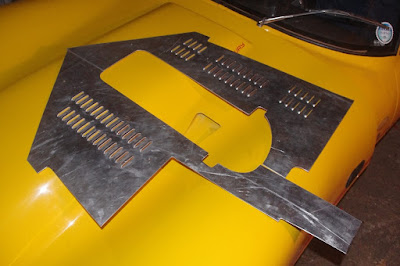 Now it has been suggested that the large hole in the middle looks a bit rude, but surely only if you're a lego man.
Posted by BlatterBeast at 09:16 No comments:

After yesterday's efforts panelling the underside of the car, I did less today (it was -5C outside when I got up), but I did cut out a blank for the front wall of the boot, & rough-shaped a panel for under the front of the chassis / splitter.

I might be having a change of plan there. I had intended to take the floor surface forward under the front of the body, to split the airflow into engine bay air & under-the-car-air, but looking at it as I made it, I think it might make more sense to bend it 45deg up at the front chassis member, doing that will direct between 1/3 & 1/2 the radiator air under the car rather than into the engine bay. this is going to need some thinking.

On a less positive note the boot lid is looking rather curly, I've left it on the rear deck in the hope it would retain it's shape, but it seems to be gaining shape at an alarming rate. I've bought it indoors & laid it on a flat surface in the hope it'll flatten - or at least mot bend any further.
Posted by BlatterBeast at 15:48 No comments:

Not a new kind of pizza with a domed underside, today I ar bin mostly aluminiuming.
It didn’t begin well, I couldn’t find the template I made of the front chassis, I couldn’t find the Stanley knife, “they’re only a few quid, I’ll buy a new one & I’ll take the in-law’s car & refuel it, then park it so I can charge the battery" – good plan – except the in-law’s car battery is already flat.


Push the in-law’s car to a place where I can re-charge the battery, hook up the charger, take my car to B&Q, which is FULL of families with v-small children gawping at Christmas trees & lights & generally getting in my way.
The idea of the belly pan is to make the underside of the car smoooth, the air passing under the car is less disturbed & the car is faster. On most cars it can't really be done because a production car has a lot of shape in the chassis to give it strength. On the Fury it can be done, the underside of the cockpit is flat anyway & I made up panels for the underside of the transmission tunnel & the diff cage when I built the car. The idea of panelling under the engine bay on my car is really to keep stone chips away from the chassis coating & keep the engine bay clean. There is of course a down side & often, the close panelling stops air getting out of the engine bay - if warm air can't get out, cool air can't get in & the engine cooling effectively stops. On my car the belly pan with be louvred, with the open side of the louvres downward & to the back so the forward motion of the car should pull the warm air out - fingers crossed 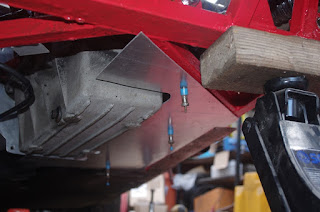 Anyway – I found the template, I now had a knife. I cut the outside profile of the near side panel plus a little wriggle room, then offered it up & marked out where the engine was, I cut out a space for the sump & offered it up again marking where the outside was too big. After some fiddling about it fitted nicely & I drilled it to match the brackets I’d fitted some weeks ago.
I say I cut the panel with a Stanley knife, for those not familiar, I use a straight edge & a craft knife to score the aluminium, then repeat a few times, then gently fold the sheet - it'll crease along the score, then bend it back & forth - only about 10 - 15 degrees at a time, until it splits in a perfectly straight line. The edge will be rough & sharp, but is easily dressed smooth with a small file. 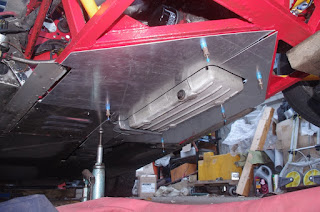 The off side was much the same except for fitting the new piece round the louvred panel already fitted under the pedal box. But as the photos show, it all looks rather good – of course the only things to ever see it will be the MoT man & any squirrels unfortunate enough to find themselves under there. 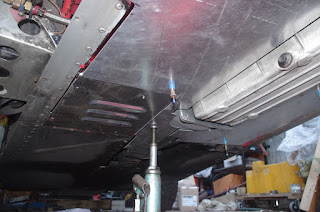 Next jobs are some more brackets to support the outer edges, getting the panels louvred to get the engine bay air out, start on the forward panel / splitter & get some Dzuses (other 1/4 turn fasteners are available) & get it all finished. Then I can get back to doing the boot - I've had  few ideas on that score & I'm getting keen to test them out.
Posted by BlatterBeast at 16:34 No comments: