Today dawned fine & clear - not a cloud in the sky, so in a blatant attempt to condition my wife to the Fury before the run to the Isle-of-Wight, we set off for Wisley & the RHS gardens therein. As I'd deliberately plotted a course through Woking so as not to subject her to the full blast of the A3 at 70mph, we arrived from the "wrong" direction & drove past all the traffic waiting to park, before turning in & joining the queue. It seemed the twin draws (a pair of draws?) of spring bulbs in bloom & butterflies in the green house was attracting the middle classes from far & wide.

As it turned out, the queue wasn't too bad & we parked only marginally closer than Woking & began the long trek in. There were disappointingly few pretty flowers out - I can just about tell a daff from a daisy, but it made for a pleasant walk - & my wife hadn't complained about the car, though I had fitted the special headrest for her, so I felt I'd made the effort.

As we watched, the sky darkened - there were a few spots of rain, so while the love of my life went to "powder her nose", I slipped out & erected the soft top - no side screens - I'd left those in the garage as the sky was SO blue. So we had a coffee in the cafe & waited for the rain to stop - it didn't & what's more it wasn't even pretending to try, so in the end we made a dash for it, & my wife elegantly ended up bum in the seat, legs akimbo, one in the car & one out, oh how we laughed! So after we'd regained her composure & zipped the roof back across her, I climbed in myself & we headed for the A3. This was indeed going to be a test of the practicality of transporting my wife by means of the Fury, it was fast, it was loud (for some reason louder than with the top down) & it was wet - by which I mean actually dripping on her. But she took it in good heart & we arrived home still on speaking terms, so now the only thing that can stop us Fury-ing the Isle-of-Wight is the weather - fingers crossed.
Posted by BlatterBeast at 21:17 No comments: 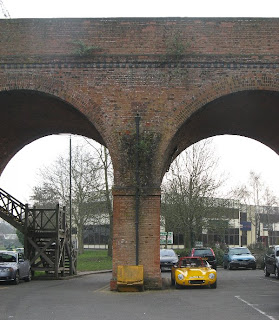 After work (which is looking up a bit - interveiws booked with two Co.s & interest from two others) I fitted the new memory card to the bullet cam & went out for a little blat round the town & up to Newlands Corner, I stopped off & took a picture for "V - Viaduct" on the SKCC's photo competition, not brilliant but it's an entry. The gadgets - the GPS logger & the bullet cam both worked properly - hoorah! 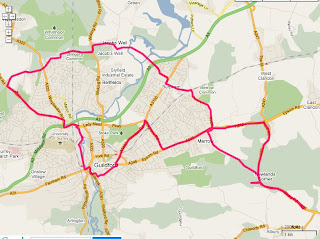 On an associated note, I've booked myself in for a "track-day taster" at Brands Hatch on the 15th of March, hope it's dry.

I've had to hire a crash hat, so if I'm going to do this sort of thing regularly I'll need to buy one.
Posted by BlatterBeast at 21:27 No comments:

Not only has the Fury not been out of the garage this weekend, but I'm not sure the door has even been open I blame a combination of constant precipitation & St Valentine, who made me spend a great deal of time walking out with my wife - which was nice, we had lunch in Woking before going to see "The King's Speech" which was really very good, in spite of absolutely nothing happening from start to finish. On the Sunday we wandered about the RHS garden at Wisley & looked at the snow-drops, hyacinths & daffodils that weren't open.

Of course it's forecast sunny all day today now I'm back at work Hrmph. Might bring the Fury in to work later in the week
Posted by BlatterBeast at 07:59 No comments:

In spite of neither of them working on the last blat, I've done some work on the gismos, the camera now has a rubber tube to protect the rear face from the wet stuff & a small mirror so I can see if it's running from the driver's seat. The GPS logger is now mounted on a quick-release bracket made from an old (& very cheap) bike front light. 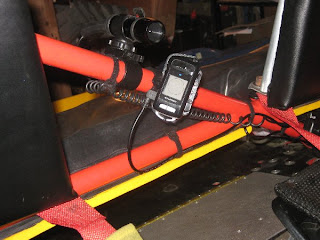 No blatting this weekend, it'll be valentine's day, so I'll be getting told why I got it wrong this year.
There's a few things coming up though, the SKCC might be holding a track afternoon at Brands Hatch, & there's the trip to the Isle of Wight that I'll take the Fury on if it's not forecast too wet - this will require the boot rack as my lovely wife & I will be away for four days, so I'm guessing there'll be a lot of luggage. I have designed & built a boot rack that clips on the roll bar & I have a couple of waterproof holdalls, so there should be enough space.
Still haven't cleaned under the bonnet or looked at fitting the mudguards - maybe tomorrow.
Posted by BlatterBeast at 18:24 No comments:

All Quite Noisey On The Western Front

Another blat day - Hoorah!
Roused from my bed at 06:10 (a good long lie-in compared with some of the blatters) & pottered about drinking coffee & collecting up the essential gadgets, until it dawned on me that the meet time was 07:00 not 07:30. So I was running late then. Hurling stuff in to the Fury & moving my wife's car out of the way, I headed off in the general direction of Alton with the satnav showing an ETA of 07:15, fortunately it was wrong & I arrived at five past, hooked up with the SKCC, & a couple of members of the Sunrise Sevens & handed over a starter to Rob, who's need for one was demonstrated each time we stopped as he had to be push started again. It was cold, it was drizzling, & only three cars out of 12 had windscreens. But it wasn't all bad news - one of them was mine! 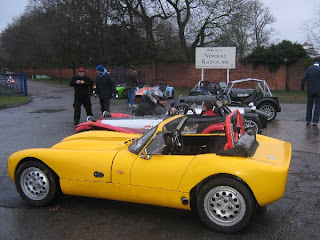 We pootled off along some wonderfully undulating roads, stopped for a photo break at Newbury (H for horse racecourse), then headed out & back on a variety of roads, all of which were greasy, but a little cleaner after we'd passed by. The further west we went, the wetter it got. At one point there was a slight altercation caused by a closed road which made the gathered ensemble look like a scene from the Keystone Cops as small groups of cars broke & rejoined formation from unexpected side roads due to different satnavs choosing different routes - oh how we laughed. 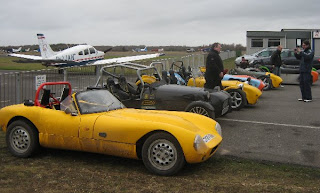 In the finish we arrived - more or less together at the cafe at Blackbushe Airfield for a full English breakfast - I have a sneaking suspicion that S.K.C.C. secretly stands for "Saturated Kolesterol Collectors Club".
As the pic shows, the Fury was not so clean by this time, looking like a racer that's just finished 24 hours at Le mans - excellent!

Don't know what it was we'd been driving through, but it set like concrete in the engine bay.
Remember I said I'd stowed the blatting gadgets? The GPS logger & the bullet camera? I forgot to switch on the logger & the camera didn't work - I suspect the micro SD card is duff. so the above photos are all the record I have I'm afraid. No route length, no video of one of the clan ripping his nearside front wing off when it started flapping (dammit).
Good blat though.
Posted by BlatterBeast at 20:54 No comments:

After work today I washed the Fury & headed down to Dunsfold where I used to work (ah - the memories of "sunny dunny") as I had arranged to take some photos of the Fury next to a Sea harrier for "A" aeronautical - and i just wanted a photo of my car next to one). 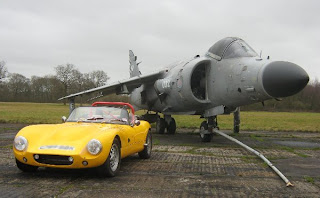 So I arrived & was shown round to the aircraft parking area by the very pleasant & professional Lucy who I'd made the arrangements with. I lined up the car next to the planes & started snapping, while Lucy made sure I wasn't taking any parts for spares (it has been known to happen - not by me I hasten to add). After about 5 mins a security guard drove up & started remonstrating with my guide, she looked a little abashed & said I actually shouldn't be taking photos & I may have to delete the ones I'd taken. I followed her back to the management building where she went inside - it would seem - to be scolded. She had checked with her boss first, so she'd done the right thing, just a lack of communication / knowledge really. Anyway, I wasn't asked to delete the pictures, one of which is here presented for your enjoyment dear reader. So hopefully Lucy didn't get in too much trouble, maybe if she did she could use this as a reference? She was VERY professional at all times.
Posted by BlatterBeast at 19:58 No comments:

...And There Was Light

Hoorah, the spots work without the sound effects, there seems to be a slight problem with the near side one not always coming on, but I expect it's only an earth problem & will be easy enough to fix. Tomorrow I have an appointment at dunsfold to photograph the car next to a Sea Harrier for the club photo competition, it'll be nice to be back where I used to work. 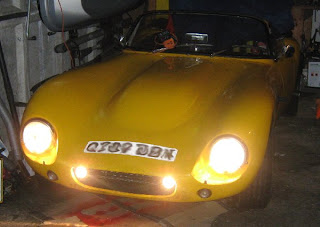 Posted by BlatterBeast at 17:38 No comments: