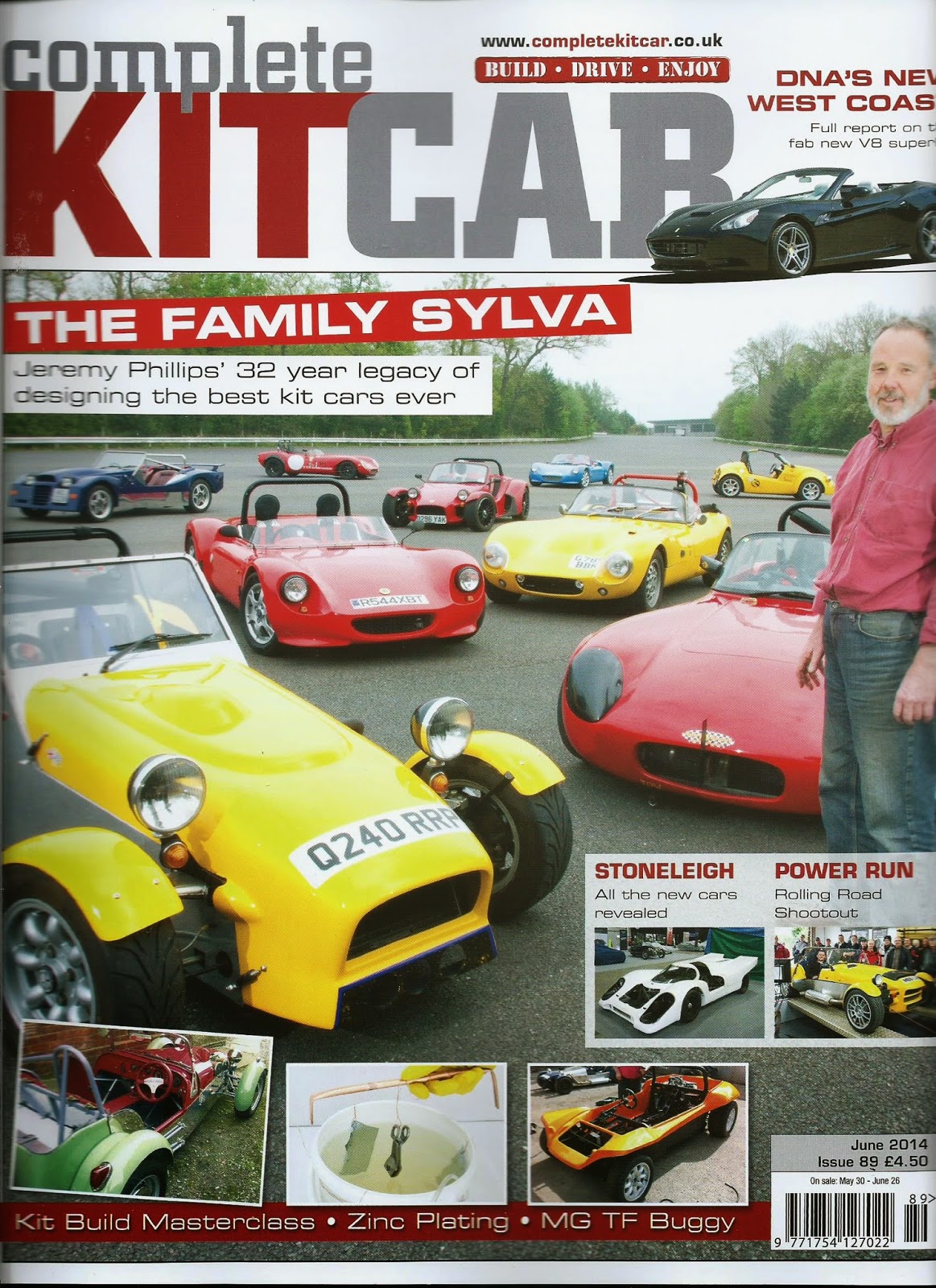 And there dear reader, 4th from the front is my Fury. I was invited by CKC to attend a small gathering at Donnington race track, the plan being to put together one good example of each of the esteemed Mr Phillips' cars.

It was a long old trek to get there, but nice - no - an honour, to meet the man himself & the Fury behaved impeccably throughout - as did the rest of the Sylva designs present. Inside the magazine is a long article about JP & his cars, the stories of each car present will be the subject of an article next month, so I'm going to have to buy another when that comes out.
Posted by BlatterBeast at 19:33 No comments:

The Last "Exhausting" Joke - I Promise - For Now 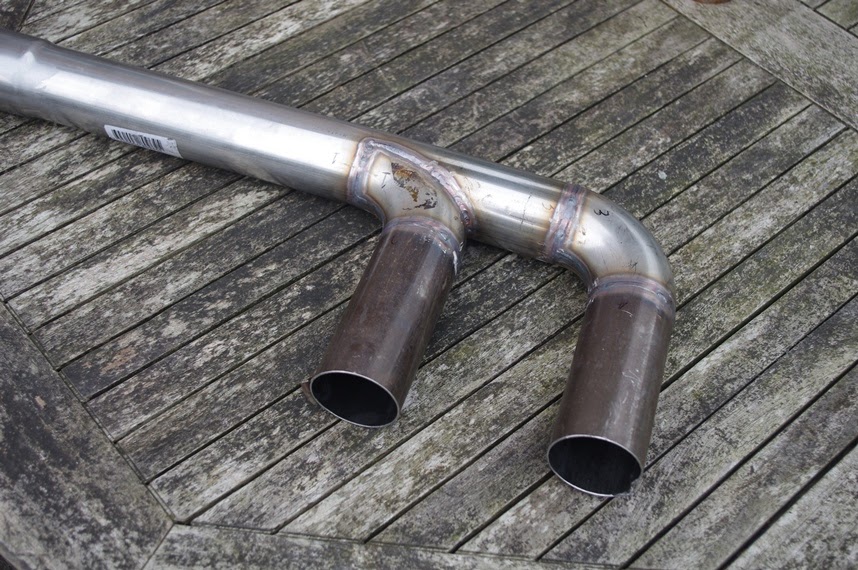 That's because (fanfare) the extended exhaust is finished. Today I picked up the welded tail section from Ashby Welding (www.ashbywelding.co.uk) & what a lovely job they've made of it. 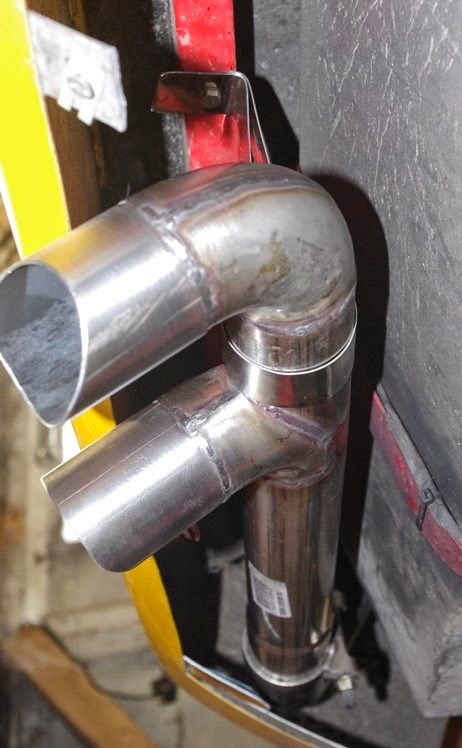 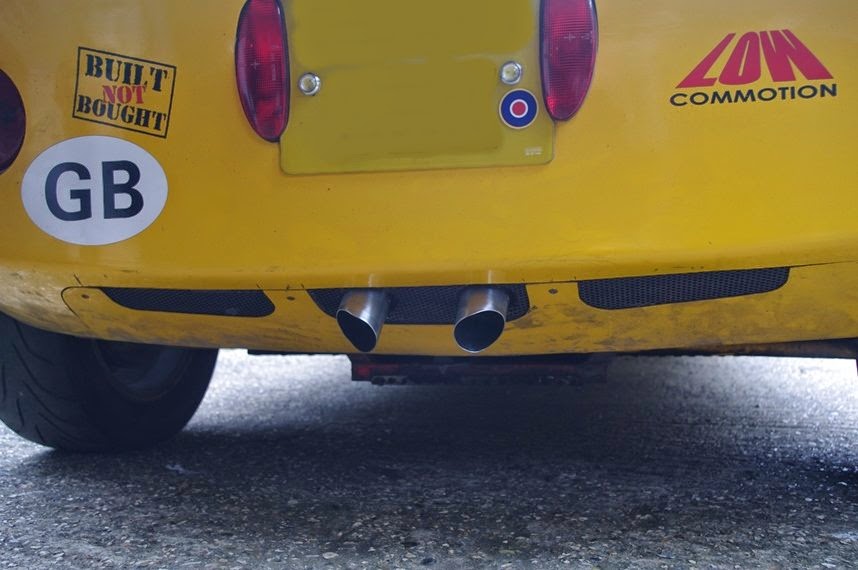 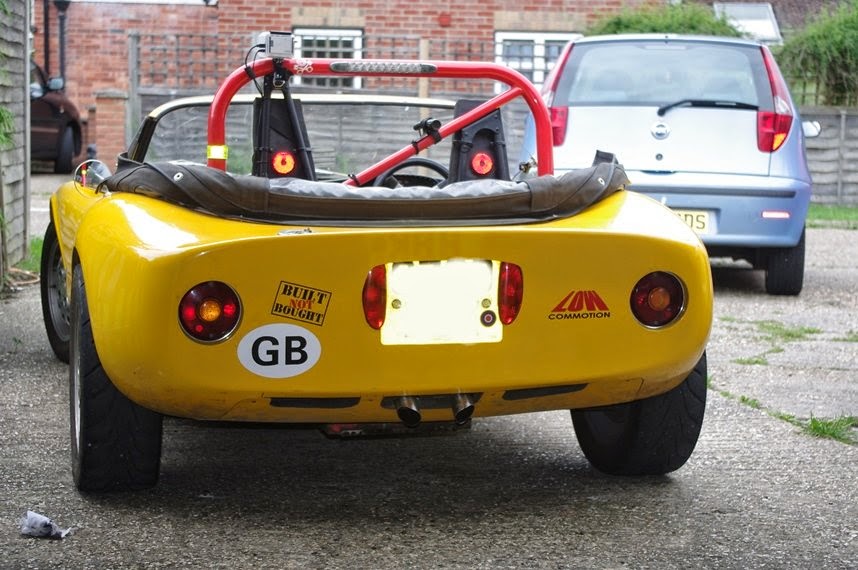 As soon as I got home I trimmed the tail pipes to length & shaped them a bit - purely for artistic impression - & made up a stainless steel hanger to the weight of the tail pipe isn't hanging from the last bend, I also cut holes in the grille over the central vent in the removable valance. After a quick brush up with a wire brush, I must say I think it looks pretty good. On the evidence of a few miles - no fumy smell in the car at all.
Posted by BlatterBeast at 18:37 No comments:

So, with the exhaust more or less in place, all it needed was a mount near the back & I could put it back on it’s wheels & drive it – it’s still waiting the tail pipes, but with the rear valence removed the exhaust was clear of the car. 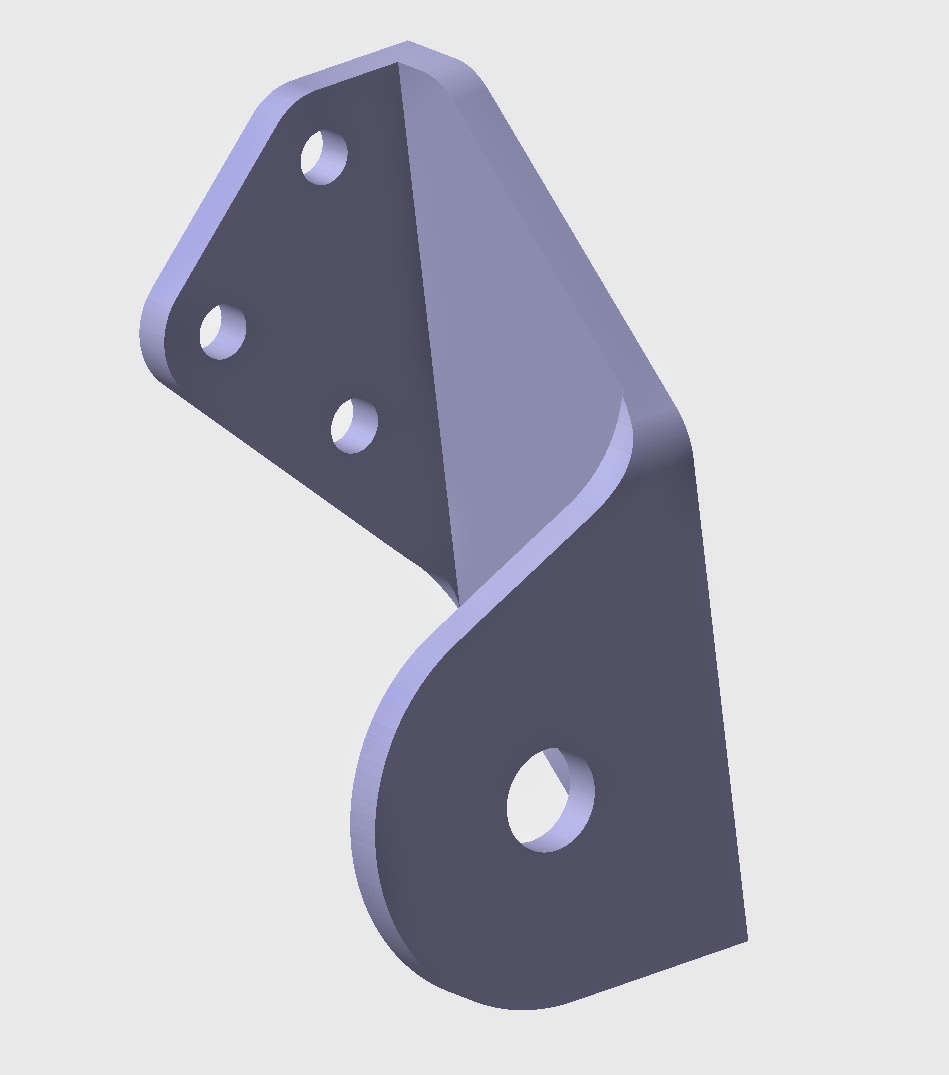 The exhaust was passing the main chassis rail behind the wheel, so having found a short length of aluminium channel left over from the alternator mount, I cut it to suit, squirted it with black pant & with a little sikaflex as jointing, riveted it on. As it doesn’t show up terribly well in the wheel arch (this is a good thing) I offer a CAD drawing so you know what it looks like. 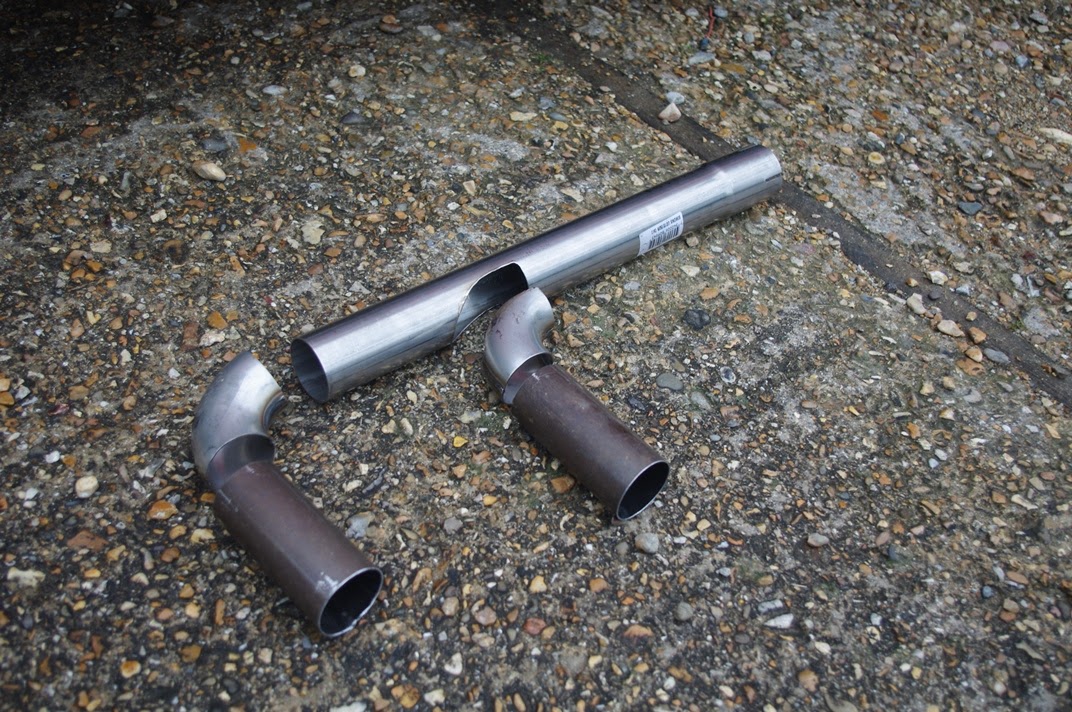 I’ve also cut & shaped the tubing for the tail pipes & will drop them into Ashby Welding this evening as this section will be visible & my welding REALLY isn’t good enough for that.


Assuming I don’t find that the tyre hits under full bump, the car’s drivable again. Hoorah!
Posted by BlatterBeast at 17:50 No comments:

The door mirrors have always been a bit of a problem, when I built the car it had a plastic mirror that complied with the SVA rules, it was large & ugly & “fell off” soon after. Other people either use racing car mirrors, or motorcycle mirrors & this is fine & dandy. But I (being a finicky twit) wanted chrome circular mirrors to fit in with the car’s style as I saw it. I eventually found something that I felt would go & fitted them – only to find that mostly, all I could see was the rear wing of my own car. After humming & harring I made a couple of alloy brackets that lifted the mirrors, but sadly all was still not well.


The mirrors were flat so had a small angle of view, quite a lot of which was obscured by the deflector & it’s strut. This made driving on the continent quite scary as with luggage on the back I had no view over my left shoulder at all. 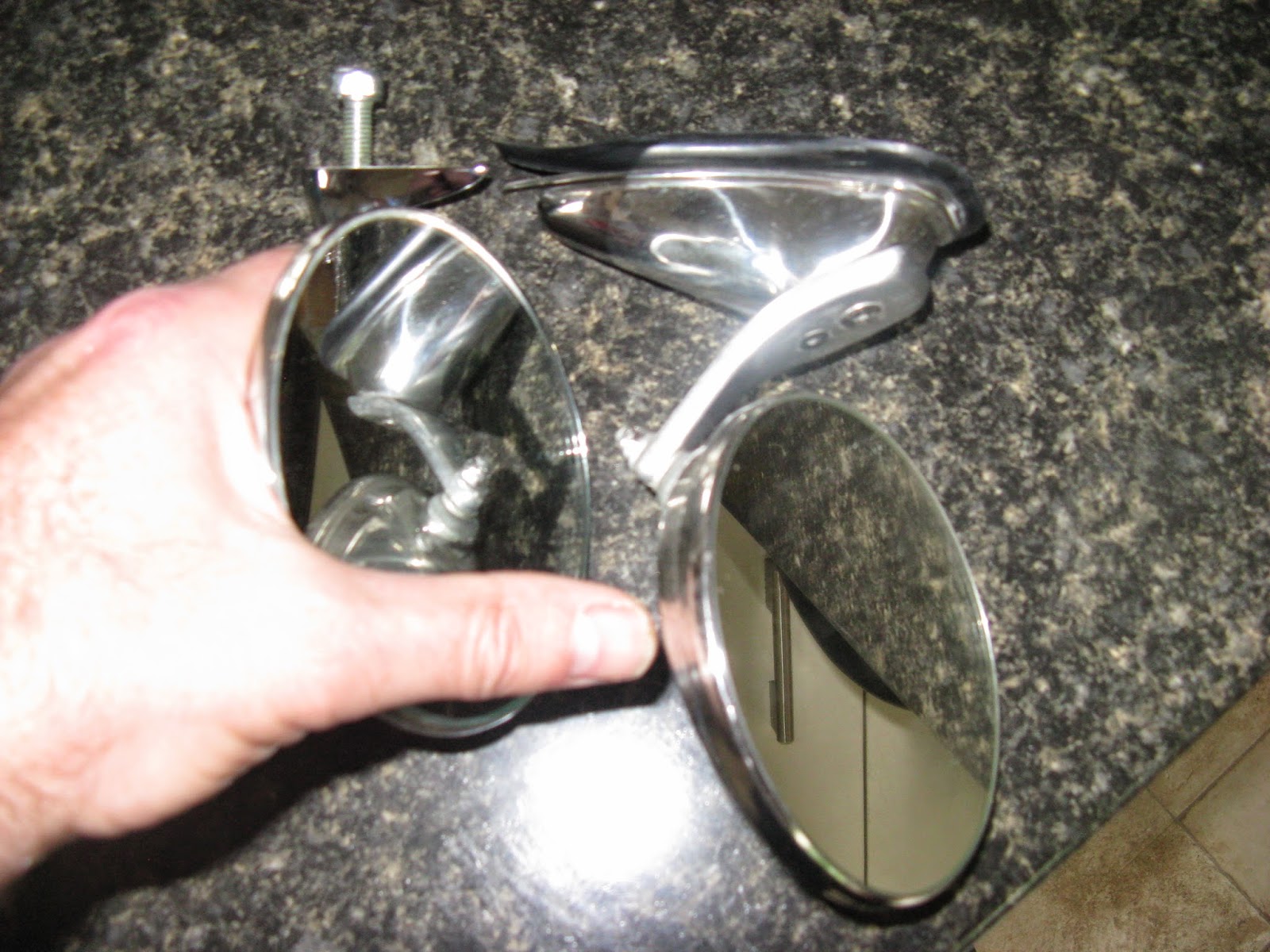 A solution appeared when Car Builder Solutions stocked a new mirror, one that was chrome & on quite a tall elegant stalk, also they had convex glass so had a much larger field of view. I ordered a pair, & when they arrived I rushed excitedly out to the garage & placed them on the doors.

Problems appeared. First the foot was not large enough to cover the two holes left by the previous mirrors, second, fitting them to the doors meant the doors would no longer open – or at least you’d need to take the deflectors off before the door would open. I thought about this for a long time. I thought about moving the deflectors, I thought about fitting the mirrors somewhere else. At last inspiration struck, I needed to mount the mirrors on a small “plinth”. I cast around the garage looking for something that would be the right thickness as well as easy to cut & work. Wood was the obvious solution, though not very practical. Eventually My eyes came to rest on a lump of the old bonnet, the rear top edge, effectively a L section piece of GRP. 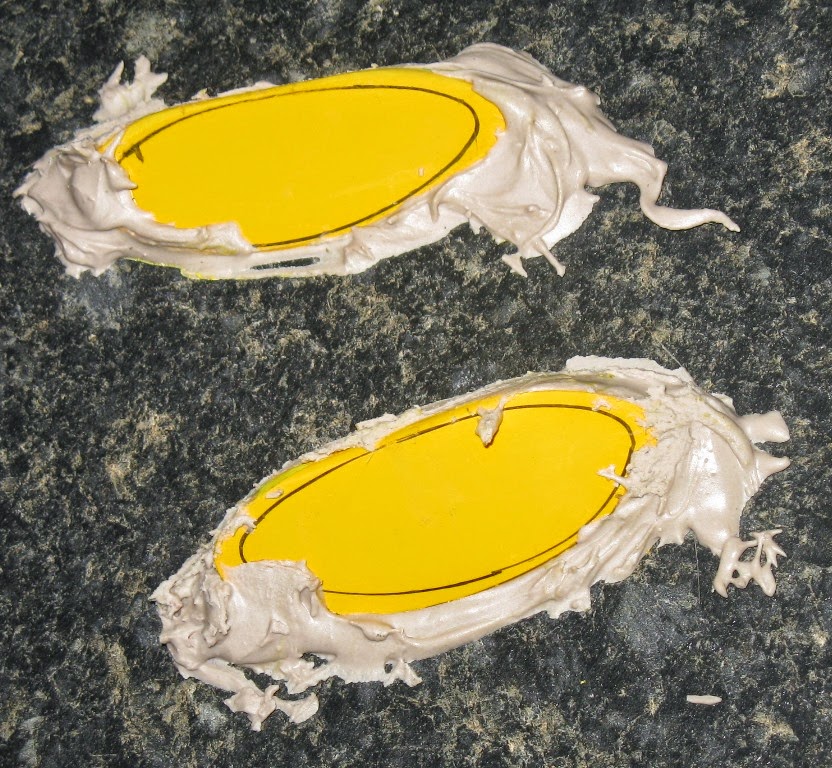 I found that if I cut the leg lengths of the angle just right I could have a plinth for the mirror that was vertical – this was much better as the deflector then swung nicely past the mirror edge when the door opened, also the mirror was higher to improve the vie over the rear wing & looked even more elegant. What didn’t look so elegant was the rough cut angle of GRP. Again casting round the garage I found some old car body filler, so I slapped a load of that inside the L & at both ends & placed it on an acetate sheet to get a flat rear face. 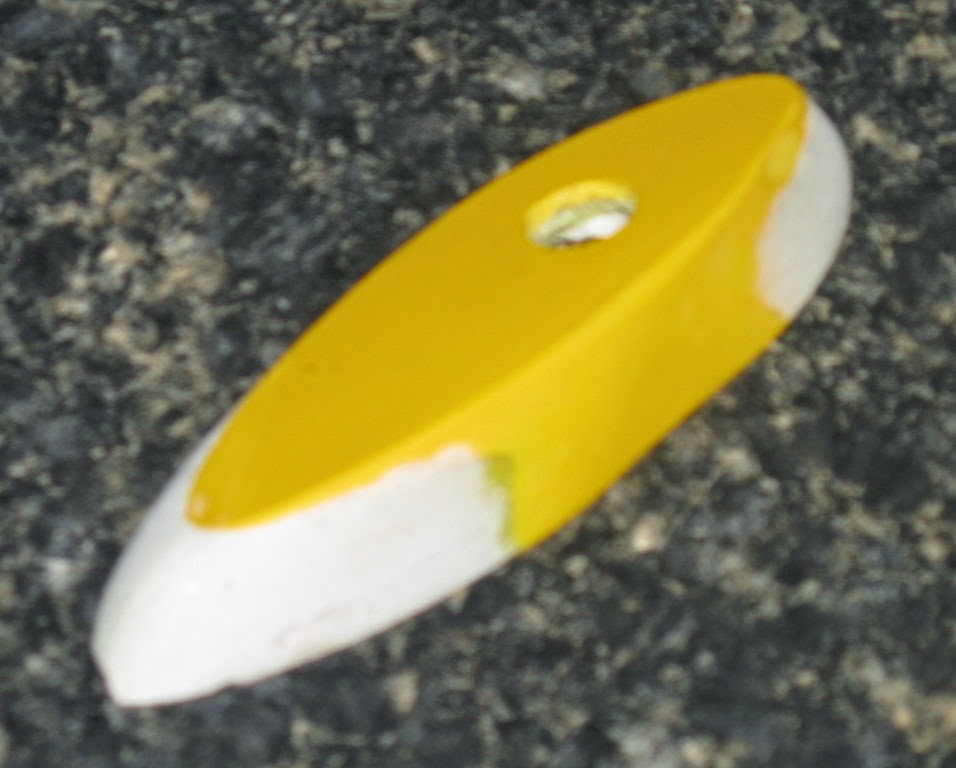 After some (quite a lot) sanding I had a pleasing shape with the strength of 5mm thick GRP. A coat of black paint & there you go. I think It’s a great improvement. 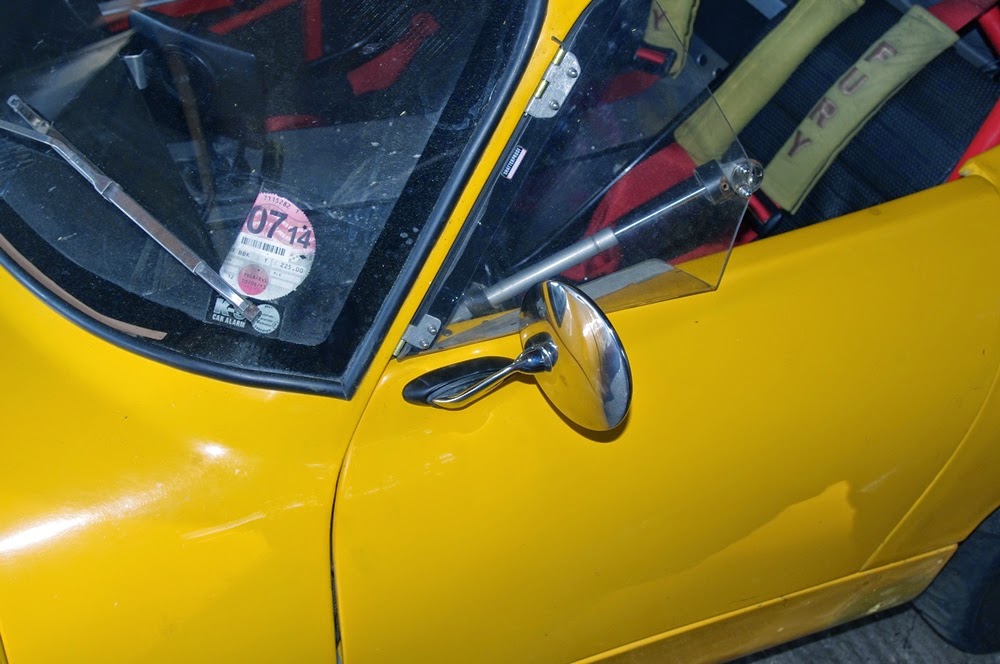 Posted by BlatterBeast at 20:32 No comments:

Once again it’s been a while since I posted any news – so what’s been happening?
Well – nothing sufficiently exciting to warrant a post obviously - but there are things afoot.


I’ve been looking for some time at extending the exhaust to the back of the car, getting past the wheel is the tricky part, but I think I have a route now after a lot of hours on the computer model, then of course I agonised for ages over the tail-pipe design. But again I think I have something. Not the cheapest or the lightest solutions you’ll be amazed to hear, but I like the look of it.
In the mean time the “battle Bus” Zafira had got a little more noisy. I’ve had “rear exhaust badly corroded” comments on the last FIVE MoT forms, but if it wasn’t leaking .........


So with the slight increase in noise & change in exhaust note I thought it had finally gone & put the back of the car on ramps & climbed underneath. I was right, the back box had gone – entirely. Can’t say when it came off & I hope it didn’t hit the car behind me whenever it was. Never heard a thump or a clang.
But back at the Fury, I contacted the Company that made the exhaust manifold (allegedly – I bought it second hand) for a quote, it came back at “£1000 because there’s a lot of work fitting it in such a tight area” – well I guess I’ll be finding out how much work it is then. I took off the side pod & the tail pipe, I retrieved a Westfield ZEi exhaust that’s been in “storage” on the shed roof for at least five years & set to work. One of the bends was a little crushed, but I sorted that to an acceptable standard with a little vice work, & set to with hacksaw & file. After maybe 2 hours I had all the tight area sorted & am just waiting for some mandrel bends to arrive in the post to finish it off. My welding is of course well up to it’s usual standard (utter crap) but good enough for an exhaust. I’ll tack weld the tail pipes together & get them professionally welded as they’ll be visible from the outside.


Then it was time to heal the 3” hole in the side pod. I chamfered off the edge of the hole on the outside, then cut some acetate sheet a little larger than the hole & duct-taped it on (to keep the outer profile), then made up some gel coat / resin / catalyst mix & prodded some surfacing tissue & chopped strand mat on the inside, a much larger piece of mat to hover the whole area & when cured took off the acetate, I’ll leave it to cure fully, but so far the shape is looking better than I’d hoped. The colour match isn’t brilliant, so I may need a sticker!
As well as all that I’ve ordered a new load of glass fluff for the silencer, so the car should be kinder to the neighbours in the future & as an added bonus, because the sound will be coming out the back, not the side it shouldn’t set off my wife’s car alarm when I drive past.
﻿﻿﻿﻿Also in the big box of shiny things will be a new speedo sender which attaches to the original speedo output on the gearbox. Hopefully this will work & I can get rid of the magnet wheel & sensor on the prop-shaft which has never worked well & often not worked at all (sigh).
Posted by BlatterBeast at 12:51 No comments: