Clearing Up The Jobs Backlog 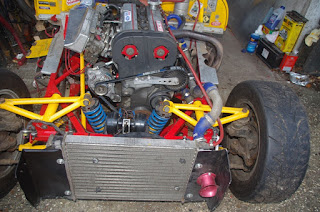 A number of worrying jobs had accumulated. Worrying in that they could be catastrophic if left forgotten, so this week I've put new nyloc nuts on the suspension bolts & torqued them, I've put oil in the engine (still needs coolant though) & that sort of thing. 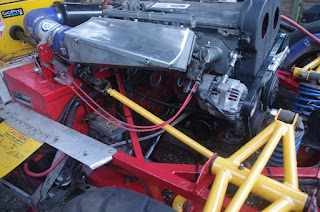 Today as it was dry for the first time in a couple of weeks I rolled the car out of the garage & assembled the clutch cable – always a faff, as you need two arms in the space of one, but I got there in the end & joy of joys, the pedal now needs about ½ the pressure it needed before with the Zetec clutch (for those that haven't kept up, the FWD Escort flywheel was re-drilled to take a Pinto clutch). This was one of the main aims of the stip-down so I’m very pleased.


I moved on to the throttle pedal & cables, first of all I drilled the pedals - well it's the sort of thing I just do, after a bit of Dremelling the throttle cable’s now working nicely, so it just needs the exhaust & some coolant & I could start it 😊. 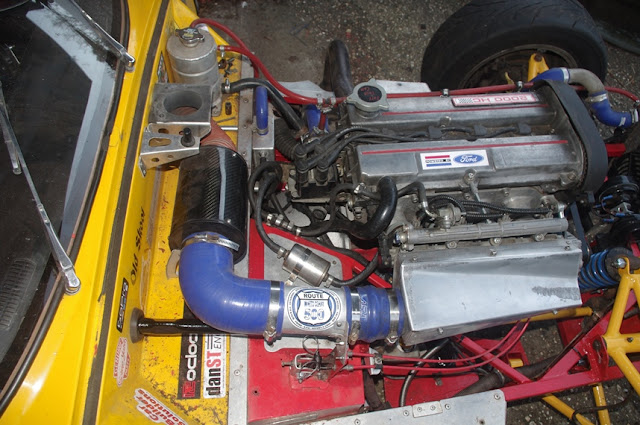 As a finale, I did a few jobs that’d been left, like tidying up the wiring under the airbox, putting the air feed pipe back on & tightening the alternator mounting bolt.
Major jobs still waiting:- 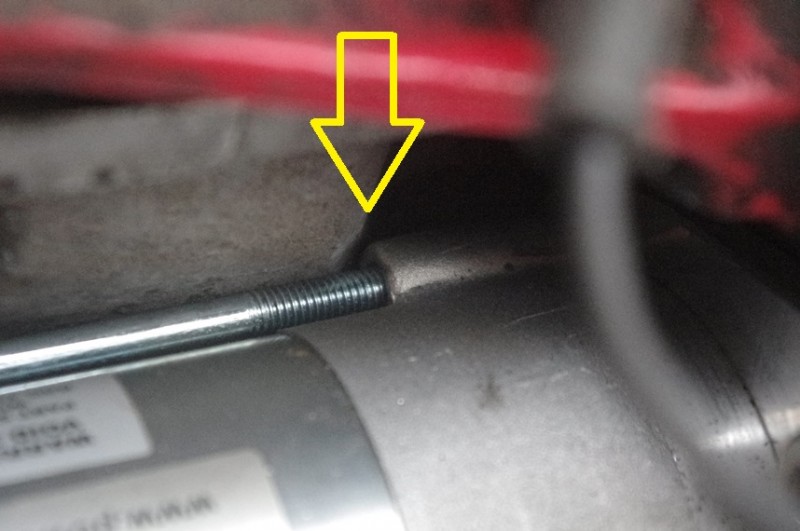 The starter is in. In the end it was nothing to do with the dirt plate. A fresh look showed that a lump on the sump was JUST stopping the starter fitting. Two minutes with the Dremel & it slid past the hump, straight into place.  So that's "a bit of a worry" dealt with. Pretty soon I'll wire in the battery & check it all works properly.

Staying in the same area, I took off the enormous oil separator tank & in 15 mins made a 4mm thick aluminium cover plate, at some point (soon) I'll put a take-off in it & lead a hose up to the tank. 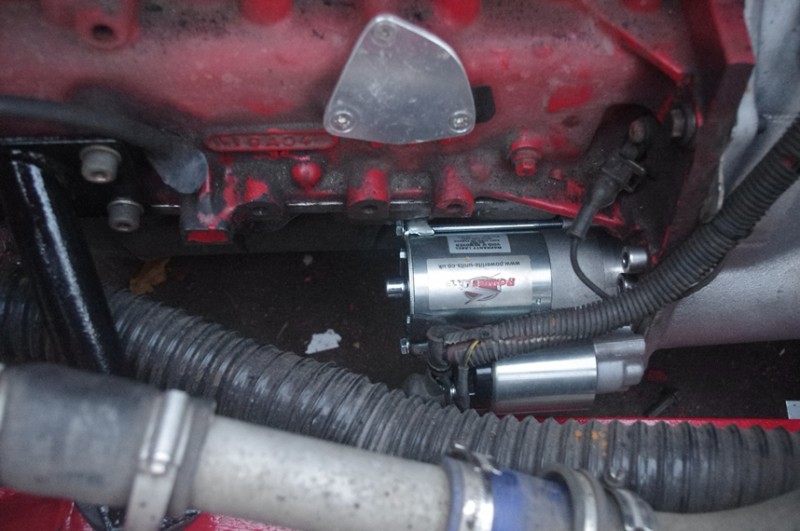 Then I did some plumbing & found out the hard way that the cheap Polo radiators don't have the small metal tube in the vent pipe to stop it breaking off - Ah - I'd go so far as to say ....... bugger.

So I looked round the garage & found some very thin wall titanium tube (as you do) & having scraped up the outer surface to provide a "key", araldited it in place - hopefully it'll be OK.
Posted by BlatterBeast at 18:27 No comments:

On The road To The Road

The Fury's on its' way back! yesterday I re-fitted the engine after fixing the wiring to the pedal box, drilling the pedal box beams & bolting them on properly, painting the engine mounts & drilling the chassis for the second Fisher mount & cutting some weight off it. So the car was dropped back on its’ wheels ready to be turned round in the garage & have the bonnet re-fitted. As I’ve fitted new engine mount rubbers, I’m hoping the bonnet will still fit over the engine – it’s pretty marginal.

After yesterday’s heavy labour, this morning I just turned the car round in the garage & did some pottering, tidying the engine bay mostly. I re-routed the radiator air bleed a little, re-routed the fuel lines so the follow a prettier & shorter route & I also removed the now redundant alternator drive belt pulley as the shorter belt is on order. Adding up the weight savings, I think the bellhousing saves 5kg, the starter another 2, the pulley shaves 250g, & the oil separator will save another kg. with the various pipe shortenings & wire re-routes saving on conduit & fittings, I think I’m pushing a 10kg loss which should pay for the belly pan & boot lid.
Posted by BlatterBeast at 13:20 No comments:

Today being a Friday I got into the garage early & made a start. Mrs Blatter wants the Fury bonnet out f the conservatory, so I need to put the engine back in the car, but first, I needed to put the belly pan brackets onto the chassis - at least those closest to the engine.

Some time ago - at my last employer I was handed a test piece - a sheet of aluminium with some 6inch louvres punched into it. This has now taken it's place under the pedal box & I've made a template for the other belly panels. 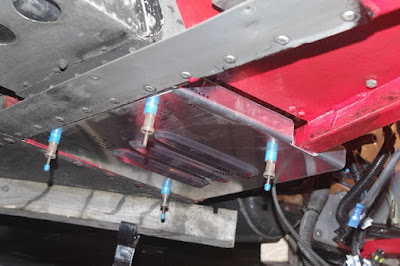 I found in my local nut & bolt emporium these link sealed pop rivets. Like normal pop rivets, but they form a seal when set, so no moisture gets into the chassis rails, I also wet-assembled them with polyurethane sealant to keep the moisture on the outside. So armed with them & the louvred panel I climbed under the car & this was the result.

Once the engine is in I'll be making the rest of the belly pan which will also be louvred to draw warm air from the engine bay.

It'll also look fantastic - a pity then that the only person who'll ever see it is the MoT man.
Posted by BlatterBeast at 22:21 No comments:

At the moment I'm trying to keep the momentum going by doing something to the car every day. 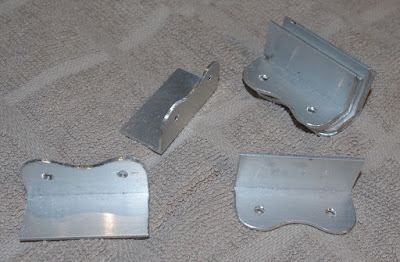 Some days it's a good thing, other days not a very interesting thing at all. Today was one of those days. I torqued the fly wheel on to the engine & loosely assembled the clutch, then set about making some brackets for the flat floor panel under the engine. It would be a quick simple job if I didn't insist on rounding all the corners & scalloping the straight edges in an aircraft stylee.

The other flanges will get shaped when they get drilled for the quick release fasteners (yawn). Only another ten or eleven to go.

Posted by BlatterBeast at 17:39 No comments:

Today I got the suspension back on the car, the bolts that needed wire locking were wire locked, the others are still loose - I can't tighten them  until the engine's back in & the weight's on the wheels, but the are brakes re-connected though not bled (must remember that bit).

Then I should've made up & fitted 15 or so angle brackets for the belly pan, what I actually did was look at the wiring. Some of it was a later addition for things like the spot & day running lights & was in separate conduits / tubes, so I spent a while (three hours!) re-running it all into the original tubing, & replacing sticky & peeling insulating tape with self amalgamating tape which while neither of those things make a huge difference to the car, it does tidy up the engine bay a bit.

That's two things off the to do list though.

Next weekend if time allows I'll:-
Torque up the flywheel bolts
Fit the clutch
Fit the wheels
Drop the car back onto its suspension
Fit the engine
Posted by BlatterBeast at 17:22 No comments: