It was quite a late start on Sunday. Not so much a blatt as a saunter down to Sussex for the "SKCC summer gathering" (yes, we know it's mid September). I rolled into Newlands Corner at about 07:50 & found a couple of members each with their new cars waiting. Shortly afterwards another arrived & when he'd finished re-surfacing the car park with a new high grip rubber coating we set off. 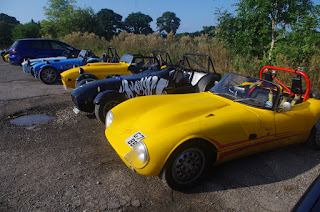 At this stage it was heavily overcast & the roads were still wet from overnight rain, but by the time we got to Bramley, they were dry - but then we turned off the main road & found the country lanes thereabouts were 4" deep in mud & shingle from the epic thunderstorm mid week & the place was alive with pheasants & grouse(s) none of which were in any hurry to get out of the way. 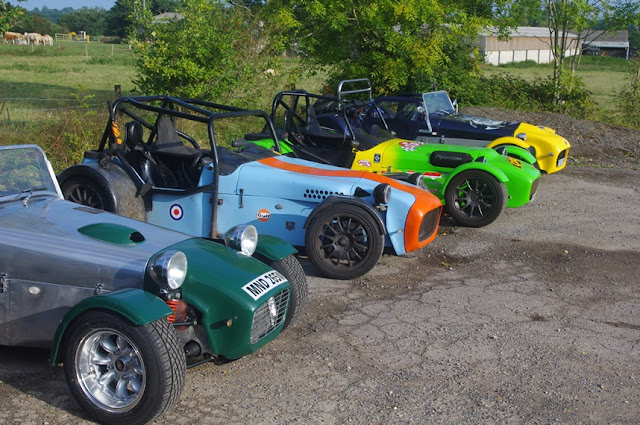 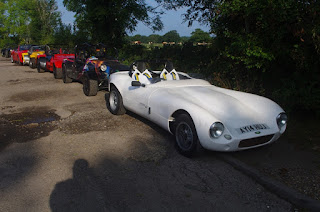 Breakfast eaten & new cars pored over & discussed (including one still carrying a pheasant wrapped round a front wishbone), we made a move, well most did, my starter was having none of it. Not a click, not a whirr, nothing. Hitting the starter button got nothing more than a slightly sore finger. 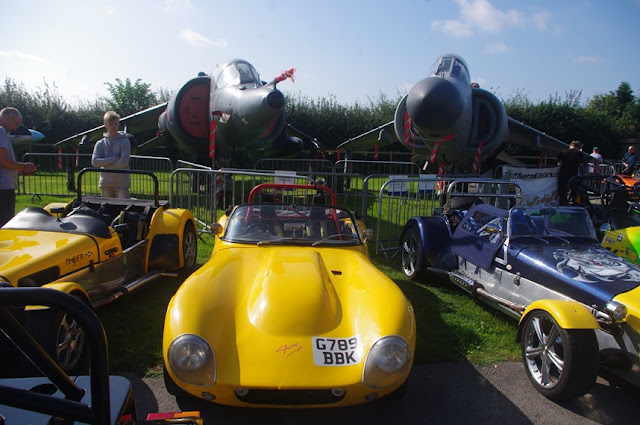 I was push started (thanks Steve) & headed out to catch up with the others & we all arrived at the museum together. We were marshalled into position in front of the outside aircraft by museum folk & the Fury ended up under the noses of their two Harriers - only right & proper really. 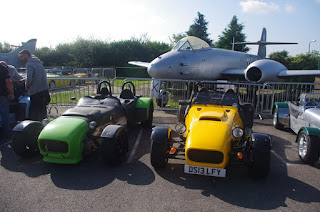 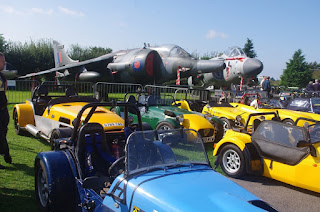 After walking around, I thought I'd better be getting back, so after a push start (thanks once again) I headed home.

Yesterday I sauntered out to the garage to give the car a hard stare.
Starter button showed 12v when it should've, wiring checked good, Starter had a good earth. Took the starter off the car, put it in the vice & wired it to a spare battery - no problems. This evening I've put
it back on the car & it's all fine. WTF??  :? 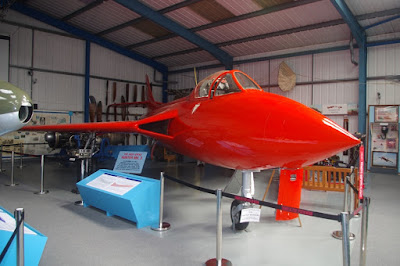 Posted by BlatterBeast at 18:16 No comments:

It's been a while since I posted on here, nothing much has happened to the car, but a fair bit has happened elsewhere. Mostly I've been made redundant (again - three times in five years). Well I was put "at risk" of redundancy, so rather than wait to see if it was good or bad news, I looked around & found a local aerospace company wanting a senior mechanical engineer & when I say local, I mean 1.2 miles across the common - so a marked difference to the 65miles I was travelling at the time. I sent a CV in on the Wednesday & was offered an interview the following Friday. I turned up in my suit, with the silk tie with aeroplanes on it that my wife bought me & the solid silver tie-bar wit a carnelian stone that I made myself - & was interviewed by a man in a baggy polo shirt, shorts & crocs! The second interview didn't seem to go as well, but I was offered the job & it was with great pleasure I handed in my notice, so from October I will be able to cycle to work.

We've also been on holiday to Northumberland - not perhaps the most obvious choice, but the county was beautiful & we stayed in a tower in Alnwick.

But back to the Fury -  for the past two weeks it's been my commuting car as daughter-the-younger has been insured on the tintop while she practices for her driving test, but these days I'm working at Farnborough, so there's not too many miles going on it.

Shortly the car will be coming off the road for a winter refresh, so expect more regular updates.
Posted by BlatterBeast at 19:34 No comments: