yesterday I covered 80ish miles in the Quantum & found another couple of issues - one of the poppers came off the soft top, the headlights are pointing at the road & sadly, the 3D printed throttle body mount isn't coping with the heat. I have two back up plans for that, one is to re-print it in ABS which copes with slightly higher temperatures, if that doesn't work I think I've worked out how to make something similar in aluminium - and as luck would have it, a suitable 5mm thick piece has been liberated from the Stylus where it was doing nothing more exciting than holding up the ECU. 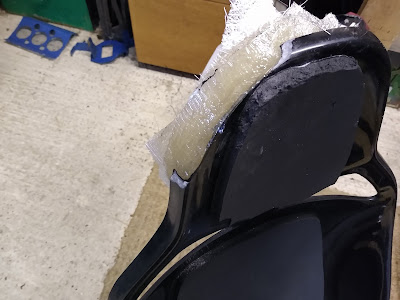 So apart from those little bits & bobs, today was all about the Stylus. I decided after getting downhearted the other day that the thing to do was to GET STUFF FINISHED. Job one was the driver's seat & making it fit with the roll bar. I kind of had two plans, re-shape the head restraint or cut it off & mount a restraint to the roll bar like I did with the Fury.

I cut the offending edge off, clamped an aluminium strip masked with gaffer tape to the new edge & glassed up a new flange. 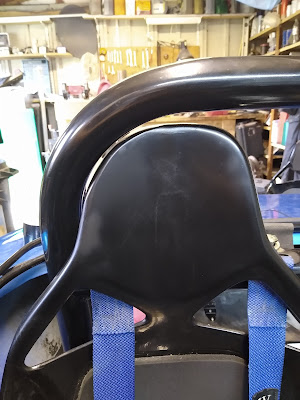 To my surprise it worked really well! With a little filler & some satin black paint it's invisibly mended.

In this photo you can see it's asymmetric, so the passenger seat will have to be done the same.

I also made brown paper pattern & cut & glued vinyl all around the back of both sides of the cockpit, thus doing away with the last of the flocking. HURRAH!! it looks a bit of a mess as it's just stage one, I need more vinyl to do stage two which will hide all the edges of stage one.

After that excitement it was back to the electrics - I have made good progress today though. I have done some general "housekeeping" for example a red permanent live behind the dash was bullet connected to an inch (I kid you not) of orange wire, then crimped to a much thinner black wire before disappearing into the fuse box. It now has a soldered joint, heat shrink & is red from one end to the other. Quite a few of the wires have been de-tangled & shortened, so all the wires going to the same component take the same route - it was a little like a cat's cradle before & finally the electric water pump (which still might go - not decided yet) now has all the wires taken from sensible places, taking sensible routes & are wrapped together & clipped up to structure. Tomorrow I want to do the same to the wiper motor loom.

Then, over the next couple of days parcels should start arriving. stuff from the excellent Car Builder Solutions to make a new dash & waffer theen aluminium sheet to make a floor under the dash to support all the wiring & stop passengers getting tangled in it.

I WILL get this car back on the road!