Ready For The Road trip (ish)

After yesterday's efforts the Quantum is ready for the Welsh road trip in September. 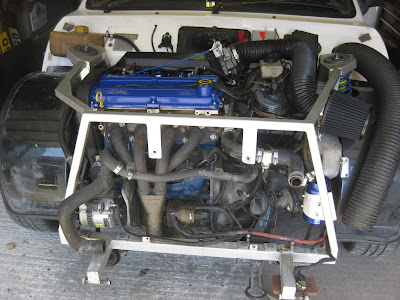 After moving all the cars around on the drive, I put the Q in the garage & changed the aluminium bottle "catch tank" for the one that came with the Stylus. Two reasons for this, the first being that it weighs almost a kg so I don't want it on the light car, the second being that it's blue. The tank itself is held on by M6 threads cut into the side walls (which are about 8mm thick, hence the weight), so the bracket had to wrap around the body - which I was quite pleased when I managed to make it do. 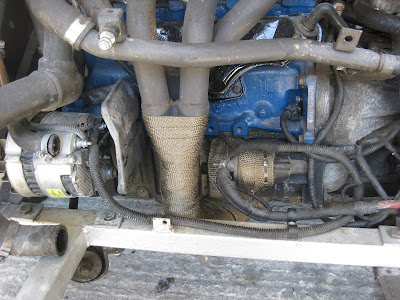 On to the things I actually needed to achieve. The big job was to wrap the exhaust in heat insulating tape. I've never liked the stuff myself, the idea is to lower the engine bay temperature so the air entering the engine is cooler & so more dense, but I've heard a lot of horror stories about manifolds cracking at the welds because of the increased heat stress / expansion & it's a particularly bad idea on Jeremy Phillips' full bodied designs as the exhaust runs through the bodywork. Insulate the manifold & all the heat it can't dump in the engine bay moves downstream to the pipes through fibreglass - where you REALLY don't want it. But all I was doing was protecting the starter motor on the Quantum so this was just going to be a partial wrap. Job one take off the bonnet, job two drain & remove the radiator (cursing front wheel drive under my breath), then I wrapped from under the sump, up past the starter as far as the two primary collectors, there's only one weld covered & it's a sleeved butt-join in the pipes so should be OK as there's no differential expansion going on there. Then I partially wrapped the starter, didn't see the point in heavily wrapping it as it picks up a lot of it's heat from being bolted to the engine & I want it to be able to cool from that. Then with the remaining tape, I added another layer over the twin down pipes, mostly as protection for the first layer.

Through all this I was wearing proper industrial gloves, but I still itched like mad that evening.

So, re-fit & re-fill the radiator, re-fit the flip front & it was all done except for the shorter alternator belt to keep the pulley from rubbing the sub-frame - which arrived in the post in the afternoon.

By this time it was properly scorchio outside - in the 30s again. But when it had cooled off a bit after tea, I fitted the belt & took it out, yes, it's a lot nippier than before & seems all very quiet & smooth. The steering & gearchange are still horrible, but I've never really done anything about them.

I also got some hours in on the Stylus which turned out to be all very frustrating. I have found out why the seats were never fitted properly - it because they don't fit! With the roll bar in place the seats win't go back far enough to drive comfortably. So now I have a bit of a quandary on my hands. I could trim the seats to fit through the roll bar, but that would affect the strength of the head restraint (I may well only be here writing this because the fury's head restraint worked), or I could buy different seats & move the buckets to the Quantum as the Peugeot seats in that are so heavy I can barely lift them, but doing that will cost the thick end of £1k.

It's a tricky one.