I think the electrical problem with the ECU is solved. The first problem was that - yes - I'd misinterpreted the wiring diagram, my fault, but in my defence the power wire to the ECU is red & in every car I've ever worked on red is permanent live, but hey-ho. The next problemette was that I'd connected the wire to the master switch in the engine bay, so had to dismantle that to get it out. Of course I now have a LARGE stock of wire to choose from when looking for a new piece to connect it up with & found just the thing.

While wandering round the garage I spied a couple of unused fuse boxes & decided the best course of action was instead of tacking wires onto some other existing branch, fit a new fuse box. The existing relay that controls the injectors, Idle Speed Control Valve etc had an in-line fuse - I don't like in-line fuses, I worry I won't think to look for it at the road side when the car's died. So with a little re-wiring I re-routed the supply to those things through the new fuse box at one end & installed a switched live supply at the other, each with an unused "way" for future growth & wired it all back up. It worked! -OK, I think it worked. Pretty certain really.

Next job, sort out the alternator pulley. On the way to the Rolling Road there had been a nasty grinding / rotating sound when pulling away in first, on the way home this had vanished - but was replaced by the shrieking of a drive belt. Chris-the-mapper had pointed out that the alternator pulley was rubbing the engine sub-frame & now I came to look at is more closely the belt was now loose - the alternator had been pushed back as the engine moved forward under load. 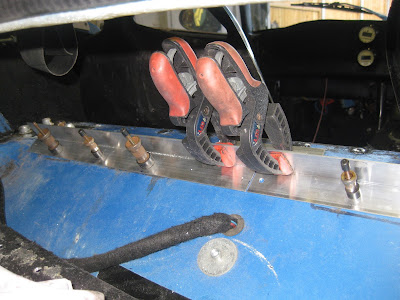 That was about as far as I could get with the Quantum, so my attention turned to Stylus. The roll bar is still at the powder-coaters, so I looked at the aluminium paneling around it. I've been impressed by the build quality the original builder achieved, but I guess sheet metalwork was not his thing. Some aluminum angle I'd ordered to replace bent-up sheet angles had arrived so I transferred the holes in the boot floor into it, cut it to length & jig-pinned it in position so I could look at re-fitting the panels around the roll bar legs. The holes in the sheets are a bit "all over the place", but I drilled them off & spaced some new ones. I don't like having this sort of thing permanently attached, so it'll be held on with bolts & riv-nuts. 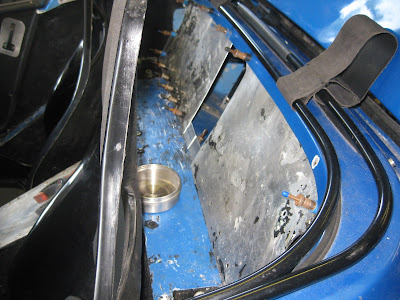 It would be nice to have these panels in bare aluminium ( I do like a bit of bare aluminium paneling), but by the time I'd scraped off the flocking, the surface was all scratched to hell so I don't think that's going to be possible. Also, the join between the panels wasn't central - this isn't a problem because I need a couple of power outlets in the rear panel & they're very thin aluminium, so I've shortened them & I'll make a thicker piece to join them up & mount the power outlets.

But it is nice to be working with all the old sheet metal tools again.