A Tale Of Two Bars 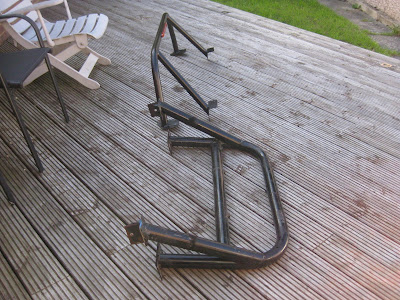 Roll bars in this case. It's a strange thing that both the kits have roll bars with very poor surfaces, the Quantum's had been kicking around the manufcturer's yard for some time when I bought it, so that's understandable. But the Stylus' is lumpy & 1/2 repainted & it was covered in stickers - some of which had been sprayed over. So today I took the roll bar off the Quantum, cleaned it all up, gave it a coat of satin black & ..... then took the roll bar off the Stylus. This was a much more involved job with the bolts going through the chassis to the underside of the car & the rear wall of the cockpit having to be dismantled to get it out. But out it is & tomorrow I shall enquire about getting it sand blasted & powder coated. 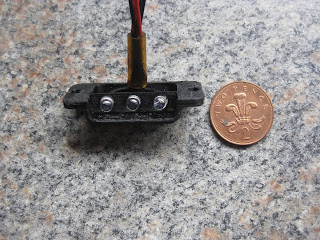 Also on the jobs list for today, was a number plate light. I have a thing about kit car tail lights, so many seem to have had no consideration given to shape or size & some look like they were thown at the car & screwed on where they hit. Fortunately my Stylus did have some thought applied & it has Fiat Coupe lamp units which suit it perfectly. But the No. plate lamp is the usual "classic car" job as fitted to myriad Leylands from the 50s to the 2010s on Land Rovers.

On the Fury I sunk the No. plate into the rear panel, put a Peugeot 206 rear fog lamp either side & a discreet LED lamp in the overhang thus created. It was a lot of work, but I thoght it looked really rather good (other opinions are available) but it wasn't going to work on the Stylus. I bought a pair of cheap light bolts, but they were disapointingly large, then while wandering in the garage I happened upon some 5mm white LEDs I bought for the panel lights in the Quantum, drew up a simple housing that would fit under the boot lip & printed it. So like the Fury, the Stylus should have no visible plate lamp.