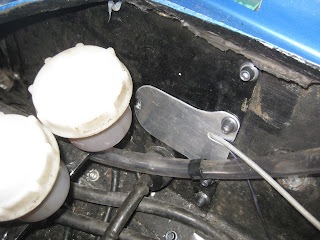 Next thing next, started looking in more depth at the Stylus today, there were some cables going into the firewall with the hole just plugged with duct tape, so while replacing the bolts with titanium ones - as you do - I made up an aluminium cover plate.

As the big box of titanium bolts was out I replaced the bonnet & boot hinge bolts & turned the boot stay the other way round so gravity holds it locked & the boot supported - as it was the slightest puff of wind raised the lid slightly, the stay unlocked & the boot lid fell on you head - trust me on this!

Then my brother popped round to see the car & while grovelling about under it I found one of the rear axle oil seals is weeping, I shall change them both once I've borrowed a slide hammer. 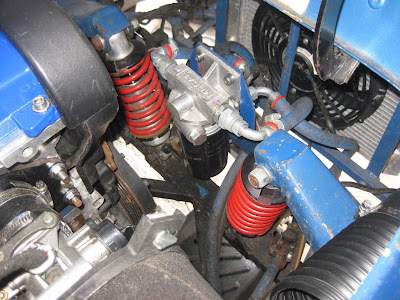 I then set about tidying the nose up, there was an oil cooler it might have needed when it was supercharged, it didn't need it now & it hung below the radiator so after a graet deal of trouble with fittings (all of witch loosened at the adaptor joint, not the connector joint makng it impossible to remove them) I eventually removed the cooler, the remote oil filter, the oil-stat & pump adaptor & all the piping - removing 2 1/2 kg as well as the likelyhood of tearing the oil cooler off on a drain cover. 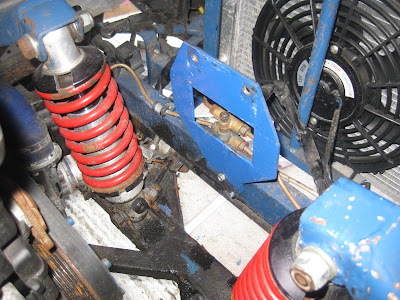 Bit of a dodgy bracket this one, quite "leggy", with a heavy thing on it & held only at the bottom by a 5mm self tapper & one M6 bolt which also attached two brake unions, so it it came adrift it would take the brakes with it - having said that, it never happened, so I guess it was OK 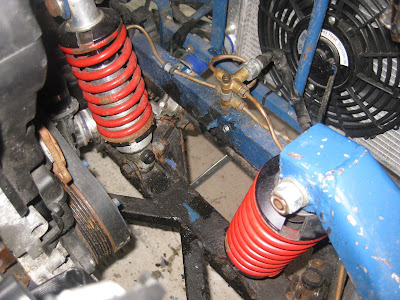 The underseal is peeling & there's some rust underneath - nothing serious, but a job for another day.