MoT Day – And A Rant

Took the Quantum along for it’s MoT bright & early this morning, I was expecting it to fail on handbrake efficiency as the handbrake seems to be PANTS, but no, then maybe the seatbelts being very sluggish to retract? No!

What it did fail on? - & here we have the subject of the rant – split boots on both the near side steering ball joint & the suspension arm ball joint. The chap was of course quite correct, both were mashed & he’d noted it on the fail chit, but the computerised system assigns levels of seriousness to the observations:-

So a wear problem with a major safety critical suspension component & brakes not working properly are just advisory, but a hole in a rubber boot is too dangerous to use the car on the road?? That’s madness surely? Granted the boot needs fixing, but it will never cause a crash – it will directly lead to an issue that will cause a car to be unsafe, but apparently that issue (play in the ball joint) is only worth an advisory!

We live in strange times.

Anyway. I got the car home & ordered the parts, then thought I may as well start, so I put it up on stands & took the front wheels off for the first time. First thing I notice is the brake lines passing through a sharp edged steel hole on the strut leg. There should be a guide or grommet to protect it, but no. No mention of that on the MoT then?

Then when I disconnected the steering & moved the strut I realised the spring is staying still when I rotate the stut – as is the upper of the ride height lock nuts, the lower one is rotating with the strut, so when I’ve been turning the steering wheel the nearside spring has been pivoting on a screw thread – how long before that would’ve worn through? Again, no mention on the MoT because there isn’t a tick-box for that sort of thing.

On the upside I found the suspension arms have powerflex polybushes, so the arms came off the car, were given a good clean with rotary wire brushes & received a coat of paint before re-assembly. The whole front subframe needs a good de-rust & coat of paint sometime soon, but that wasn’t a job for today. Tomorrow the new parts should arrive, get re-fitted & then it’s back to the garage - on a trailer obviously – the note on the fail cert says that because of a hole in a rubber boot, I can’t use it on a public road until it has an MoT – THERE’s the critical thing – not until it’s repaired - until it has an MoT.

So I can find a basket case parked in the open that hasn’t turned a wheel in 20 years & without tax or MoT I can legally drive it to a “place of testing or repair”, but a hole in a rubber boot condemns the car. 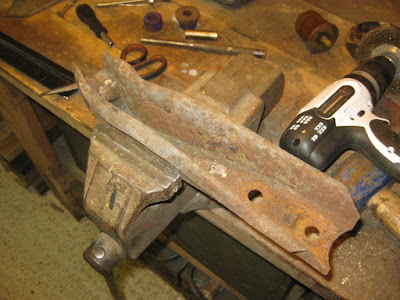 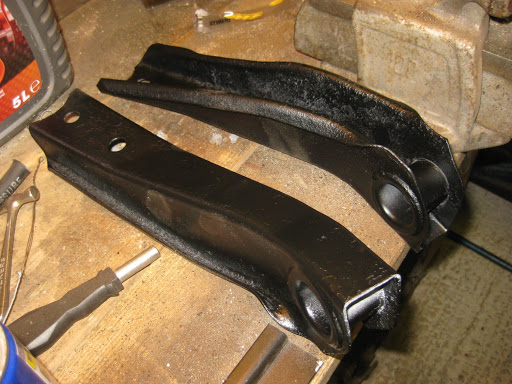 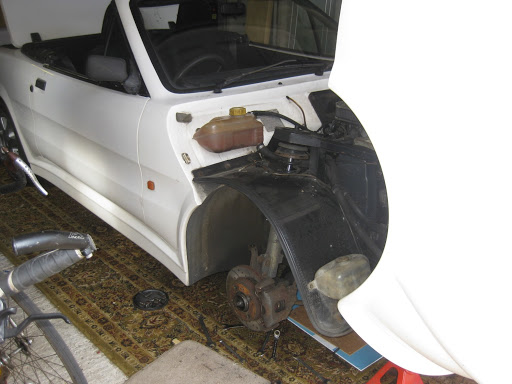 Didn't take long for the wheels to come off..... 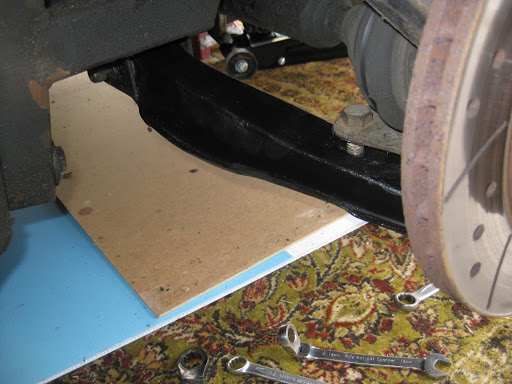 Shiny (OK matt black, but not rusty anymore)
Posted by BlatterBeast at 17:08