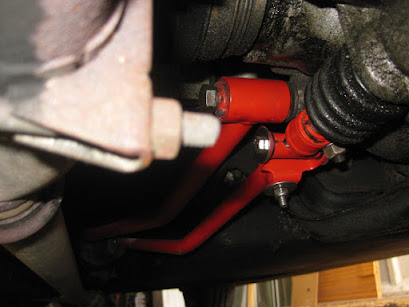 Yesterday’s jobs on the “Q” as it has become known, were to install the gearshift bushes & take out the toe in on the front wheels. Fitting the bushes was easy enough I had dispensed with the M8 bolts through the UJ & instead put a tube through which was 8mm O/D & 6mm I/D with an M6 bolt, carefully cutting the tube to length & fitting penny washers on the outside meant the bushed are just gripped, so there is no play in the joint at all. The gearshift is now much more positive.

Sighting along the front wheels to the back ones confirmed the car had some toe-in – should be parallel according to the build manual, so I lined the steering wheel up & adjusted the off-side wheel which seemed to be the one that was askew. I’ll have it set up properly.

Then I moved the “oil separator for the rockerbox breather & it came apart in my hand AND had a teaspoon of oil in the bottom. It had a pipe to drain to the inlet manifold, but clearly wasn’t. The union on the inlet is the usual aluminium type that I have never successfully removed – they usually crumble & leave me with a big problem, but this one undid! Hoorah!

It was completely blocked with crud – I had to drill it out! But I now had the problem of not being able to connect the inlet to the rockerbox. As a temporary fix I joined the inlet union’s two pipes together with some hose & fitted a catch tank that had been on the Rickman many years ago & plumbed the rockerbox to that. I also did some more re-routing of wires & pipes to stop things rubbing, stop things being tangled & stop things getting in my way.

So another good morning’s fettling & the car is starting to improve.