Up with the lark & out on the Quantum’s inaugural blatt, From the Shell garage on the A24 to the Chalet café.

First surprise was that it was all Elises (OK, Robert was in a Fiesta). Having filled up the tank & borrowed GBs spare satnav with the route on, I attempted to set myself up. First problem was the sucker on the satnav wouldn’t work, then I had to shift my mind back to when I had a TomTom XXL to remember how to work it. I got it balanced on the dash in a satisfactory manner as the first Elises were leaving. I had no intention of getting in amongst them, so waited for them to pass. Then I couldn’t get the satnav to update, so I followed the last Elise – who was having a similar issue, so pulled over. When we set off again the Satnav tried to take me back to the start (sigh).

So after deleting they first waypoint, I did the first half of the run alone, which was fine, just feeling the car & slowly pushing it a little harder. It really seems to be “coming back to life” now, the suspension is working well & the engine seems a bit more willing, I think the second choke on the carb is now working - but it's hard to be sure.

But I pottered along at 40 & 50 wondering if I’d get to the half way loo stop before they’d set off again when the radio crackled into life with something that sounded like “is that you?” Looking in the mirror revealed a chain of five Elises behind me. I picked up the radio & suggested they might like to consider an engine swap to a 1.4CVH if they were having trouble keeping up.

After the loo stop, I again let the Lotii go first, but this time did kept up, by now the traffic had increased & it was easier to keep them in sight, though there were a few fast corners & roundbouts where I pushed the Q & it was not found wanting – obviously straight line acceleration was another matter.

So there we are, first Blatt successfully accomplished, no drama, no coming home on a flatbed, just some testing, good fun, good company & 34mpg. 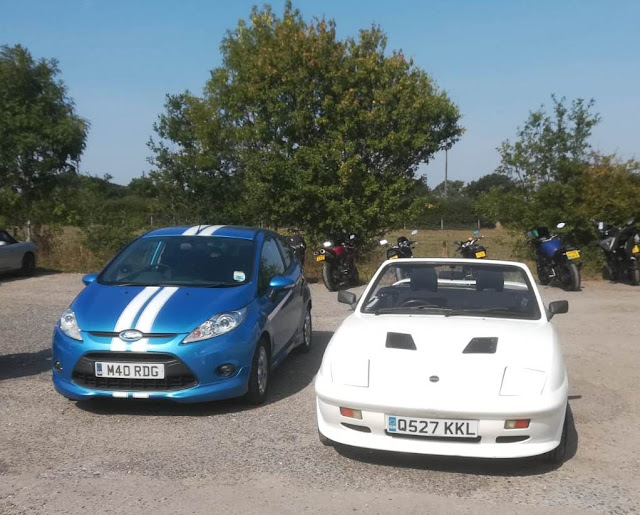