Bank Holiday Weekend & I've spent the great majority of it in the garage - Hoorah! 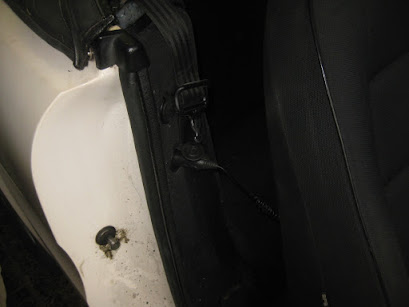 So what have I achieved? As previosly reported, I've mounted the roll bar & fitted a high level brake light, since then I've had the rear brakes in bits to see if a non-adjusting self-adjuster was the cause of the vague pedal, but no luck, done a load more bit's & bobs that I've already forgotten about & yesterday I started by fitting power points behind the driver's door for the radio (walkie-talkie) & a roll bar mounted camera - note to self - get a camera roll bar mount. Today in an attempt to improve the brake "feel" & get the clutch bite point out of the carpet pile, I took the whole pedal box out of the car. Sadly there were no obvious faults apart from the brake push-bar that links the pedal too the actuator. Whoever built the car cut it off too short & omitted a lock nut, so it's served 20 years wearing out the mere 3 1/2 threads it was attached by. A trip to Margnor tomorrow I think.

But before all that I bled the brakes, no air came from the back, so the slave cylider replacement was done properly, but the nipples on the front calipers were both seized, but yielded a little air & quite a lot of dirt when I got them freed, testing showed brakes that felt like brakes - which was nice. 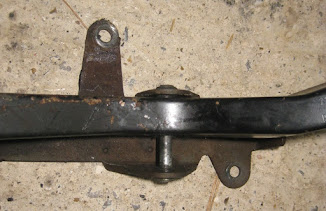 While I was in the driver's foot well,  I stopped the accelerator pedal sliding side to side as that was a bit pants too, There's photos of the pedal slid to the left & right - which Blogger has seen fit to rotate so it's top & bottom. 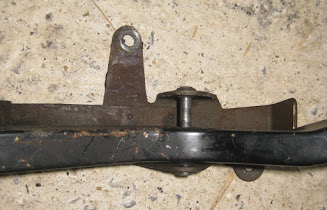 But the big news is the clutch. I have thought & considered, mulled & even cogitated what to do with the clutch. The trouble is as soon as I changed anything, the auto-adjust re-set it to how it was before - in the carpet, this is a known thing on 2+2s & there is a section in the build manual on how to fix it - I did that - cost me £25 - it didn't work.

With the pedals out of the car I saw the clutch pedal trvelled a little less than the brake pedal before it hit it's stop, so I cut some of the stop away - only about 1/8" (3.25mm for millenials) but the business end of the pedal is some way away, so it multiplys. So that inceased the amount of travel & I put the pedal box back in the car with a couple of penny washers between the lower two feet & the bulkhead, again it's a very small distance, but it tips the pedal box so the pedals are further from the bulkhead and......... the cluch bites about an inch - 1.5 inches away from the floor, making the gear change much much nicer & while it would be pushing it to say the car is now a joy to drive, it's a world away from wrestling it down the road when I picked it up.

I still have another couple of jobs to do.

But it's nearly ready for it's first big adventure, the RogueRunners Welsh trip 2020!

There's a photo here of the second lot of wire I've removed from the car. 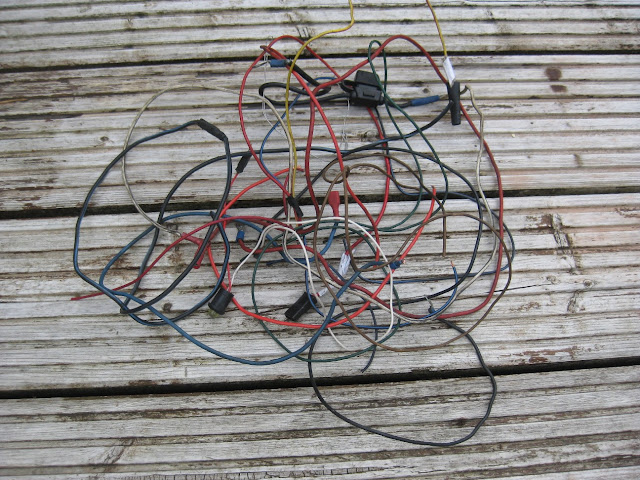