For a reason I've never understood, Day 4 of a road trip always seems to be the best day & so it proved again this time. However - there's a thing to be said first:- It was the day of the Queen's funeral, should we be having fun? It was a question that went round the Rogues as soon as the date was announced. Some wanted to watch the ceremony (which was, it has to be said - spectacular), so contacted the inn & asked if they could watch it there. That was no problem, so the route was re-written into three routes, short, medium & long & people chose. Brian, Linda & myself chose the full fat version on the basis that honouring the regent of a free (ish) country by doing something that celebrates a country being free wasn't a bad thing. As ever with the Rogues we each took the path that suited.

So, a group of us set off from the Roast Ox & headed out of town. After about a two miles there was a call over the radio:-

"My SatNav said left there"

"mine said straight on"

"what route are you on?" 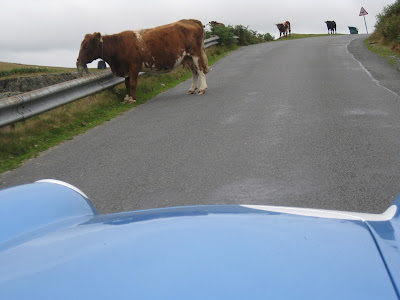 And so it was that three of us sallied forth towards the Elan Valley, but as we approached the good stuff, suddenly - WHOA! COWS!

About two dozen head of cattle with very large bells round their necks had got themselves onto the road where the armco was, so couldn't get over it & couldn't work out that they needed to walk back to where they'd been to walk round it. One or two bellowed at me as I approached.

Having circumnavigated the prime beef, we headed off up the valley, I flagged down a couple of old ladies in a Golf to warn them as they would've approached the herd round a blind corner, then we lit the after-burners. 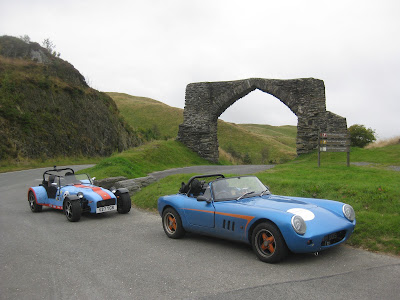 We got a completely clear run along the Elan valley & stopped towards the far end for photos by "the arch". There didn't seem to be a good reason for "the arch" other than to commemorate the Jubilee of George III, reason enough I suppose, but why an arch in the middle of nowhere? It made a nice backdrop to the cars anyway. 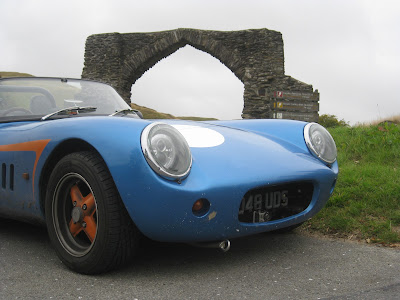 After that we dropped into the Devil's bridge cafe again for coffee & cake (yes again - what of it?). this time there were no musicians & even the wasps were few & far between. 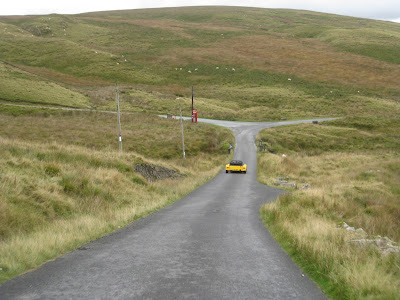 Refreshed we walked back to the cars which were being admired by a Belgian (possibly Dutchman). We set off once again & in almost no time were on the Lake Brianne road, but a call over the radio brought us all to a halt. The cycle wing that was partially severed yesterday had now detached properly. This was a good thing really, had it detached in one go it would've flown off the car & in all likelihood scraped down the road at best, at worst it would've gone under the rear wheel. In the event the self amalgamating tape held it long enough for the car to come to rest & it was placed in the car with no harm done - result! 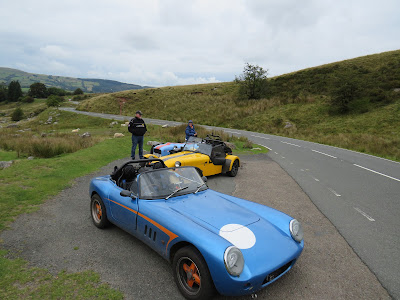 After a clear run along the spectacular Lake Brianne road we headed south & I realised we were approaching the Black Mountain road - BRILLIANT. But sadly it was not to be. On the wiggly approach road we came up behind a car that was clearly not in a hurry, managing 35 in the 50 limit road. In an attempt to gain some clear tarmac we pulled into the nice little lay-bay at the foot of the mountain, for another photo opportunity.

After a few minutes snapping away, we mounted up - just as another car came past. I gave it as long as I could (there was other traffic coming) & then headed up, but as we approached the hairpin there was a bunch of yoof loitering on the apex & an M3 came round the bend sideways & carried on sideways until a small turn off. I let the car ahead go round the bend & accelerated, but the moment was spoiled. We stopped again in the upper car park where more yoof were herding while front-wheel-drive hatchbacks screamed up & down. Not really surprising they put a 40 limit on the road if that's what the locals do. 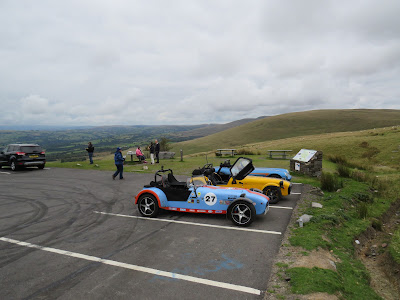 We did at least get a more or less clear run down the other side which is another fantastic road - no hairpins though.

About now we got an apologetic Whatsapp from our illustrious leader saying he'd arrived at the hotel & was very very sorry. "Ah" we thought "that good eh?", we set off. The rest of the route was mostly empty winding A roads, very satisfying to drive, but I couldn't tell you where we were. I did once see a sign to Bala, so I guess we went somewhere near the Evo Triangle. I do remember coming off a roundabout & finding the road went up quite a long steep hill in three lanes (one down, two up) & as I accelerated up a mile or so of absolutely empty, wide smooth tarmac I though "this is going to go down to two lanes & there'll be someone doing 35 just after it does. Which was EXACTLY what happened, the moment it was down to two lanes there was a grey Volvo in front doing 35 - 40 & either double white lines OR traffic coming the other way - for five painful miles!

The hotel - hmm - what can I say? The hotel was actually very nice, much nicer inside than the first night's hotel, it was a bit of a mish-mash of styles with a 1980s outside, almost Victorian corridors & modern bedrooms, but it was set in the middle of a vaguely dodgy looking estate & the clientele looked very much like they'd called in for a swift 8 pints on their way home from the match.

HOWEVER, they were all perfectly well behaved & actually left pretty early in the evening - by 9:00 we had the place to ourselves (we were watching Paddington Bear on the TV - ROCK & ROLL!). A cynic might suggest the terms of their parole meant they had to be home early, but you wouldn't catch me making such wild assumptions.

So really that was pretty much it. tomorrow would see us heading east & splitting up to head home. But day four had been very very good.