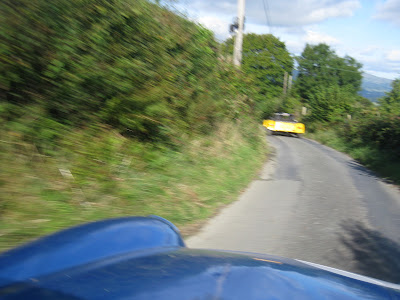 It was cold & autumnal when we set off, heading for the mountains, but the forecast was good & so it turned out to be. After some very good roads we arrived at the excellent Ffestiniog railway café for coffee & cake just in time to join the queue before the train full of passengers puffed in & the queue got a lot longer. 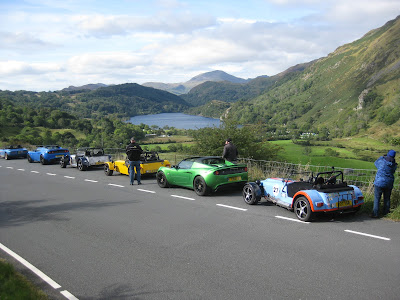 After negotiating the exit – it’s an oblique junction & can be a problem for cars with less steering lock than the Stylus (round in one 👍) – we wended our way over the moors stopping for an occasional photo opportunity before arriving in to Harlech, an early example of military stealth technology as at least one of our number completely failed to see the enormous stone thing, just off the road. After a refuel we headed south to Barmouth, where we re-fueled opposite the "all Wales & North Wales Sausage Champion"  before turning inland. The roads were excellent, but one or two were marred by folk driving at half the posted speed limit & not in a way that allowed overtaking. Go slowly if you want to, but don’t obstruct others. 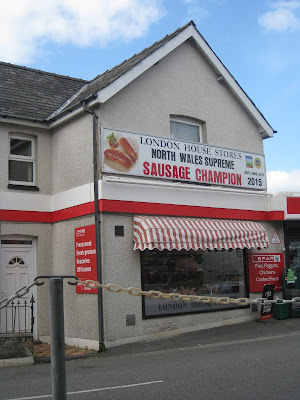 Then suddenly were were at the equally excellent Conwy Falls café for more coffee & cake. I ordered the Victoria sponge & went & sat with the others. After some time a perplexed young waitress appeared saying “I was told this was for the man with the hat?” we looked round & all of us had hats.

After that it was back to the hotel along some more fantastic roads, almost free of traffic, there was a little, but we also had 20 mile stretches with nothing ahead of us at all.