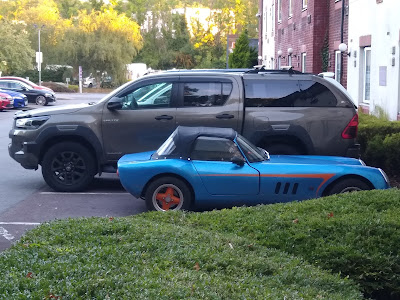 The last car arrived for breakfast after a very early start & after all getting reacquainted & ensuring everyone was up to speed with the latest banter, we set off - after I'd found my car.

Getting out of Newport was a trial by traffic, average speed camera & humps, but we broke free & found a lane. Now the route writer had been under strict instructions to NOT put green lanes in, two of those most opposed to the narrower roads had checked the routes & still one slipped though. I sat in the Stylus laughing like a drain.

Next was some dual carriageway – part of the "Heads of the Valleys" road & therefore a building site with a 40 limit & a traffic jam. Then the next road was blocked by an accident & we had to re-trace our steps, which split us all up. After some radio chatter, some of us pulled onto a side road to re-group, I saw a couple of the others & ran towards them like a man possessed waving my arms but wasn't heard - "because Whitesnake".

After that it got better. 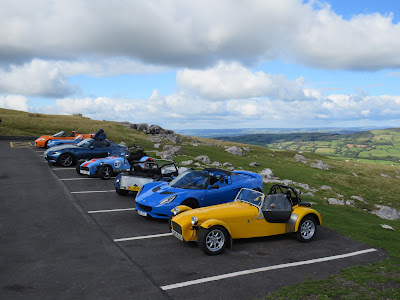 We had a clear run up  & down the Black Mountain road stopping at the top for a group photo, in fact we all re-grouped there so had a proper group photo (just the cars obviously) for the first time ever. We then  did the Elan Valley & the Lake Brienne road – every bit as epic as last year when we discovered it & both of them almost traffic free. EPIC!!

We had coffee & cake (some had real food) at the Two Hoots biker café – were we are tolerated because of our inadequate weather protection & by & by we arrived at our hotel, wrapped up the cars (those with production cars merely locked them) & went in for some tea. New hotels this year (our choice not theirs I hasten to add), the Beaufort Park Hotel was "a little tired", but the food was good & the staff were helpful & friendly. Though by this time we had driven on minor roads from the south coast, to very nearly the north coast so anywhere with a bed & beer was wonderful.