I'd hardly slept at all having had FAR too much to eat the evening before. I remember it began with two of our party turning the wrong way at the first set of lights – less than 10 yards from the hotel - this often happens as the SatNav's haven't sorted themselves out in time for the first junction.

I can also remember a certain amount of banter about one of us not seeing Harlech Castle – like “hey Neil, can you see this pub on the left?” “What, THE CASTL ….. yes, yes I can see the pub” 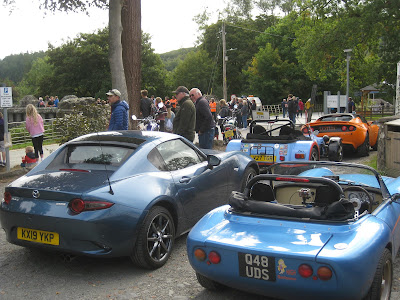 One of our first destinations was Lake Vyrnwy - where one of my first road trips had come to grief on a corner I hadn't anticipated & the Fury went home on a lorry. On this occasion there was clearly something going on. "Something" turned out to be 1,200 people running around the lake - I'm led to believe this was a choice they'd made, though I find that difficult to believe.
Initially all went well, we couldn't turn across the dam, but the SatNavs sorted themselves out & redirected up the other way round the lake, but on arriving back at the dam from the other direction we were told we couldn't cross because the 1,200 mad people were due & would take 1/2 hour to come through.

And cross they did, some of them immensely fit looking, cruising easily as we were only about a mile from the start. Others - erm - less so. After a while we were allowed to cross the dam, thinking we were all clear, but NO! On the far side of the dam was a lollypop man who insisted that every last car from the other direction went before us (sigh). 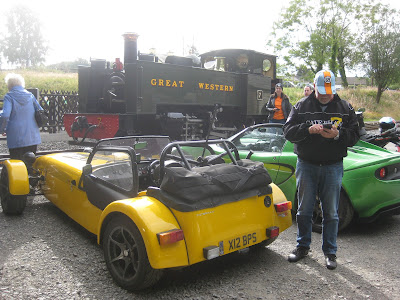 Next stop was another favorite, Devil's bridge station on a narrow gauge steam line. The car park has always been "awkward" to get out of, being on a corner, so they have moved it a little further up the road. Unfortunately we'd all driven in before we found out. once in & seated it was a pleasant as ever, we were visited by wasps in their droves while a group of musicians appeared to play a number of tunes all at the same time. But a steam train arrived & that's always a good thing

Following that we headed up over the Elan Valley road (again) where the rough roads claimed a victim in the form of a Se7en cycle wing stay coming adrift. As is usually the case at these times, tool & spares kits appeared from hidey holes around cars & the traditional cry of "right, what have we got to fix it with then?" could be heard. A temporary but well executed & secure fix was made & we carried on. At the next fuel stop we found Robert, who hadn't been able to come on the tour but had made the Herculean effort of driving four hours to meet us mid-route, driving with us, having tea, then driving four hours home. Good effort that man! So he was with us when we hit the Lake Breanne Road (again). 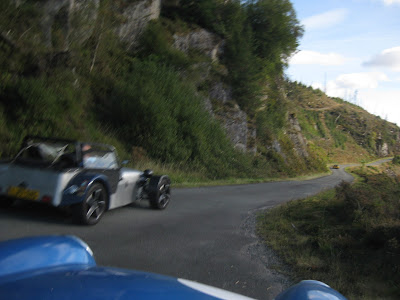 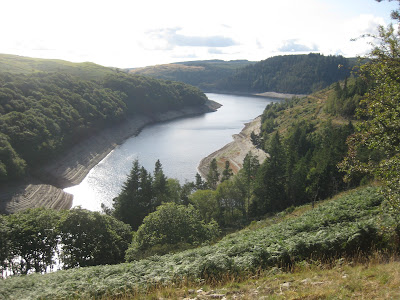 At the end of the day we pulled into the rather small car park of The Roast Ox Inn at Painscastle.

The place itself was excellent, fantastic food, friendly hosts - we couldn't fault it. But there was strangeness. The landlord was said to be called Tony & was heard once or twice, leading to someone describing him as "this mysterious Tony" - a phrase which immediately took on a life of its own & within minutes we had constructed a whole persona for Mysterious Tony, involving a black wide brimmed hat, a red-lined cloak & a maniacal laugh.

But more strangeness was to come when all the staff & management went home & told us partially drunk complete strangers to "help yourselves from the bar, just write down what you had & put money in the honesty box"

Fortunately we didn't want anything else.