Up with the lark because my friends had work to go to, but I had a problem. The SatNav was advising “NO ROUTE POSSIBLE”. It does this when a waypoint is placed on a closed road - & we are VERY fond of closing roads in the UK at the moment. Fortunately the route was a simple one, so I set the SatNav for Torpoint, that took me to the ferry, but through Plymouth’s rush hour. It wasn’t to bad, but the car was steaming up, my glasses were steaming up, there were 30mph average speed cameras, rain & constantly swapping lanes in an unfamiliar town to contend with, But I managed & boarded the ferry. 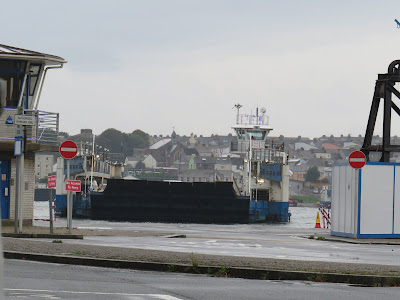 Disembarking on the Cornish side I re-set the SatNav for Looe, where I bagged a roadside parking slot & had a stroll & a coffee before re-setting for Polperro. There’s no-where to park there (OK – there’s no-where to park free), so I re-set again for what I thought was my next point. Only when I realised I was headed due west did I work out I should’ve set it for Launston, not Liskeard.

However, correcting that sent me along some very entertaining roads, so it was not a bad thing.  Next was Bideford, then Barnstaple – where the man from the hotel called while I was in a carpark & asked if I wouldn’t mind checking in after 16:00. 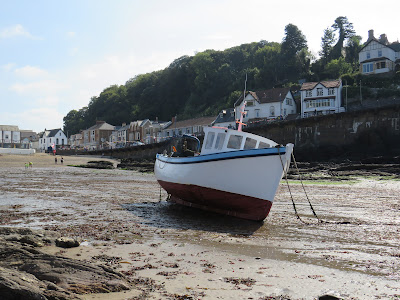 After that I went to Coombe Martin, which was so nice I paid for the parking! I spent a couple of hours wandering, climbing, looking into rock pools – that sort of thing.

Next on the agenda was Lynmouth with another very entertaining road down into the town. Again I had a good wander, a couple of folk asked me about the car & I had a very good & very large fish & chip supper on the beach. 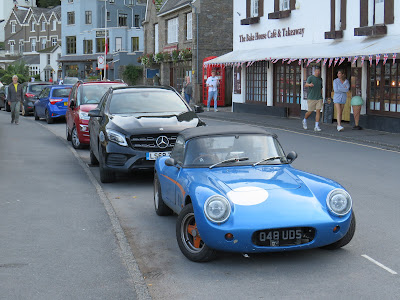 I then returned to the hotel to find that not only was the restaurant closed for the evening, but so was the bar. I must’ve looked very much like a man in need of a drink, because they held the bar open for me while I had a pint of cider, then took another back to my room, had a well deserved bath in my luxury up-grade room, then sat & wrote this.

Tomorrow I would meet up with the other rogues.