After the long wait, the Tuesday finally dawned. There was no point setting off early early because the Fleet Air Arm Museum – my second Port of Call (see what I did there?) didn’t open until 10:00. I emptied the fridge into a lunch bag & put some cold water in a thermos, bleached the sinks, put the dish washer on, wheeled the car out & set off – into the traffic. 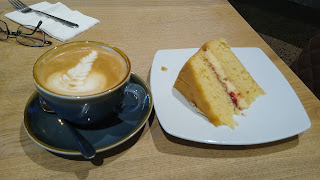 It wasn’t too bad as most of it’s going into London so I rumbled down the M3 / A303 until the SatNav told me to leave, then wended my way across to the A30 until I arrived at “The Udder Farm Shop” were I had coffee & cake – I like cake.

Because all my luggage was in the passenger seat, I put the roof & side windows on, just as well because it was raining when I came out. So I wrestled my way into the car & set off. After not very long it was getting a bit “tropical” very high humidity & temperatures steaming up the windows. I stopped & took the side window off, which helped - note to self, fit window vents over the winter. After a while I arrived at the FAA Museum. I covered up all my belongings, put the side window back in, latched the windows & made for the entrance – which is up a long divided staircase. I got to the top, the automatic doors opened, the wooden doors inside were shut fast. “This must be the exit” I thought, so went back down all the divided stairs & up the other side. The same thing happened except that the automatic doors closed WITH ME STILL INSIDE. I consulted Google to see if it opened at 10:30 maybe. No, it opened Wednesday because HRH had died. Why open the car park?? Why not put a sign at the bottom of the stairs?? 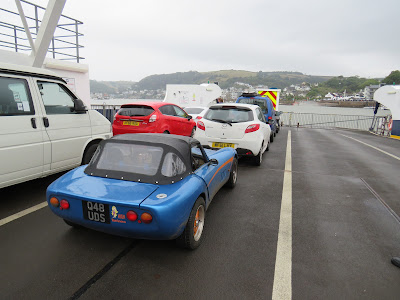 So now I has three hours to kill between my ETA at my friend’s house & them arriving home from work. I took the ferry across the Dart as I had with the Fury at least ten years before & loitered around Dartmouth for a while, I had an excellent ice cream from “The Good Intent” near Bayards Cove, I walked along the prom & took some photos, but with my allotted free parking almost up, I went back to the car & followed my route out of town along the lower lanes – which were closed. I ended up driving up one of the very VERY narrow, cobbled, 1 in 4 streets to the top of town, being very grateful for lots of power & rear wheel drive. 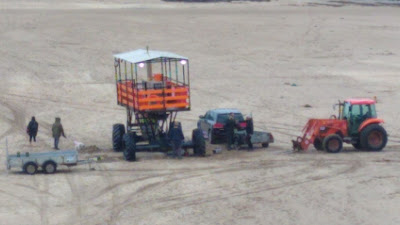 I stopped again at Bigbury & walked on the beach, looked at the “Sea Tractor” that takes you to Burgh Island when the tide’s in & had a coffee, then again wended my way to Wembury. I was still early, so parked up near the beach & had another walk around, arriving at my friend’s only about ten minutes early. I was wet from the outside in & the inside out, but I dried out & we had a very pleasant evening.
Posted by BlatterBeast at 17:04