My second time at the SKCC "Car Limits" day at North Weald & this time I took Daughter-the-younger (who'd passed her driving test two weeks before) & her boyfriend (who had just taken his theory test).

Well Daughter-the-younger drove them both to Crunchie's house in Bracknell (no mean feat in itself) & Crunchie & I each took one of them to North Weald. 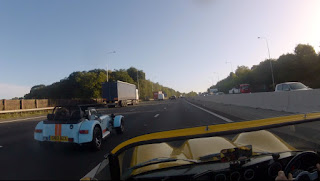 The day then followed the established routine with a driver's briefing, followed by the "High Speed Corner" exercise - as the name suggests go barrelling along a straight & hoik the car into a left hand bend at 60 - 80MPH depending on how brave you're feeling (not very - I was at the 60 end of the range). 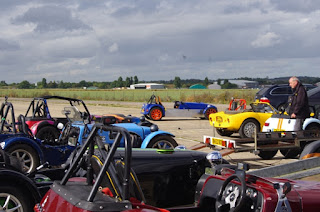 Daughter-the-younger thoroughly enjoyed this, as did the boyfriend & the SKCC once again proved it's mettle by generously offering passenger rides aplenty to the daughter & boyfriend, most of which were taken up (sorry about the screaming guys).

Next up, the group was split in twain & one half did a course on the large tarmac area, the other did a very different course on the smaller one. 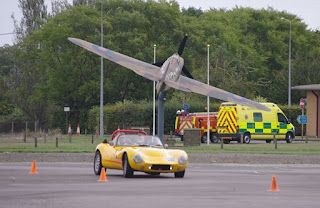 This took us up to lunch time & as the Fury was running low on fuel, I followed the SatNav to the nearest petrol station where a little old lady re-fuelled my car for me & only charged 10p / litre over the normal asking price! "shall I fill it up?" she asked, "NO" I replied rather too quickly & probably an octave or two higher than was strictly necessary "ahem - just 15 litres please" I added in a rather more butch tone. 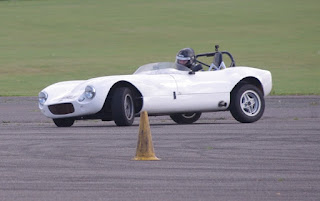 On arrival back at the airfield, I put the passenger seat cushion over the driver's seat & let the youngsters have a go. In spite of not really being able to push the clutch pedal down, daughter-the-younger made a decent job of trundling round the car park. Boyfriend was less successful, but he's a lot less experienced at driving, so being faced with non powered steering, brakes & a clutch you need the leg of a ox to push right down, he struggled a bit. But he managed.

Next year he'll do much better. 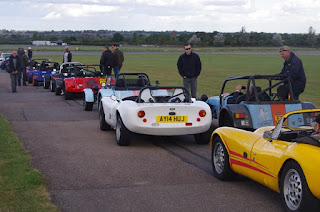 Next, the two groups swapped tracks, before the whole circuit was re-configured into a "sprint course" which was more fun, but less frequent as there were twenty cars queuing up to use it. It was enjoyable, but as with all racing, kind of pointless. It was good to take the car almost flat-out, but for actual enjoyment, give me an N.S.L. B-road any day - preferably the Ullapool to Durness road.

For me the value was in proving that the adjustments I made to the rear camber after last year (when it was prone to over-steer) have worked & the wayward tail has been eradicated. I can take it on blatts with more confidence - which is, after all, the point of a "car limits" day

When it was time to leave, I set the SatNav for home via Crunchie's & was somewhat surprised to see it expected the journey to take 2 1/2 hours.

We set off down the M11 & turned onto the M25 - straight into 20MPH traffic. Fortunately (for us) the hold up was a crash on the other carriageway so we weren't held up for long, but there was a good 5 mile tailback on the other side. Just as we got back to Bracknell the rain came & got pretty heavy. I'd put the roof up, but I was glad to have daughter-the-younger's tail lights to follow, as by then I'd driven five hours getting to the airfield & back, plus the high intensity driving while I was there.

But - all in all a very good day. The Fury worked faultlessly, having the kids there made it even better.

Here's a short vid of my favourite - not my best - run. see if you can spot the mistake I made.