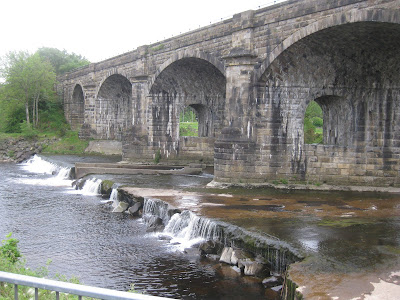 After the best night’s sleep I’ve had in ages I got up & wandered down to the main A69 bridge to take some photos of what appeared to be a waterfall as we drove out yesterday. In fact it’s really just the river tumbling over the foundations of the railway bridge, but quite attractive anyway.

Today we elected to drive a route Duncan had written, the weather was looking foul to the south, but the route headed north. With hoods up we set off from Haltdrizzle & immediately broke the record for the fastest time for the group to be split up. I don’t think we’d even left the hotel grounds! But although we were on different roads we were in radio contact, so weren’t far apart & within a couple of miles we had all joined up again. Heading north on some roads we’d already driven, we soon found ourselves crossing the border & heading for Hawick (Hoik) on the lovely B6399, but turned off just before we arrived in town. 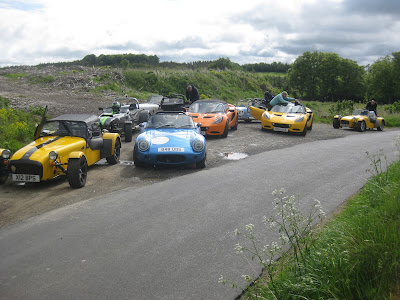 A suitable stopping point was found & as the sky was looking brighter the hoods got stowed & that was about the last we saw of any rain – there was even a little sun – the first proper sun we’d experienced on this trip. Duncan had chosen well & the route featured superbly wriggly, smoothly tarmac’d roads & just about no traffic.

We stopped in the Old School Hub & Tea Room for cake & coffee, then got as far north as Selkirk, where at some road works traffic lights we became the star attraction for some school children. We got separated at a junction & I found myself behind four cars, the front one of which was managing 45 on a very wide, open A road, so I picked the cars off one at a time & eventually caught the lead group & was caught by the group behind me – perfect. 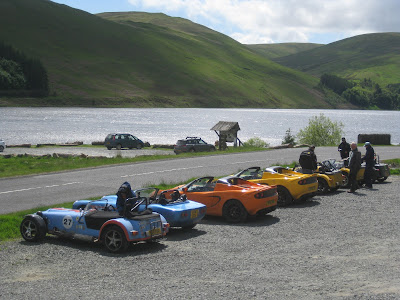 Then heading past St. Mary’s Loch near Moffat we stopped again for more coffee, cake & photos as the sun now well & truly had his hat on. 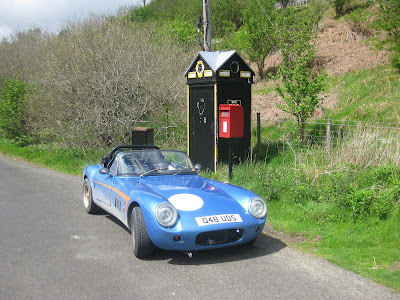 Shortly after this was a stop for a photo with an old AA phone box - pity about the post box, but none of us had a hacksaw wit us. 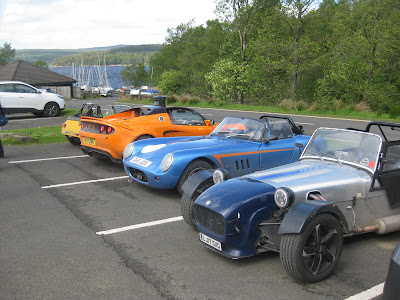 There were more deserted winding roads & we crossed back into England, heading for the Keilder Reservoir visitor centre, once again the car park entrance eluded me, so like last time I went across the grass. I probably parked in the very same space I parked the Fury in in maybe 2017? 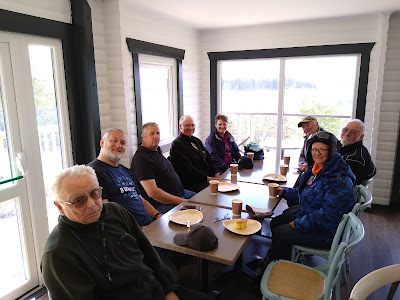 After MORE cake we persuaded Linda to sit on an oversize park bench for comic effect & just as we were strapping in a whole bunch of original minis pulled in & their owners seemed to be dismantling them? Strange folk. Just as we were lined up ready to leave a coach went past, fortunately it didn’t hold us up much as the roads are pretty straight & deserted. 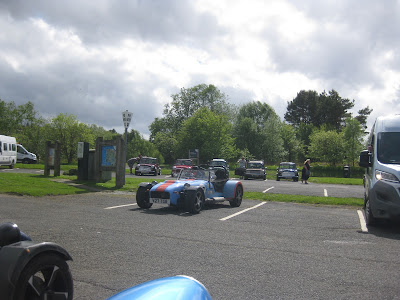 So after some more excellent roads, we ended up back in Haltwhistle.

Discussions have already started about RogueRunners ‘23