Today we headed out of the village going north & then west to avoid the speed camera & were straight into the good roads, passing hamlets by the name of Foul Town & Gap. At Longtown we took a very short detour to avoid another speed camera before briefly following the A7 & then back onto the smaller roads. At Lockerbie, we were going to meet our Scottish contingent, but he had other commitments, so I refuelled & moved on. We bypassed Dumfries on the Dumfries bypass & took the unfeasibly wriggly A712 roughly north west, then due north on the B7000. At Carsphain, we called in at a small tea room (clearly making the proprietor’s day) & while we were there it rained – quite a lot. I rushed out & put the roof on the car.Passing into Ayrshire at Loch Muck, we headed into the wilds with B roads to New Camnock, then the A76 through Kirkconnel, before turning north on B roads again.

Turning south at Biggar the land was getting hilly, we got to Tweedsmuir & turned off the main road to run alongside the Talla & Meggit reservoirs & St Mary’s Loch. I was on my own at this stage having skipped the last fuel stop, so had the chance to pull over & take some atmospheric photos of the car, also taking time to fall arse-over-tit about 6ft down a grass & stone bank to end up spread-eagled on the tarmac – at the age of 61 ½ - tch). A bit of pale sunshine had provoked me to take the roof off again. 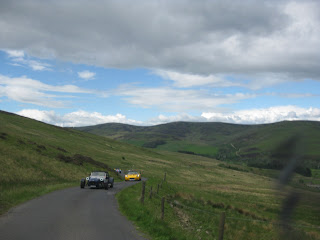 Just after the last of my photo stops I was caught up by the others, still with their hoods on & we drove in the dry but on mostly wet, mostly fantastic roads. We must’ve passed at least a dozen “road ahead closed” signs over a 15 mile stretch – no other information, I trusted the SatNav & sure enough it wasn’t our road that was closed. 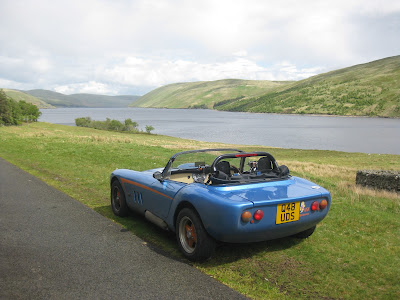 Back on the minor roads The SatNav said “Turn sharp left” - & it WAS sharp, not a problem for the Stylus which has the turning circle of a fork-lift truck, but the others would struggle. After 400 yards there was a gate, I got on the radio & shouted “STOP STOP DON’T FOLLOW THE SatNavs”. There was nowhere to turn round, so I had to reverse 400yds to a field gate, but I’d prevented a rather embarrassing traffic jam.

By now it was properly raining & I still had the hood down, so I just set the destination to Haltwhistle & got there as quickly as I could. I was very wet by this point but just as I arrived, the sum came out & it was a beautifully sunny evening from that point on.