You’ll have guessed where we went already.

We headed out of HALTWHISTLE on a windy back road going north until it crossed the only road called “Military Road” I’ve ever seen that isn’t EPIC – because it follows the route of the Roman wall so it’s pretty much straight (though it does go up & down a LOT). Apparently it was built by the infamous General Wade (I expect he had some help) & a few courses were taken off Hadrian’s Wall to make the foundations. 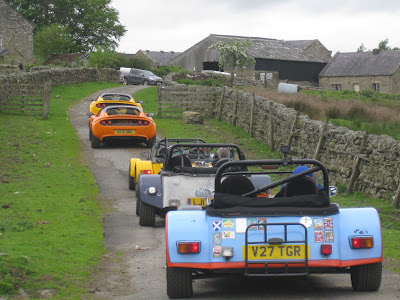 After a B-road over the moor we took the A68 past Catcleugh Reservoir (“cat clue” I believe) & shortly after we entered the land of the Celt & the Pict, there’s a lovely series of fast bends & somewhere around there we turned into a road with a sign that said “GATES”, I thought “It’ll be fine, it’ll just be a set of gates because someone didn’t want to put a cattle grid in”. 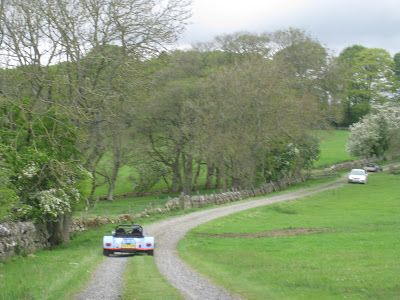 It wasn’t, there were many gates. At the first one I opened it, drove through & closed it behind the last car. On the other side of the gate the surface was a bit worse & this pattern continued until we were driving through a farm yard. But it got worse, through the next gate we were on a cinder track across a sheep field. I switched off my barely functioning radio so the others could swear at me in peace.
After what seemed like two hours our wheels hit tarmac again & at Jedburgh we took on some fuel. 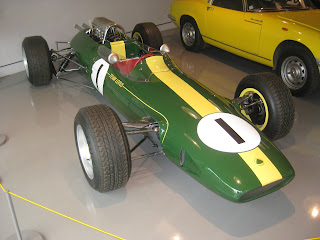 After putting the hoods up due to some rain, next stop was Duns where we were hoping to see the new Jim Clark museum & get a drink – maybe some cake – I like cake. But this museum stands out from every other museum in NOT having a cafe. The man behind the desk directed us into town to “The Jim Clark Bistro” – it was closed. Fortunately there was a small coffee shop open & we were able to get refreshed. By now I was feeling that my first route wasn’t going terribly well.

Leaving DUNS we passed the hamlets of West Blackadder, Blackadder Mains, Blackadder South Lodge, Blackadder Mount & Blackadder Bank before re-entering England at Berwick-Upon-Tweed. There’s not much choice in roads around here, so it was the A1 until we turned aside for Lindisfarne – as we approached the causeway some of our number were heading back saying there was a £5 minimum car park charge, so we also just drove on & off again. 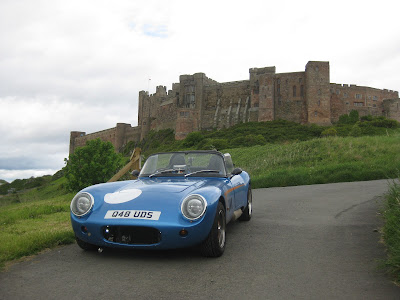 Back to the A1 for almost no time at all as we were heading for Bamburgh where I stopped to take a photo of the Stylus very similar to the photo I took of the Fury on it's first road trip in 2012 - ten years ago! Then the coast road into Seahouses where I caught up with some of the others in a petrol station. 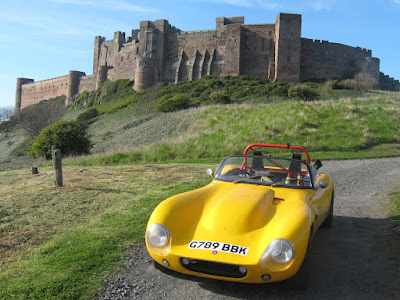 After passing through Alnwick we turned inland with hills on the horizon.  The roads became slowly more EPIC & from a purely driving point of view this was the best part of the day, finishing off with the A686 & it’s hairpins.
Posted by BlatterBeast at 08:02